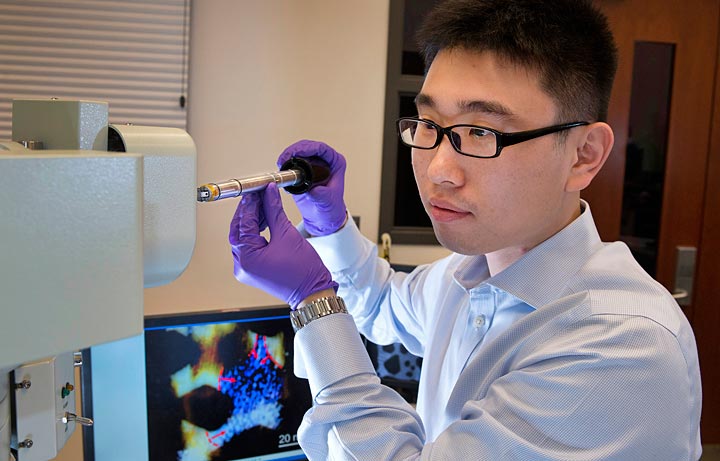 Batteries do not age gracefully. The lithium ions that power portable electronics cause lingering structural damage with each cycle of charge and discharge, making devices from smartphones to tablets tick toward zero faster and faster over time. To stop or slow this steady degradation, scientists must track and tweak the imperfect chemistry of lithium-ion batteries with nanoscale precision.

“Armed with a precise map of the materials’ erosion, we can plan new ways to break the patterns and improve performance.”

“We discovered surprising and never-before-seen evolution and degradation patterns in two key battery materials,” said Huolin Xin, a materials scientist at Brookhaven Lab’s Center for Functional Nanomaterials (CFN) and coauthor on both studies. “Contrary to large-scale observation, the lithium-ion reactions actually erode the materials non-uniformly, seizing upon intrinsic vulnerabilities in atomic structure in the same way that rust creeps unevenly across stainless steel.”

Xin used world-leading electron microscopy techniques in both studies to directly visualize the nanoscale chemical transformations of battery components during each step of the charge-discharge process. In an elegant and ingenious setup, the collaborations separately explored a nickel-oxide anode and a lithium-nickel-manganese-cobalt-oxide cathode—both notable for high capacity and cyclability—by placing samples inside common coin-cell batteries running under different voltages.

“Armed with a precise map of the materials’ erosion, we can plan new ways to break the patterns and improve performance,” Xin said.

In these experiments, lithium ions traveled through an electrolyte solution, moving into an anode when charging and a cathode when discharging. The processes were regulated by electrons in the electrical circuit, but the ions’ journeys—and the battery structures—subtly changed each time.

For the nickel-oxide anode, researchers submerged the batteries in a liquid organic electrolyte and closely controlled the charging rates. They stopped at predetermined intervals to extract and analyze the anode. Xin and his collaborators rotated 20-nanometer-thick sheets of the post-reaction material inside a carefully calibrated transmission electron microscope (TEM) grid at CFN to catch the contours from every angle—a process called electron tomography. 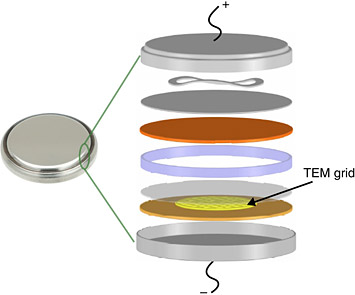 In the experimental coin cell setup, a carbon supported transmission electron microscopy (TEM) grid loaded with a small amount of the nickel-oxide material was pressed against the bulk anode and submerged in the same electrolyte environment.

To see the way the lithium-ions reacted with the nickel oxide, the scientists used a suite of custom-written software to digitally reconstruct the three-dimensional nanostructures with single-nanometer resolution. Surprisingly, the reactions sprang up at isolated spatial points rather than sweeping evenly across the surface.

“Consider the way snowflakes only form around tiny particles or bits of dirt in the air,” Xin said. “Without an irregularity to glom onto, the crystals cannot take shape. Our nickel oxide anode only transforms into metallic nickel through nanoscale inhomogeneities or defects in the surface structure, a bit like chinks in the anode’s armor.”

In the other study, scientists sought the voltage sweet-spot for the high-performing lithium-nickel-manganese-cobalt-oxide (NMC) cathode: How much power can be stored, at what intensity, and across how many cycles?

The answers hinged on intrinsic material qualities and the structural degradation caused by cycles at 4.7 volts and 4.3 volts, as measured against a lithium metal standard.

As revealed through another series of coin-cell battery tests, 4.7 volts caused rapid decomposition of the electrolytes and poor cycling—the higher power comes at a price. A 4.3-volt battery, however, offered a much longer cycling lifetime at the cost of lower storage and more frequent recharges.

In both cases, the chemical evolution exhibited sprawling surface asymmetries, though not without profound patterns.

Each orange dot in these scanning transmission electron microscopy (STEM) images represents one atomic column in the NMC cathode. The scientists found that the lithium ions tended to travel along the vertical channels between atomic layers. After one full charge/discharge cycle, the surface layers (the edge beyond the blue line) exhibited the atomic disordering that ultimately diminishes battery performance.

“As the lithium ions race through the reaction layers, they cause clumping crystallization—a kind of rock-salt matrix builds up over time and begins limiting performance,” Xin said. “We found that these structures tended to form along the lithium-ion reaction channels, which we directly visualized under the TEM. The effect was even more pronounced at higher voltages, explaining the more rapid deterioration.”

Identifying this crystal-laden reaction pathways hints at a way forward in battery design.

“It may be possible to use atomic deposition to coat the NMC cathodes with elements that resist crystallization, creating nanoscale boundaries within the micron-sized powders needed at the cutting-edge of industry,” Xin said. “In fact, Berkeley Lab battery experts Marca Doeff and Feng Lin are working on that now.”

Shirley Meng, a professor at UC San Diego’s Department of NanoEngineering, added, “This beautiful study combines several complementary tools that probe both the bulk and surface of the NMC layered oxide—one of the most promising cathode materials for high-voltage operation that enables higher energy density in lithium-ion batteries. The meaningful insights provided by this study will significantly impact the optimization strategies for this type of cathode material.”

The TEM measurements revealed the atomic structures while electron energy loss spectroscopy helped pinpoint the chemical evolution—both carried out at the CFN. Further crucial research was conducted at SLAC’s SSRL and Berkeley Lab’s National Center for Materials Synthesis, Electrochemistry, and Electron Microscopy, with computational support from the National Energy Research Supercomputer Center and the Extreme Science and Engineering Discovery Environment.

“The chemical reactions involved in these batteries are startlingly complex, and we need even more advanced methods of interrogation,” Xin said. “My CFN colleagues are developing ways to watch the reactions in real-time rather than the stop-and-go approach we used in these studies.”