New technique developed at Brookhaven Lab makes self-assembly 1,000 times faster and could be used for industrial-scale solar panels and electronics 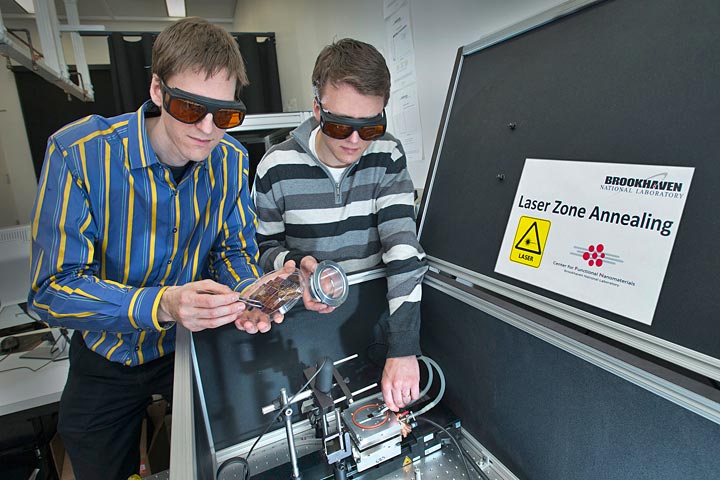 Nanoscale materials feature extraordinary, billionth-of-a-meter qualities that transform everything from energy generation to data storage. But while a nanostructured solar cell may be fantastically efficient, that precision is notoriously difficult to achieve on industrial scales. The solution may be self-assembly, or training molecules to stitch themselves together into high-performing configurations.

Now, scientists at the U.S. Department of Energy’s Brookhaven National Laboratory have developed a laser-based technique to execute nanoscale self-assembly with unprecedented ease and efficiency.

“We design materials that build themselves,” said Kevin Yager, a scientist at Brookhaven’s Center for Functional Nanomaterials (CFN). “Under the right conditions, molecules will naturally snap into a perfect configuration. The challenge is giving these nanomaterials the kick they need: the hotter they are, the faster they move around and settle into the desired formation. We used lasers to crank up the heat.”

“We created extremely uniform self-assembled structures in less than a second.”

“We created extremely uniform self-assembled structures in less than a second,” Majewski said. “Beyond the extraordinary speed, our laser also reduced the defects and degradations present in oven-heated materials. That combination makes LZA perfect for carrying small-scale laboratory breakthroughs into industry.”

The scientists prepared the materials and built the LZA instrument at the CFN. They then analyzed samples using advanced electron microscopy at CFN and x-ray scattering at Brookhaven’s now-retired National Synchrotron Light Source (NSLS)—both DOE Office of Science User Facilities.

“It was enormously gratifying to see that our predictions were accurate—the enormous thermal gradients led to a correspondingly enormous acceleration!” Yager said. 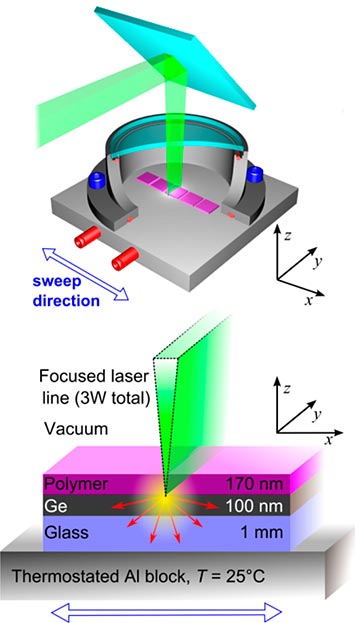 Illustration of the Lazer Zone Annealing instrument showing the precise laser (green) striking the un-assembled polymer (purple). The extreme thermal gradients produced by the laser sweeping across the sample cause rapid and pristine self-assembly.

Imagine preparing a complex cake, but instead of baking it in the oven, a barrage of lasers heats it to perfection in an instant. Beyond that, the right cooking conditions will make the ingredients mix themselves into a picture-perfect dish. This nanoscale recipe achieves something equally extraordinary and much more impactful.

The researchers focused on so-called block copolymers, molecules containing two linked blocks with different chemical structures and properties. These blocks tend to repel each other, which can drive the spontaneous formation of complex and rigid nanoscale structures.

“The price of their excellent mechanical properties is the slow kinetics of their self-assembly,” Majewski said. “They need energy and time to explore possibilities until they find the right configuration.”

In traditional block copolymer self-assembly, materials are heated in a vacuum-sealed oven. The sample is typically “baked” for a period of 24 hours or longer to provide enough kinetic energy for the molecules to snap into place—much too long for commercial viability. The long exposure to high heat also causes inevitable thermal degradation, leaving cracks and imperfections throughout the sample.

The LZA process, however, offers sharp spikes of heat to rapidly excite the polymers without the sustained energy that damages the material.

“Within milliseconds, the entire sample is beautifully aligned,” Yager said. “As the laser sweeps across the material, the localized thermal spikes actually remove defects in the nanostructured film. LZA isn’t just faster, it produces superior results.”

LZA generates temperatures greater than 500 degrees Celsius, but the thermal gradients—temperature variations tied to direction and location in a material—can reach more than 4,000 degrees per millimeter. While scientists know that higher temperatures can accelerate self-assembly, this is the first proof of dramatic enhancement by extreme gradients.

“Years ago, we observed a subtle hint that thermal gradients could improve self-assembly,” Yager said. “I became obsessed with the idea of creating more and more extreme gradients, which ultimately led to building this laser setup, and pioneering a new technique.”

The researchers needed a high concentration of technical expertise and world-class facilities to move the LZA from proposal to execution.

“Only at the CFN could we develop this technique so quickly,” Majewski said. “We could do rapid instrument prototyping and sample preparation with the on-site clean room, machine shop, and polymer processing lab. We then combined CFN electron microscopy with x-ray studies at NSLS for an unbeatable evaluation of the LZA in action.”

Added Yager, “The ability to make new samples at the CFN and then walk across the street to characterize them in seconds at NSLS was key to this discovery. The synergy between these two facilities is what allowed us to rapidly iterate to an optimized design.”

“We burned a few films initially before we learned the right operating conditions,” Majewski said. “It was really exciting to see the first samples being rastered by the laser and then using NSLS to discover exactly what happened.”

Future of the technique

The LZA is the first machine of its kind in the world, but it signals a dramatic step forward in scaling up meticulously designed nanotechnology. The laser can even be used to “draw” structures across the surface, meaning the nanostructures can assemble in well-defined patterns. This unparalleled synthesis control opens the door to complex applications, including electronics.

“There’s really no limit to the size of a sample this technique could handle,” Yager said. “In fact, you could run it in a roll-to-roll mode—one of the leading manufacturing technologies.”

The scientists plan to further develop the new technique to create multi-layer structures that could have immediate impacts on anti-reflective coatings, improved solar cells, and advanced electronics.

This research and operations at CFN and NSLS were funded by the DOE Office of Science.