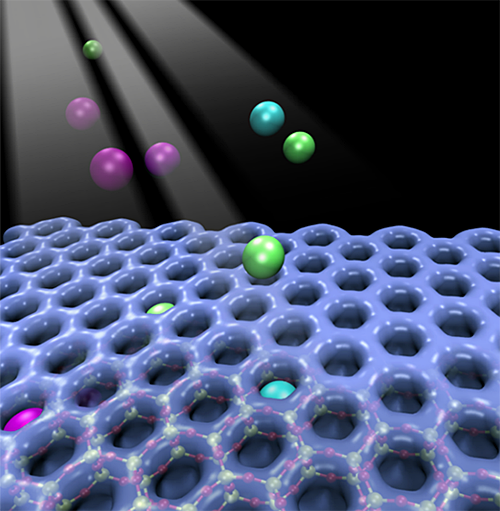 Illustration of individual atoms of Ar, Kr, and Xe getting trapped in a 2-D array of hexagonal prism silicate nanocages

Scientists discovered a mechanism by which nanocages trap single atoms of argon (Ar), krypton (Kr), and xenon (Xe) at room temperature (T) and selectively release afterwards at a higher temperature.

Noble gases are the most unreactive elements in the periodic table and in our daily life. Capturing noble gases is an industrially relevant challenge for energy, environment, and health applications, such as noble gas separations, nuclear waste remediation, and the removal of radon. One such example is the removal of radioactive isotopes of krypton (Kr) and xenon (Xe) in nuclear reactors, which is an important step in environmental radiation protection but it is hard to control. The challenge of trapping noble gases stems from their unreactive nature and the fact that they are in gas form at room temperature and at much colder temperatures. The condensation temperatures for all noble gases are as follows: helium (He) at about -452 Fahrenheit (F) or 4 Kelvin, neon (Ne) at about -411 F or 27 K, argon (Ar) at about -303 F or  87 K, Kr at about -243 F or 87 K, Xe at about -162 F or 165 K, and radon (Rn) at about -79 F or  211 K. Consequently, immobilizing them on a surface normally requires very low temperatures. Intensive research efforts have been devoted to the fundamental understanding of intrinsic physical and chemical properties of isolated noble gas atoms in confinement.

In this study, a team of scientists reports that they have been able to capture noble gas atoms (Ar, Kr, and Xe) inside nanocages of ultrathin silica and aluminosilicate crystalline nanoporous frameworks at 300 K or ~80 F. The scientists attribute the capturing capability of their nanomaterial to a novel activated physisorption mechanism, facilitated by ionization of noble gas atoms to make them positively charged. The scientists combined density functional theory (DFT) studies with x-ray photoelectron spectroscopy (XPS) at the In situ and Operando Soft X-ray Spectroscopy (IOS) beamline at the National Synchrotron Light Source II (NSLS-II)—a U.S. Department of Energy (DOE) Office of Science User Facility at DOE’s Brookhaven National Laboratory—and the X1A1 beamline at the National Synchrotron Light Source (NSLS)—NSLS-II’s predecessor—to provide evidence of an initial ionization process that significantly reduces the apparent trapping barrier. The NSLS-II x-rays played a crucial role in this work, as they were not only used for the measurement, but they were also responsible for the ionization needed to trap the gases.

After entering the confined space in the structure, the noble gas ions are neutralized and their desorption requires unprecedentedly high temperatures, even in ultrahigh vacuum conditions, potentially keeping the gases contained below these temperatures. For 2-D aluminosilicate films these temperatures are ~166 F or 348 K for Ar, ~436 F or 498 K for Kr, and ~751 F or 673 K for Xe. DFT calculations also predicted that Rn can be trapped in 2-D aluminosilicates with an even higher desorption temperature of 775 K or about 935 F.

This work shows how individual noble gas atoms (Ar, Kr, Xe, and Rn) can be trapped at 300 K in hexagonal prism nanocages (0.5 nm) of 2-D silica and aluminosilicate by activated physisorption, while He and Ne are too small to remain in the cages. This study opens up exciting opportunities for studying individual gas atoms under spatial confinement at high temperature with great detail, using extremely sensitive surface science techniques. Additionally, a variety of applications in gas capture and separation, with important implications in the environment and health, can use this work as a baseline for future developments.

Research was carried out at the 23-ID-2 (IOS) beamline of the National Synchrotron Light Source II and the Center for Functional Nanomaterials, which are U.S. Department of Energy Office of Science Facilities, and the Scientific Data and Computing Center, a component of the Computational Science Initiative, at the Brookhaven National Laboratory, under Contract No. DE-SC0012704.This research also used resources of the National Energy Research Scientific Computing Center, a DOE Office of Science User Facility supported by the Office of Science of the U.S. Department of Energy under Contract No. DE-AC02-05CH11231. J.-Q.Z. and M.W. were supported by BNL LDRD Project No. 15-010.