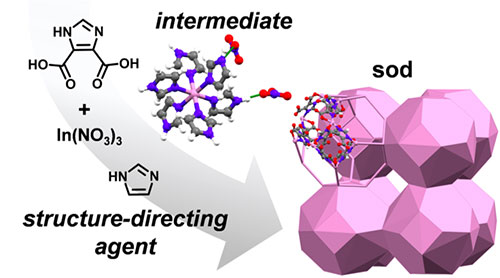 Customized MOFs are used for gas separation and catalysis; understanding how SDAs direct MOF formation will allow for a more rational and straightforward design of MOFs.

Gas separation applications, catalysts, and next-generation electronic devices can benefit from so-called metal-organic frameworks (MOFs). MOFs are complex molecular structures that are routinely built from small, flat, and relatively simple organic molecules – here referred to as structure-directing agents, or SDAs –, through a synthesis process. The effectiveness of MOFs depends on how the original atomic building blocks are arranged in 3D space during synthesis. However, based on the current knowledge of MOF formation, scientists have a hard time predicting the relationship between reaction parameters and outcomes.

In this study, a team of researchers investigated the role of SDAs during synthesis and discovered the formation of an SDA-based intermediate along the reaction pathway. This realization indicates that the role of the small SDA molecules goes beyond the current paradigm, that these additives are benign and balancing observers. Instead, they are reactive participants.

The team investigated an indium-based MOF system that is known to arrange into a variety of 3D architectures. They employed a combination of solid-state and liquid-state monitoring techniques to follow the synthesis process and witnessed the formation of an SDA-based intermediate along the reaction pathway. Among these monitoring techniques, the researchers used the X-ray Powder Diffraction (XPD) beamline at the National Synchrotron Light Source II (NSLS-II). NSLS-II is a U.S. Department of Energy (DOE) Office of Science User Facility located at DOE’s Brookhaven National Laboratory and offers access to a wide range of materials characterization tools to researcher from industry and academia.

Understanding the complex role structure-directing agents play in the reaction pathway will give researchers the tools needed to accomplish the synthesis of materials with predetermined and desirable structures.