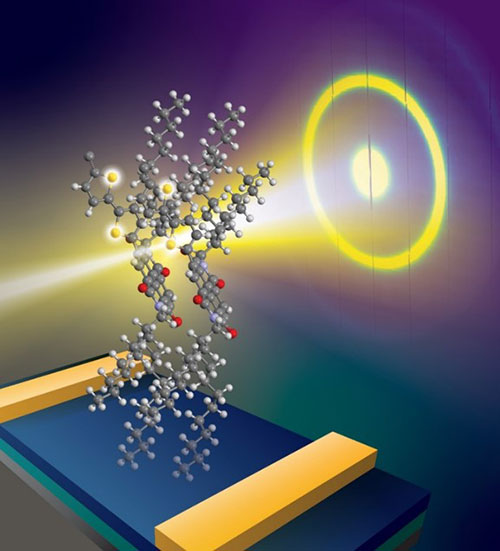 Polymers are hard to study with x-ray diffraction, as they are disordered and interact weakly with x-rays. Tuning the wavelength so that the x-rays resonate with sulfur atoms allows new information about their microstructure to be unlocked, aiding in the development of devices based on semiconducting polymers.

From light-emitting diodes and organic solar cells to organic field-effect transistors and sensors, optoelectronic devices offer a wide range of applications. Many optoelectronic devices are made from conjugated polymers – organic macromolecules that have a backbone chain of molecules with alternating double- and single-bonds. The properties of devices made from conjugated polymers depend critically on the molecular packing; however, these materials are paracrystalline, which means they only possess a short-range or medium-range order, but no long-range order, in their packing structure. This lack of overall order limits the amount of information scientists can collect about these materials using traditional techniques, such as regular x-ray diffraction.

In this work, a team of scientists used resonant tender x-ray diffraction, also known as anomalous diffraction, to investigate a well-known electron transporting polymer. By tuning the x-rays to match – or be resonant with – the absorption energy of elements within the sample, scientists can unlock new information, such as the position and orientation of an atom in the material. For this research, the team matched the energy of sulfur atoms within their optoelectronic material. However, reaching the tender x-rays energies to match sulfur’s absorption requires highly specialized tools and a very bright x-ray source.

To achieve this, the team used beamlines at the Australian Synchrotron and National Synchrotron Light Source II (NSLS-II). At NSLS-II, the researchers used the Soft Matter Interfaces (SMI) beamline, which could reach this elusive energy. As a U.S. Department of Energy (DOE) Office of Science User Facility located at DOE’s Brookhaven National Laboratory, NSLS-II offers a wide range of x-ray scattering and spectroscopy capabilities for research in many fields including soft materials such the SMI beamline.

By using this novel capability of the SMI beamline, the team revealed a strong modulation of the diffraction intensity that matched the calculated molecular packing for their sample. The observed modulation of the intensity shows how the resonant diffraction is dependent on the energy of the x-rays and the structure it is interacting with. Through theoretical calculation, the scientists showed that the observed behavior can be reproduced and can, therefore, be transferred to other materials.

This study opens a new way to unlock important microstructural information about conjugated polymers for which only a handful of diffraction peaks are typically available.

This research used the Soft Matter Interfaces Beamline (SMI, Beamline 12-ID) of the National Synchrotron Light Source II, a U.S. Department of Energy (DOE) Office of Science User Facility operated for the DOE Office of Science by Brookhaven National Laboratory under Contract No. DE-SC0012704. This work was also conducted in part at the SAXS/WAXS and Soft X-ray beamlines at the Australian Synchrotron, part of ANSTO. C.R.M. thanks Dean DeLongchamp for hosting his sabbatical stay at NIST, and Monash University for financing his Outside Studies Programme, which enabled this research to find its genesis.