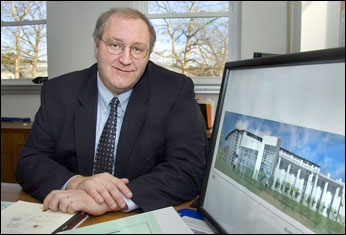 With a staff of about 180 and an annual budget of about $50 million, the BES Directorate is responsible for overseeing research in chemistry, condensed matter physics, materials science and nanoscience. Nanoscience, the study of materials at ultra-small dimensions, will expand at Brookhaven's Center for Functional Nanomaterials, a state-of-the-art facility that began preliminary operations in 2007 and is expected to be fully operating in the spring.

"Brookhaven Lab has outstanding scientists, extraordinary facilities, and an important role to play in addressing the nation's research needs," Misewich said. "I am honored to have an opportunity to be part of the management team that will help the Lab grow into an even more important contributor to the DOE mission to secure energy independence for our nation." Misewich envisions BES research scientists collaborating with researchers from across the Laboratory, universities and industry to provide scientific leadership for key research challenges in the area of energy sciences.

Misewich has made significant contributions in several fields, including optics, nanomaterials, ultrafast studies, and surface science. As Chair of Brookhaven's Condensed Matter Physics and Materials Science Department, Misewich developed new research programs focusing on the synthesis of high-quality materials and new materials, the high-precision characterization of the physical properties of these materials, and the theoretical understanding of them.

Jim Misewich earned his Ph.D. from Cornell University in 1984 in physical chemistry, with a focus on surface science. He then joined the laser physics group at the IBM Thomas J. Watson Research Center in Yorktown Heights, NY. In 2002, he came to Brookhaven as Chair of the Materials Science Department and later became Chair of the Condensed Matter Physics and Materials Science Department. In June 2007, he became Interim Associate Laboratory Director, a position he held until his current appointment. He is a Fellow of the American Physical Society and the Optical Society of America.