Turning Up the Heat to Create New Nanostructured Metals

Scientists used heat to drive a spontaneous process in which different metals mixed to form 3-D interlocking nanostructures in thin films, with applications for catalysts, solar cells, and biomedical sensors 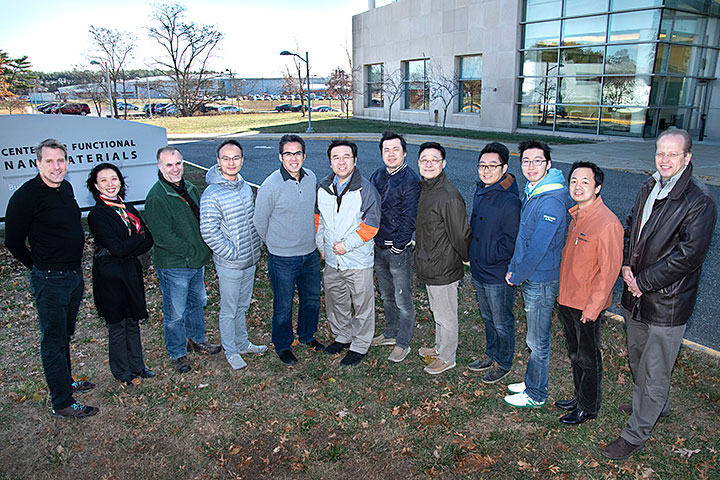 UPTON, NY—Scientists have developed a new approach for making metal-metal composites and porous metals with a 3-D interconnected “bicontinuous” structure in thin films at size scales ranging from tens of nanometers to microns. Metallic materials with this sponge-like morphology—characterized by two coexisting phases that form interpenetrating networks continuing over space—could be useful in catalysis, energy generation and storage, and biomedical sensing. Called thin-film solid-state interfacial dealloying (SSID), the approach uses heat to drive a self-organizing process in which metals mix or de-mix to form a new structure. The scientists used multiple electron- and x-ray-based techniques (“multimodal analysis”) to visualize and characterize the formation of the bicontinuous structure.

“Heating gives the metals some energy so that they can interdiffuse and form a self-supported thermodynamically stable structure,” explained Karen Chen-Wiegart, an assistant professor in Stony Brook University’s (SBU) Materials Science and Chemical Engineering Department, where she leads the Chen-Wiegart Research Group, and a scientist at the National Synchrotron Light Source II (NSLS-II)—a U.S. Department of Energy (DOE) Office of Science User Facility at Brookhaven National Laboratory. “SSID has been previously demonstrated in bulk samples (tens of microns and thicker) but results in a size gradient, with a larger structure on one side of the sample and a smaller structure on the other side. Here, for the first time, we successfully demonstrated SSID in a fully integrated thin-film processing, resulting in a homogenous size distribution across the sample. This homogeneity is needed to create functional nanostructures.” 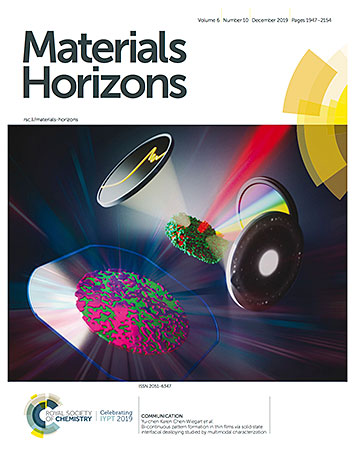 The cover of the Nov. 18 online issue of Materials Horizons illustrates the multimodal, multiscale characterization of bicontinuous thin films formed by thin-film solid-state interfacial dealloying (SSID). It shows a light shining on the films, and the resulting signals being detected by various x-ray and electron-based techniques.

Chen-Wiegart is the corresponding author on a paper published online in Materials Horizons that is featured on the Nov. 18 online journal issue cover. The other collaborating institutions are the Center for Functional Nanomaterials (CFN)—another DOE Office of Science User Facility at Brookhaven Lab—and the National Institute of Standards and Technology (NIST).

To demonstrate their process, the scientists prepared magnesium (Mg) and iron (Fe) and nickel (Ni) alloy thin films on silicon (Si) wafer substrates in the CFN Nanofabrication Facility. They heated the samples to high temperature (860 degrees Fahrenheit) for 30 minutes and then rapidly cooled them down to room temperature.

“We found that Mg diffuses into the Fe-Ni layer, where it combines only with Ni, while Fe separates from Ni,” said first author Chonghang Zhao, a PhD student in the Chen-Wiegart Research Group. “This phase separation is based on enthalpy, an energy measurement that determines whether the materials are “happily” mixing or not, depending on properties such as their crystal structure and bonding configurations. The nanocomposite can be further treated to generate a nanoporous structure through chemically removing one of the phases.”

A schematic showing thin-film SSID for the Fe-Ni/Mg system. The thin films of Mg and Fe-Ni are layered on top of an Si substrate. Upon exposure to heat, the Mg dealloys Fe-Ni to form an Mg-Ni composite and pure Fe with a 3-D bicontinuous structure.

Nanoporous structures have many applications, including photocatalysis. For example, these structures could be used to accelerate the reaction in which water is split into oxygen and hydrogen—a clean-burning fuel. Because catalytic reactions happen on material surfaces, the high surface area of the pores would improve reaction efficiency. In addition, because the nanosized “ligaments” are inherently interconnected, they do not need any support to hold them together. These connections could provide electrically conductive pathways.

The team identified the dealloyed bicontinuous structure of Fe and Ni-Mg through complementary electron microscopy techniques at the CFN and x-ray synchrotron techniques at two NSLS-II beamlines: the Hard X-ray Nanoprobe (HXN) and Beamline for Materials Measurement (BMM).

“Using the scanning mode in a transmission electron microscope (TEM), we rastered the electron beam over the sample in specific locations to generate 2-D elemental maps showing the spatial distribution of elements,” explained Kim Kisslinger, a technical associate in the CFN Electron Microscopy research group and the point of contact for the instrument.

The scientists used a scanning transmission electron microscope (STEM) to study the structure and composition of Fe-Ni films dealloyed by an Mg film. In particular, they combined high-angle annular dark-field (HAADF) imaging with energy-dispersive x-ray spectroscopy (EDS). HAADF imaging is sensitive to the atomic number of elements in the sample. Elements with a higher atomic number scatter more electrons, causing them to appear brighter in the resulting greyscale image. For the EDS maps, the different colors correspond to individual elements and the color intensity to their local relative concentration. STEM analysis revealed the formation of two phases: pure Fe (magenta) and an Ni-Mg (yellow-purple) composite.

“With HXN, we can focus hard, or high-energy, x-rays to a very tiny spot of about 12 nanometers,” said coauthor and HXN physicist Xiaojing Huang. “The world-leading spatial resolution of hard x-ray microscopy at HXN is sufficient to see the sample’s smallest structures, which range in size from 20 to 30 nanometers. Though TEM provides higher resolution, the field of view is limited. With the x-ray microscope, we were able to observe the 3-D element distributions within a bigger area so that we could confirm the homogeneity.”

Measurements at HXN were conducted in a multimodality manner, with the simultaneous collection of x-ray scattering signals that reveal 3-D structure and fluorescence signals that are element-sensitive. Atoms emit fluorescence when they jump back to their lowest-energy (ground) state after being excited to an unstable higher-energy state in response to the x-ray energy. By detecting this characteristic fluorescence, scientists can determine the type and relative abundance of elements present at specific locations.

A video based on the 3-D x-ray fluorescence nanotomography of the Fe-Ni thin film conducted at the Hard X-ray Nanoprobe.

Now that the scientists have shown that SSID works in thin films, their next step is to address the “parasitic” events they identified in the course of this study. For example, they discovered that Ni diffuses into the Si substrate, leading to voids, a kind of structural defect. They will also make pore structures from the metal-metal composites to demonstrate applications such as photocatalysis, and apply their approach to other metal systems, including titanium-based ones.

This work was in part supported by a student fellowship by the Brookhaven-SBU Joint Photon Sciences Institute and the National Science Foundation’s Faculty Early Career Development Program and Metals and Metallic Nanostructures Program.