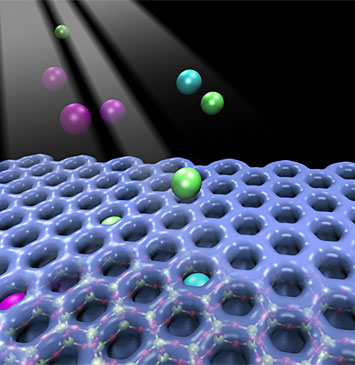 Illustration of Individual atoms of Ar, Kr, and Xe getting trapped in a 2D-array of hexagonal prism silicate nanocages.

CFN scientists and collaborators discovered the mechanism by which two-dimensional nano-cages trap and separate single atoms of argon (Ar), krypton (Kr), and xenon (Xe) at room temperature. The work demonstrates the reduction of the expected trapping barrier by using both x-ray photoelectron spectroscopy (XPS) and density functional theory (DFT).

The nanoscale confinement of noble gases at noncryogenic temperatures is crucial for many applications including noble gas separations, nuclear waste remediation, and the removal of radon. However, this process is extremely difficult primarily due to the weak trapping forces of the host matrices upon noble gas physisorption. Herein, the formation of 2D clathrate compounds, which result from trapping noble gas atoms (Ar, Kr, and Xe) inside nanocages of ultrathin silica and aluminosilicate crystalline nanoporous frameworks at 300 K, is reported. The formation of the 2D clathrate compounds is attributed to a novel activated physisorption mechanism, facilitated by ionization of noble gas atoms. Combined X-ray photoelectron spectroscopy (XPS) and density functional theory (DFT) studies provide evidence of an initial ionization process that significantly reduces the apparent trapping barrier. Noble gas ions become neutralized upon entering the cages, and their desorption requires unprecedentedly high temperatures, even in ultrahigh vacuum conditions. From 2D aluminosilicate films these temperatures are 348 K for Ar, 498 K for Kr, and 673 K for Xe. DFT calculations also predict that Rn can be trapped in 2D aluminosilicates with an even higher desorption temperature of 775 K.  This work highlights a new ionization-facilitated trapping mechanism resulting in the thinnest family of clathrates ever reported.

The CFN Advanced UV and X-ray Probes Facility was used for the ambient-pressure XPS measurements, operated in partnership with NSLS-II. The CFN Theory and Computation Facility was also used for this study.

Research was carried out at the Center for Functional Nanomaterials and the Scientific Data and Computing Center, a component of the Computational Science Initiative and the 23-ID-2 (IOS) beamline of the National Synchrotron Light Source II, Brookhaven National Laboratory, which are supported by the U.S. Department of Energy, Office of Basic Energy Sciences, under Contract No. DE-SC0012704. This research used resources of the National Energy Research Scientific Computing Center, a DOE Office of Science User Facility supported by the Office of Science of the U.S. Department of Energy under Contract No. DE-AC02-05CH11231. J.-Q.Z. and M.W. were supported by BNL LDRD Project No. 15-010. J.-Q.Z. and J.A.B. were the main experimenters. M.W., Q.W., and D.L. carried out the DFT calculations. J.-Q.Z. and M.W. wrote the manuscript. N.A., J.D.K., T.N., and A.M.B. participated in the experiments. All authors participated in discussions, data analysis, and manuscript preparation. J.A.B. and D.L. supervised the experimental and theoretical work, respectively.