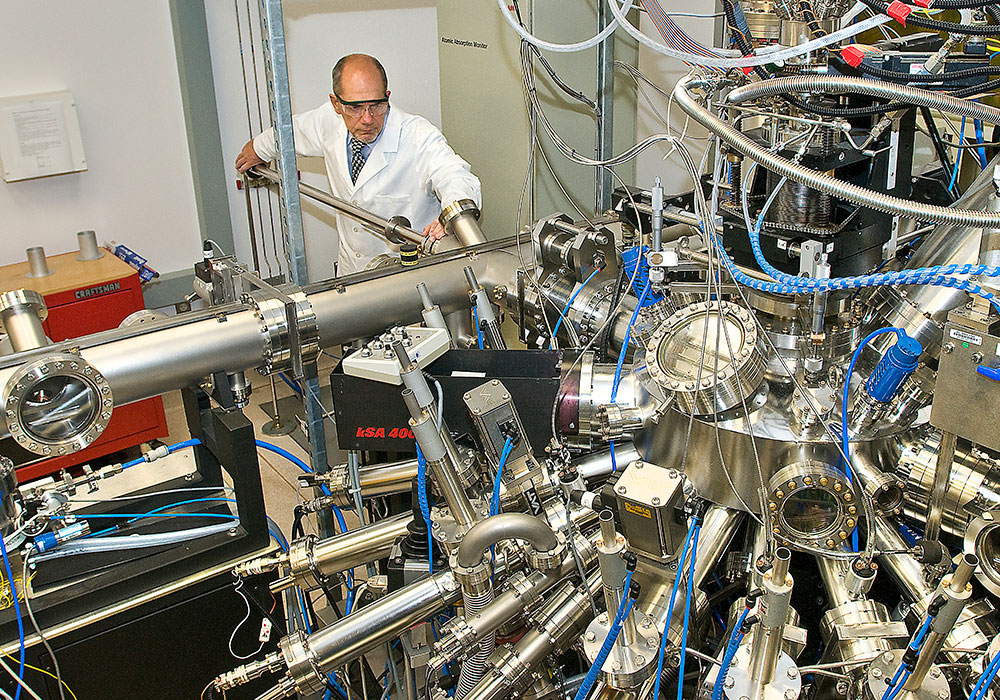 Ivan Bozovic with the atomic-layer-by-layer synthesis system he developed and uses at Brookhaven Lab to engineer superconducting materials one atomic layer at a time. Perfect crystallographic samples are needed to study the true properties of superconductors (rather than properties caused by sample defects or impurities).

UPTON, NY—The American Physical Society (APS) has selected physicist Ivan Bozovic of the U.S. Department of Energy’s (DOE) Brookhaven National Laboratory as a co-recipient of the 2021 James C. McGroddy Prize for New Materials. Established in 1997 and endowed by IBM and the APS Division of Materials Physics, this prize recognizes outstanding achievement in the science and application of new materials.

Bozovic, James Eckstein of the University of Illinois at Urbana-Champaign, and Darrell Schlom of Cornell University were selected “For pioneering the atomic-layer-by-layer synthesis of new metastable complex-oxide materials, and the discovery of resulting novel phenomena.”

Bozovic—a senior scientist in Brookhaven Lab’s Condensed Matter Physics and Materials Science (CMPMS) Division and leader of the division’s Oxide Molecular Beam Epitaxy Group, and an adjunct professor in the Department of Chemistry at Yale University—designed and constructed a molecular beam epitaxy (MBE) system for growing thin films of complex oxide materials. This system directs beams of atoms onto a base material, building up one layer at a time. Previously, no comparable method existed for synthesizing oxide films containing multiple layers with different chemical compositions—for example, copper-oxide (cuprate) superconductors, or materials that conduct electricity without resistance.

“When Jim, Darrell, and I started growing cuprate films by MBE, the scientific community thought our approach was exotic, complicated, and risky,” said Bozovic. “I am most grateful to Brookhaven leadership and the DOE for their persistent support, which made it possible to develop the technique to its present level. Oxide MBE is now a mainstream technique in condensed matter physics that is used by numerous groups in the United States and worldwide for the synthesis of complex oxides with various functionalities. And I believe that we have only touched the tip of the iceberg.”

The inside of the custom-designed system for growing thin films one atomic layer at a time, with an artist's rendition of the process.

Leveraging this system, Bozovic made a series of discoveries on cuprates over the past two decades. Cuprates are among the high-temperature superconductors, so named for their ability to perfectly conduct electricity at temperatures hundreds of degrees above the near-absolute-zero ones required by conventional superconductors. Understanding the unusual behaviors of cuprates could pave the way for engineering materials that become superconducting at room temperature, which may enable practical applications such as power grids that never lose energy, small but powerful supercomputers, and super-high-speed magnetic levitation trains. Bozovic’s discoveries on cuprates— including a state of electronic order that competes with superconductivity, the dependence of the superconducting temperature on the density of electron pairs, the symmetry-breaking flow of electrons, and the strange linear relationship between electrical resistivity and magnetic field strength—have shed light on the origin and mechanism of high-temperature superconductivity in the cuprates.

“His pioneering work growing high-quality cuprate thin films has permitted careful, high-impact studies of cuprates that would never have otherwise happened,” said CMPMS Division Chair Robert Konik. “It made me very happy to learn of Ivan receiving this award.”

“Ivan Bozovic has been a world leader in the MBE approach to synthesize complex oxide materials,” said Brookhaven Associate Laboratory Director for Energy and Photon Sciences James Misewich. “His work is noted for remarkable discoveries, such as interface superconductivity and the giant proximity effect. These discoveries have only been possible because of Ivan’s pioneering development of exquisite control in materials synthesis. The McGroddy Prize for New Materials is a very well-deserved award for Ivan.”

Bozovic received his PhD in solid-state physics from University of Belgrade, Yugoslavia, where he began his career as a professor and head of the Physics Department. Prior to joining Brookhaven in 2003, Bozovic was a principal scientist and the chief technology officer for Oxxel GmbH and a senior scientist at Varian Research Center. Over his career, Bozovic has published more than 300 papers—30 of which have appeared in the Science and Nature family of high-impact journals—and delivered more than 250 invited talks. He is a member of the European Academy of Sciences, a foreign member of the Serbian Academy of Sciences and Arts, and the recipient of several awards, including the (inaugural) 2016 Award for a Lasting and Outstanding Contribution to Materials Science and Engineering from the Materials Research Society of Serbia, the 2012 Bernd T. Matthias Prize for Superconducting Materials, and the Society of Photo-Optical Instrumentation Engineers (SPIE) 2004 Technology Achievement Award.