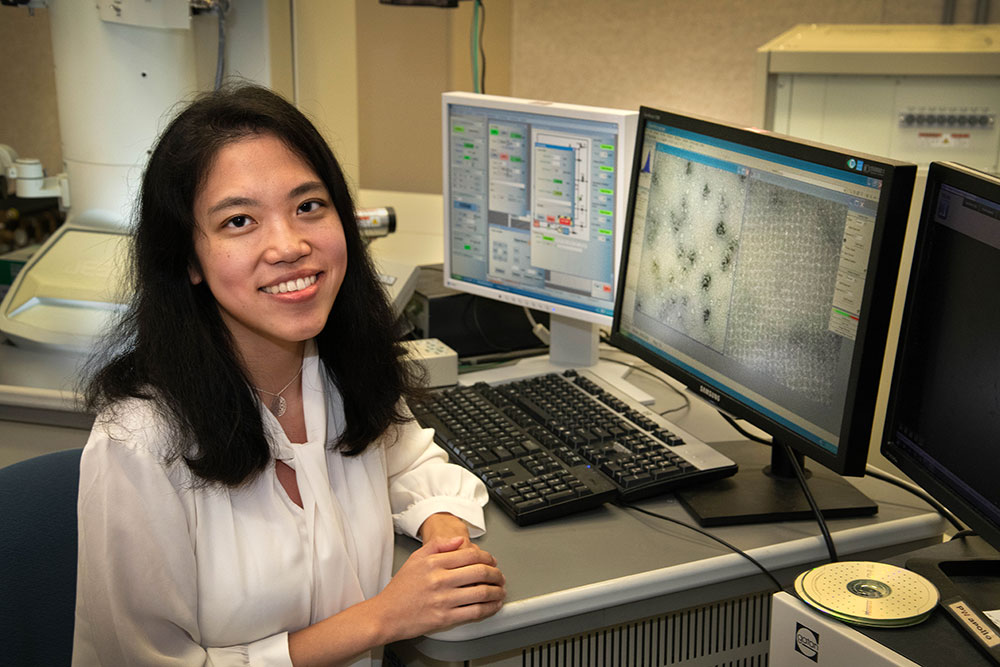 Postdoc Shih-Ting (Christine) Wang in the Electron Microscopy Facility of the Center for Functional Nanomaterials at Brookhaven Lab. On the screen in front of her are images of 3-D protein-encapsulated DNA origamis and 2-D protein arrays in DNA frameworks.

Thinking about what brought her into science, Shih-Ting (Christine) Wang attributes two primary factors: family and self-motivation. Her father, a medical doctor, would always talk about biology. With her uncle, a university professor in environmental engineering, she learned how to read scientific papers and participated in research projects in his group during high school.

At National Cheng Kung University, Wang chose to study materials science and engineering, obtaining both bachelor’s and master’s degrees in four years instead of the typical six. As an undergraduate, she was selected for a program that teaches engineering students about entrepreneurship and leadership. Through this program, Wang visited Purdue University and then toured research facilities at other U.S. universities and at the U.S. Department of Energy’s (DOE) Brookhaven National Laboratory. Little did she know that this visit to Brookhaven Lab wouldn’t be her last. 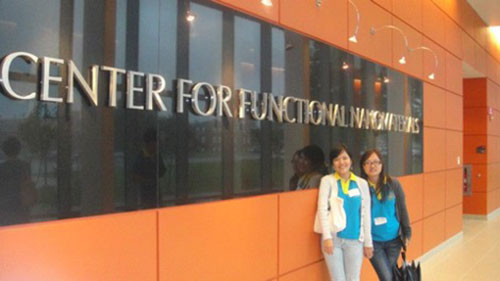 Wang (left) and one of the other participants in the entrepreneurship and leadership program at the Center for Functional Nanomaterials during their visit to Brookhaven Lab in 2012.

Because of this experience seeing U.S. research facilities and fond memories living in New Jersey to attend kindergarten while her father finished his medical internship at Columbia University, Wang dreamt of someday returning to the United States.

For her PhD, she applied for scholarships that would enable her to study in the United States or the United Kingdom. She was awarded the Top University Strategic Alliance scholarship for biotechnology research, sponsored by the Taiwan Ministry of Education, to complete her PhD at Imperial College London. Wang realized that she could apply her background in semiconducting and carbon-based materials to engineer biomaterials.

“Why not use materials on biology, I thought,” said Wang. “I could design materials that interface with biological systems.” 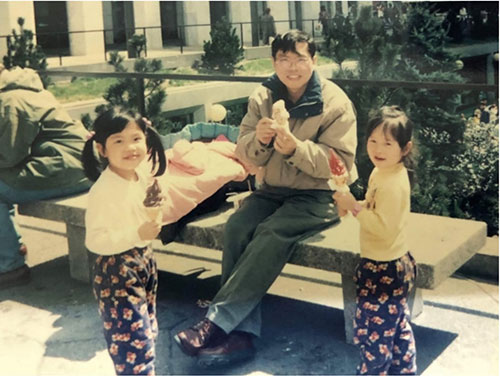 Wang (left) with her father and younger sister in the United States in 1997.

“I pitched my background in nanomaterials synthesis and characterization and interest in using this expertise to design and engineer materials for biomedical applications,” said Wang.

Once accepted into the group, Wang immersed herself in biology. While working with one of the postdocs in the group image samples related to type 1 diabetes research, Wang learned how to run bioassays, design and synthesize peptides, and characterize bionanomaterials. In the process, she became interested in making materials to better understand, detect, and treat diseases. She decided to focus her PhD research on type 2 diabetes, the most common type of diabetes. First, Wang developed a biosensor to detect levels of methylglyoxal, a precursor of glycated hemoglobin (A1C), or the percentage of sugar in the blood bound to the protein hemoglobin. Then, she studied the tendency of certain proteins to aggregate and form plaques in patients with diabetes. She also explored potential therapies using gold nanoparticles, which strongly bind to the proteins, to inhibit the protein-induced disruption of cell membranes.

A schematic showing the molecular binding of islet amyloid polypeptide (IAPP)—a peptide hormone secreted by the pancreatic islet, or the region of the pancreas that contains hormone-producing cells—to citrate-capped gold nanoparticles (Au NPs). In type 2 diabetes patients, IAPP can aggregate and form plaques that lead to defective insulin secretion. Wang found that the strong binding interaction accelerated IAPP assembly on the Au NP surfaces and ultimately reduced the level of peptide-induced lipid membrane disruption. Research published in Chemistry of Materials 29, 4 (2017).

In her final year of PhD study, Wang performed in situ electron microscopy as a visiting researcher at the Molecular Foundry (MF) at Lawrence Berkeley National Laboratory. Through these microscopy experiments, she visualized the growth of gold nanoparticles in real time and studied how the plaque-forming proteins modulated this growth. In 2017, she came to Brookhaven Lab, this time not as a visitor but instead as a postdoc in the Center for Functional Nanomaterials (CFN) Soft and Bio Nanomaterials Group, led by Oleg Gang, an expert in the bio-inspired self-assembly of nanoscale materials. The CFN and MF are both DOE Office of Science User Facilities and Nanoscale Science Research Centers, meaning scientists from all around the world can use them to conduct their research.

“The national lab and user facility environments were part of the reason I came to the CFN,” said Wang. “The staff scientists are experts in their fields, and they know not only the big picture of the research but also experimental details and how to operate instruments. You can go knock on their doors whenever and ask questions. At a worldwide user facility, you get to meet a lot of people from different disciplines, races, and cultures. I like that diversity. And of course, the facilities are perfect for doing research, and the CFN research program in bio-nanoassembly was the perfect fit.” 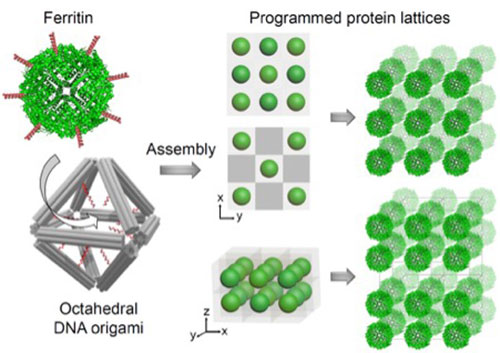 A rendering of the protein lattice concept. Wang encapsulated ferritin proteins inside 3-D DNA origami cages in programmed ways based on the complementarity of DNA and showed that the biological activity of these proteins was preserved in 3-D lattices. Research published in Nature Communications 12, 3702 (2021).

At the CFN, Wang has focused her research on several projects aimed at creating designed biomaterials using DNA-based assembly approaches. This research area is one of the well-recognized CFN efforts, but previously most of the activities focused on creating materials from inorganic (non-carbon-containing) nanoparticles. Wang, in collaboration with Gang, was interested in applying this approach to organize proteins into nanomaterials with a defined lattice structure and preserved biological function. Scientists desire to assemble proteins into rationally organized arrays to make a range of protein-containing materials.

“The capability to pack proteins in a 3-D space and maintain and orchestrate their functionalities is relevant to studies in structural biology and the development of tissue engineering scaffolds, multiple-enzyme systems, and assays for profiling proteins present in samples, to name a few examples,” explained Wang. “But the environment in which proteins are typically crystallized is very different from that of biological solutions. Because of this incompatibility, proteins can lose their conformational freedom, biological activity, or function.”

Wang and her research collaborators—which included scientists from the MF and  National Synchrotron Light Source II, another DOE Office of Science User Facility at Brookhaven—found that proteins can be assembled into 3-D lattices and remain active if they are placed inside the cage-like DNA “origami” structures, which assemble on their own according to interactions between complementary base pairs of the DNA. Scientists can program these structures by specifying the exact sequence of bases. Wang demonstrated this approach with ferritin, a protein that stores and releases iron ions and regulates iron metabolism.

“Going directly from materials science to biology is a big transition, said Wang. “However, using DNA as a building material to guide protein assembly is a way to bridge these two fields.” 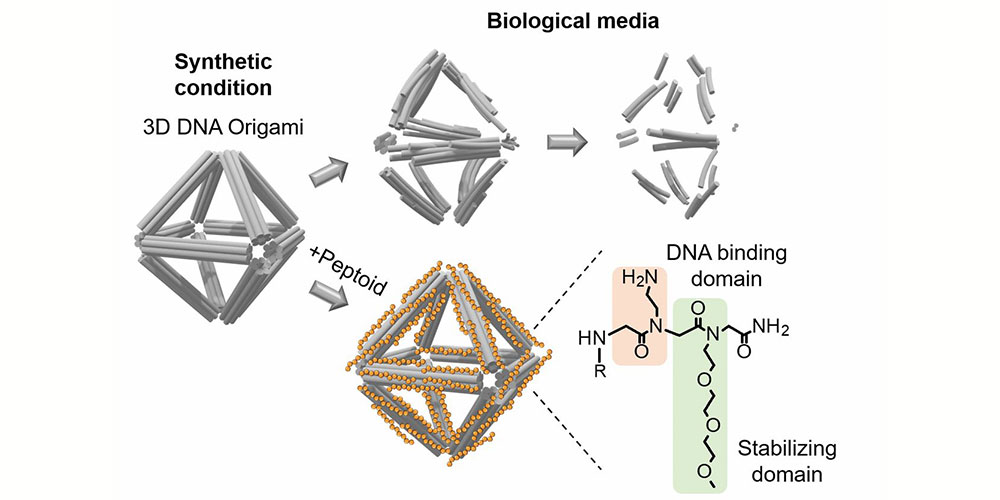 In another project, Wang designed chains of molecules (peptoids) with a precise sequence and length as a coating material to protect octahedral-shaped DNA origami in conditions relevant to biomedical applications. Inside the body, uncoated DNA origami would easily be digested by enzymes or degraded in response to changes in solution composition. The peptoid coating that Wang designed and then synthesized at the MF with the group of Ron Zuckermann enables the DNA origami to maintain its structure and function in these conditions. The peptoid coatings can potentially be used to protect not one origami but a 3-D lattice containing hundreds of origamis in a bioactive environment.

In 2019, Wang was awarded funding through Brookhaven’s Technology Maturation Program to further develop this technology at the Lab-to-Market Training Workshop. In addition, Brookhaven submitted a patent application for the peptoid design methodology. 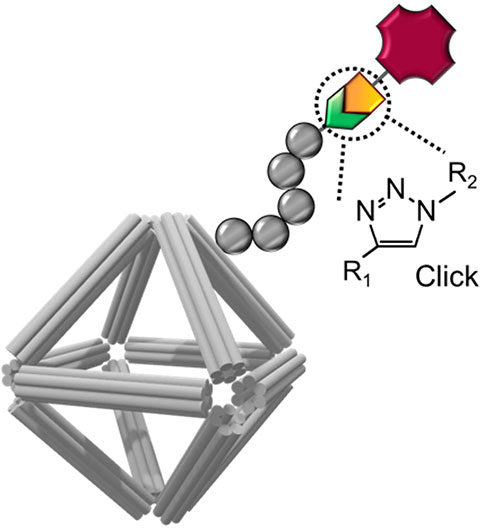 As shown in this illustration, the peptoids Wang designed as a coating for the octahedral-shaped DNA origami can be chemically conjugated with biomolecules (such as the anti-cancer drug trastuzumab) through click chemistry, which works similar to clicking a seatbelt buckle. Research published in Proceedings of the National Academy of Sciences 117, 12 (2020).

In collaboration with the Bertozzi Group at Stanford University, Wang explored how the peptoid coating can be chemically conjugated with antibodies and displayed on the origami surface. Ultimately, Wang’s goal is to enable combinatorial targeted therapy—a peptoid-coated DNA origami featuring trastuzumab (an antibody drug that targets HER2-positive breast cancer, in which the HER2 receptors on breast cells are overexpressed) on the surface and loaded with the chemotherapy drug doxorubicin. Currently, Wang and her collaborators are determining whether DNA origami presenting specific numbers and orientations of trastuzumab can enhance the targeted delivery of the drug to cancer cells.

Wang also found that these same peptoids designed for DNA protection can be used to coat gold nanoparticles to impart them with different properties. The peptoids are soluble in both water and organic solvents, while the gold nanoparticles are commonly made in the water phase.

“With the coating, the nanoparticles can be transferred to and used in a different phase,” explained Wang. “For example, we may be able to do catalysis or other chemical reactions with them in the organic phase.”

In the fall, Wang will complete a second postdoc in the group of Sangeeta Bhatia at MIT, where she will apply nanotechnology to biomedical applications. Ultimately, her goal is to become a faculty member at a university, performing independent research, as well as collaborating with and mentoring others. 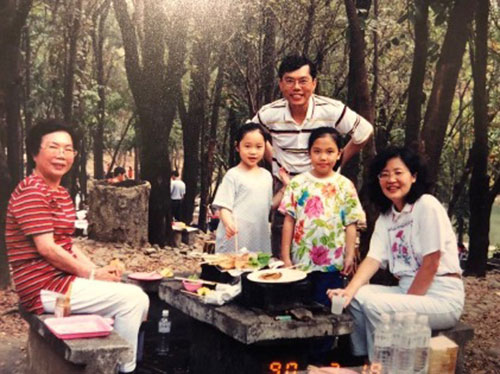 “The combination of my postdocs in nanotechnology at the CFN and biomedicine at MIT will prepare me to address the most challenging problems in healthcare,” said Wang.

Though Wang had decided as early in high school that she would follow in her father’s footsteps to be a medical doctor, her career path did not lead her in the same direction. However, the biology that Wang’s father spoke so passionately about and his career in medicine were never lost on her. With her materials research, Wang is particularly interested in solving one problem: cancer. This interest is both professional and personal.

“My father, my biggest role model, died from cancer three years ago,” said Wang. “For my future research, my goal is to decide which type of cancer to focus on, as I can’t tackle them all. I must figure out which biological and biomedical questions I want to solve. To profile, interrogate, and treat specific cancer types, I need to think about what kinds of materials to design. I’m very excited to be in this field, not only because I’m carrying on my father’s legacy but also because I’ll be contributing to potential solutions to a disease affecting people worldwide.”