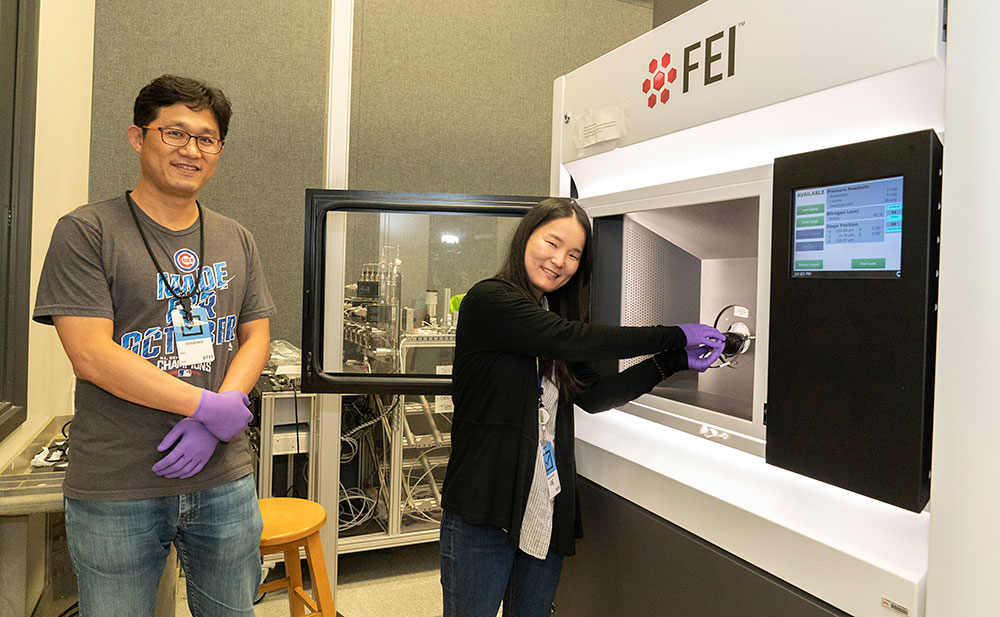 Gihan Kwon (left) and Sooyeon Hwang with the FEI Talos F200X high-resolution scanning and transmission electron microscope in the Electron Microscopy Facility at the Center for Functional Nanomaterials (CFN) at Brookhaven Lab. The team used this microscope to study structural changes occurring in conversion-type metal-oxide electrodes for lithium-ion batteries during the insertion and removal of lithium ions. They discovered an intermediate phase of lithium metal oxides appearing after battery charging. This phase accumulates over time, reducing the amount of lithium ions available to participate in subsequent charge-discharge cycles and ultimately causing a drop in battery capacity.

Because of their high storage capacity, metal oxides are a promising class of potential conversion-type electrode materials for next-generation lithium-ion batteries. Conversion-type electrode materials undergo conversion reactions; when they react with lithium ions, they get converted into entirely new products. Today’s commercial batteries are based on a completely different mechanism called intercalation.

“In intercalation, lithium is reversibly inserted into and extracted from electrode materials without damaging their crystal structure,” explained Sooyeon Hwang, a staff scientist in the Electron Microscopy Group of the Center for Functional Nanomaterials (CFN) at the U.S. Department of Energy’s (DOE) Brookhaven National Laboratory. “While these materials are highly stable, only a limited number of lithium ions can participate. As a result, their capacity is relatively lower than conversion-type materials.”

“Many more lithium ions can participate in conversion reactions with metal-oxide electrode materials, enabling a higher battery capacity,” added Ji Hoon Lee, an expert in electrochemistry and x-ray absorption spectroscopy who formerly conducted research in the Chemistry Division at Brookhaven Lab during his time as a postdoc at Columbia University and is now an assistant professor at Kyungpook National University in Korea. “However, the crystal structure of these materials completely changes from its original state, causing instabilities like a fade in capacity over multiple charge-discharge cycles.” 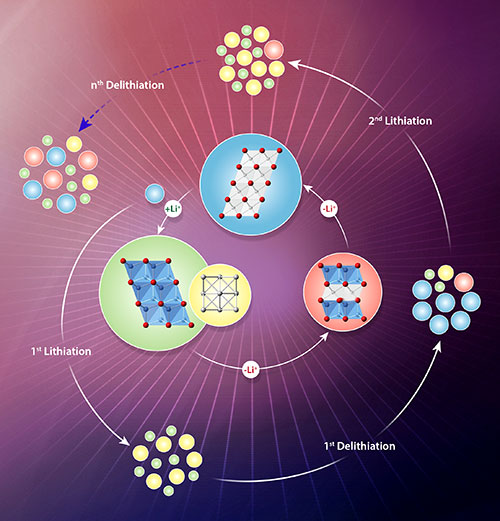 An Illustration of the structural changes occurring at a metal-oxide electrode during battery cycling. The inner circle shows structural changes during lithium extraction and lithium insertion. The outer circle shows how the material degrades by incomplete lithium-extraction reactions over several charge-discharge cycles. This image was featured on the cover of Chemistry of Materials 33, 10 (2021).

Hwang and colleagues from the CFN and collaborating institutions have been studying conversion-type electrode materials for several years. Previously, they studied iron-oxide electrodes at high current and found that “kinetic barriers” during long-term cycling caused capacity fade. At high current, the battery charges and discharges relatively fast, as is the case for real batteries.

“If this cycling occurs too fast, a lithium gradient can arise across the electrode material,” explained Hwang. “For example, one location may have more lithium inserted or extracted than another location.”

Now, the team—co-led by Hwang and Lee and including scientists from the CFN, Chemistry Division, and National Synchrotron Light Source II (NSLS-II) at Brookhaven Lab—removed these kinetic barriers by operating the batteries at more mild conditions of low current and constant voltage after charge and discharge. Though a gap exists between these experimental conditions and real-world conditions, an understanding of how electrode materials behave on a fundamental level can inform new designs for better-performing batteries.

In this case, they tested one of two nontoxic and widely available metal oxides—nickel oxide or iron oxide—in lithium-ion half-cell batteries.

“Our goal in this initial study was to perform simple electrochemical tests to understand the fundamental mechanism of lithium insertion and extraction,” said Hwang. “Future studies will require full-cell batteries involving both electrodes.

The electrochemical tests revealed significant differences in battery voltage profiles and capacity over 10 cycles. To characterize changes in the cycled electrode materials, the team performed experiments at three NSLS-II beamlines—Quick X-ray Absorption and Scattering (QAS), Pair Distribution Function (PDF), and X-ray Powder Diffraction (XPD)—and at the CFN. The QAS beamline provided chemical information, including oxidation states, on each metal at different states of charge and discharge. The PDF and XPD beamlines are well-suited for determining crystal structure, with PDF being particularly sensitive to how atomic bonds are locally configured.

From these x-ray synchrotron studies, the team observed that the reduction and oxidation (redox) reactions of nickel in nickel oxide and iron in iron oxide were not very reversible. However, they didn’t know the reason for the incomplete reconversion reactions and capacity fade. Using transmission electron microscopes (TEMs) in the CFN Electron Microscopy Facility, they obtained high-resolution images. These images showed intermediate phases of lithium metal oxides appearing after charging. By contrast, during discharge, the metal oxides directly convert into lithium oxide and pure metal.

“The presence of the intermediate phase means lithium is not fully extracted during charging,” explained Hwang. “This phase sticks around and accumulates over time. So, the amount of available lithium ions for subsequent cycles decreases, causing the capacity to keep dropping cycle after cycle. Previously, we showed that kinetic barriers were responsible for capacity fade, but here we demonstrate that intrinsic restrictions can also cause a drop in capacity.”

Given these results, the team believes charging and discharging occur through different (“asymmetric”) reaction pathways. Energy is required to extract lithium ions during charging, so this reaction follows a pathway based on energy transfer, or thermodynamics. On the other hand, the insertion of lithium ions during discharging happens spontaneously, and this fast lithium diffusion follows an alternative pathway driven by kinetics.

Next, the team plans to characterize other conversion-type electrode materials such as metal sulfides and perform studies during battery cycling; such in-situ characterization is one of the areas CFN specializes in.

“Brookhaven is very conducive to forming collaborations and friendships with early-career researchers,” said Hwang. “The discussions with them were very helpful in this work, which represents the first time I led a project independently.”

In June, at a Microscopy Society of America regional meeting, Hwang presented her latest battery research, including her studies on cathode materials with solid electrolytes (medium through which lithium ions flow), which may be a safer alternative to the liquid electrolytes in today’s batteries. In the future, she hopes to secure more invited talks not only to share her research but also to introduce scientists to the CFN and its user program.