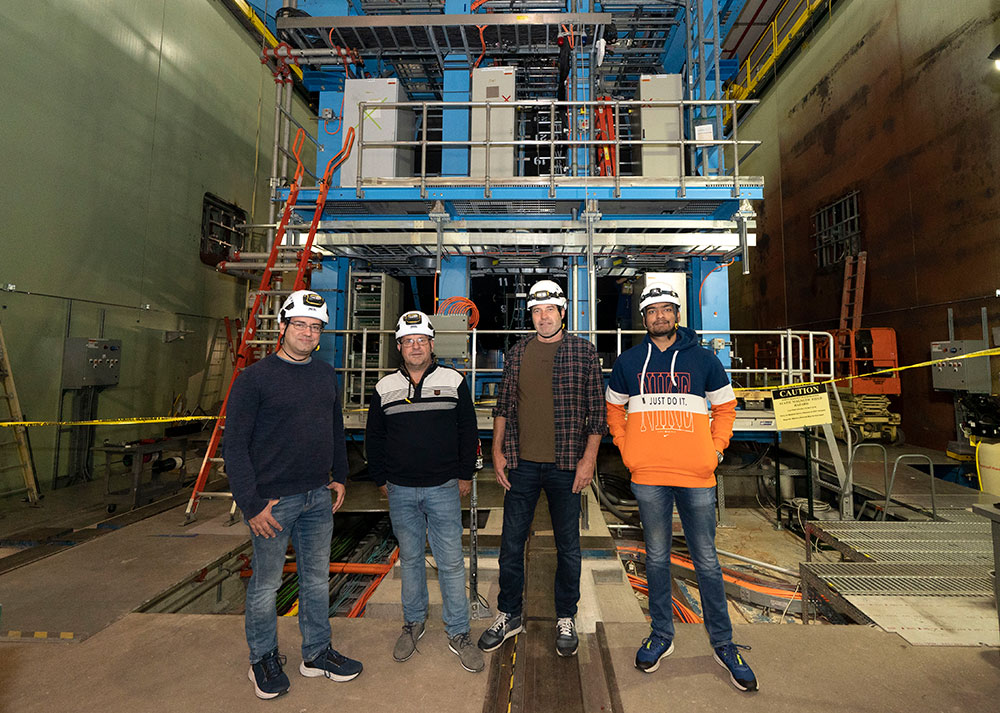 Physicists, engineers, and technicians at the U.S. Department of Energy’s (DOE) Brookhaven National Laboratory are rounding out the year with key developments to a house-sized particle detector that will begin capturing collision snapshots for the first time next spring.

The state-of-the-art, three-story, 1,000-ton detector—known as sPHENIX—will precisely track particles streaming from collisions at the Relativistic Heavy Ion Collider (RHIC), a DOE Office of Science user facility for nuclear physics research. It’s an ongoing makeover of the PHENIX experiment, which took data at RHIC from 2000 until 2016. The upgraded, state-of-the-art sPHENIX will enable scientists to better understand the properties of quark-gluon plasma (QGP) —a soup of subatomic particles that are the inner building blocks of protons and neutrons. Scientists want to measure those particles to learn more about how those building blocks interact to form the visible matter that makes up our world.

With the recent completion of essential particle-tracking components and a project to map the magnetic field of a superconducting electromagnet at the detector’s core, sPHENIX crews are gearing up for final installations.

“There’s this whole choreography of a very intricate process of how these remaining pieces go together that’s going to play out in the next months and have us in shape to take data in the spring,” said Brookhaven Lab nuclear physicist and sPHENIX co-spokesperson David Morrison.

A central component of sPHENIX is a 20-ton cylindrical superconducting solenoid magnet. It was once the centerpiece of an experiment called BaBar at SLAC National Accelerator Laboratory in California. Crews transported it across the country in 2015, tested it at low-field in 2016 and high-field in 2018, and carefully installed it at sPHENIX last year.

The magnet generates a precise and uniform magnetic field—1.4 Tesla, or about as strong as the magnet used for magnetic resonance imaging (MRI) scans. The powerful field will bend the trajectories of charged particles that are among the “debris” produced when nuclei collide at RHIC.

Remaining detectors soon to be layered inside the magnet’s drum will measure very accurately the position of the particles that stream out of these nuclear smashups, from which other properties can be obtained. Scientists seek to “connect the dots” of those measurements to discern very small differences among three kinds of “parent” particles called upsilons. The upsilon data is only one of numerous studies with sPHENIX at RHIC which will reveal clues about how QGP transitions from a hot soup of quarks and gluons to matter as we know it.

But before these final tracking components can be installed, the sPHENIX crew sought to map the solenoid’s magnetic field.

“Once you fill up the middle of the magnet, you can’t place a mapping machine inside,” said Brookhaven physicist Kin Yip.

A team from CERN, Europe’s particle physics laboratory, came to Brookhaven in November to tackle the precision task.

The CERN team used the same mapping machine they’d previously used to map the magnet that forms the backbone of the ATLAS experiment at CERN’s Large Hadron Collider.

The mapping machine, shipped from Geneva, Switzerland, fit into precision rails inside of the magnet’s drum, where some panels of the sPHENIX electromagnetic calorimeter (EMCal)—which will measure different types of charged and uncharged particles in RHIC collisions—had not yet been installed. The cryogenic group from Brookhaven’s Collider-Accelerator Department used liquid helium to cool the solenoid’s superconducting cables to 4.6 degrees Kelvin (-451.4 degrees Fahrenheit)—the temperature needed to generate the magnetic field. Two arms run by air-powered motors rotated like propellers to measure the magnetic field as crews stepped the machine along points from one end of the cylindrical magnet to the other. (Technicians installed the final EMCal segments soon after the mapping project ended.)

"We thank Brookhaven Lab and in particular the people at sPHENIX for tasking us with the mapping of the sPHENIX solenoid,” said Nicola Pacifico of CERN’s mapping group, which included Francois Garnier, Raphael Dumps, Pritindra Bhowmick. “Every mapping campaign is an R&D exercise on its own, presenting its specific challenges. We enjoyed the support of a very competent team on site, which allowed us to complete the mapping in a timely manner. We wish sPHENIX and its team full success in its physics programme, and au revoir until the next mapping at Brookhaven Lab!"

sPHENIX scientists had been using a calculated map of the solenoid’s magnetic field to run RHIC collision simulations. The new precision measurements will increase the accuracy of deciphering data from the complex experiment once it’s up and running.

“In general, in experimental physics, more information is better than less information,” said John Haggerty, a Brookhaven physicist who led the acquisition of the magnet in the early days of sPHENIX. “We can only calculate what we think we built, not what we may have inadvertently built. Now, we have the best possible map.” 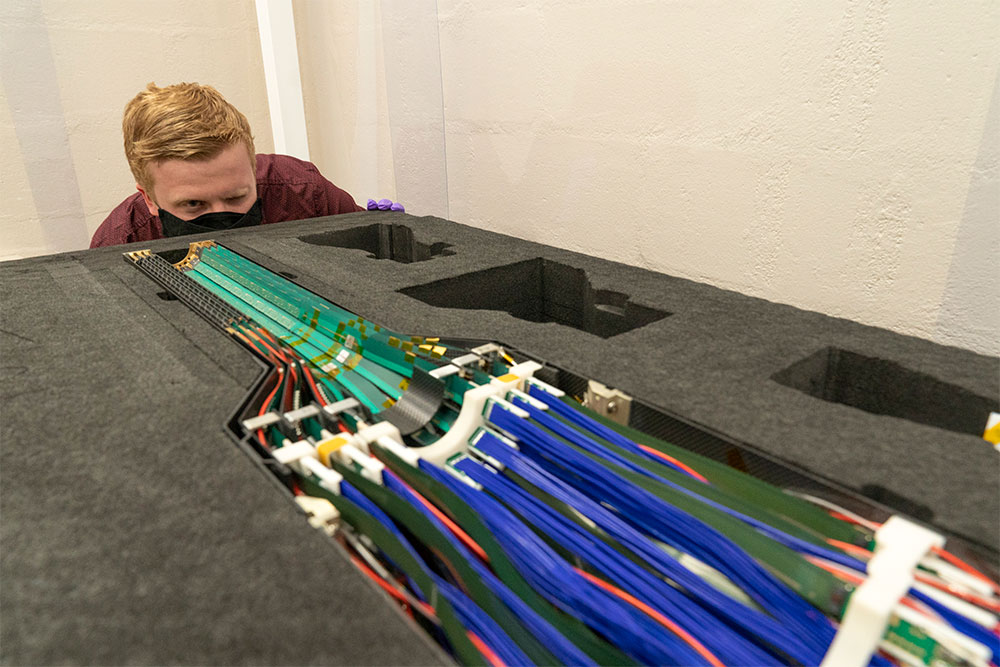 Cameron Dean, a postdoc at the Massachusetts Institute of Technology, with the complex MVTX detector, which experts from DOE's Lawrence Berkeley National Laboratory assembled and shipped to Brookhaven Lab. "I've worked on the MVTX project for almost 4 years now and it has been amazing to see it progress from individual pixels chips to a fully-fledged detector," Dean said. "I can't wait to turn it on inside sPHENIX in a few months to see it record the very first collisions in a brand new experiment."

The massive magnet isn’t the only major detector component that made a cross-country trek to sPHENIX. Pieces of a pixel-based vertex detector known as MVTX, were built at CERN, then shipped to DOE’s Lawrence Berkeley National Laboratory (LBNL) in California for expert assembly, before arriving safely at Brookhaven in October. The detector was shipped in two halves for the 3,000-mile cross-country road trip. Crews used a truck with special suspension and took care to consider a safe route and weather conditions.

The MVTX is one of three components that will work together to measure the position to determine the momentum of all charged particles emerging from RHIC’s collisions. (The other two are an Intermediate Silicon Strip Tracker (INTT, see below) and a Time Projection Chamber (TPC) being built at Stony Brook University.

The MVTX, which will sit within the sPHENIX magnet’s central core, offers a very precise answer to the question: did a particle come exactly from the collision or even a fraction of a hair’s width away? It turns out that differences of such tiny distances can make a big difference.

“Thousands of particles come out of our collisions,” Morrison explained. “Some of those particles decay, turning into other types of particles almost right away—making it maybe 50 microns, about the thickness of a strand of hair. MVTX tells us extremely precisely where particles came from, with a precision of about five microns, so we know if the particle was created in the collision itself or is a product of such as decay.”

The part of MVTX that actually makes measurements is compact—about a foot long, 3.5 inches in diameter, and weighing in at about 3 ounces. All together, MVTX is made up of three overlapping layers of silicon sensors, which line two halves of a carbon fiber tube. At one end, the tube widens like the bell of a trumpet to fit lots of cables and fibers that power and readout the detector.

“In this compact package there are 300 million channels, elements that can say ‘I saw something,’” said Edward O’Brien, the sPHENIX project director. “If we think of those channels as pixels, MVTX has a factor of 40 more pixels than your high-definition TV crammed into a space that’s over 20 times smaller.”

Before installing the pixel-based detector early next year, sPHENIX engineers and technicians will practice placing a mockup of this delicate component around the experiment’s beam pipe., They’ll have only a tiny amount of clearance—about a millimeter—to slide the device into its final position after the other detector components are installed. “It’s like playing the game ‘Operation’ in reverse,” Morrison said. When it comes time to put that final piece in place, he says, the sPHENIX crew will be ready. 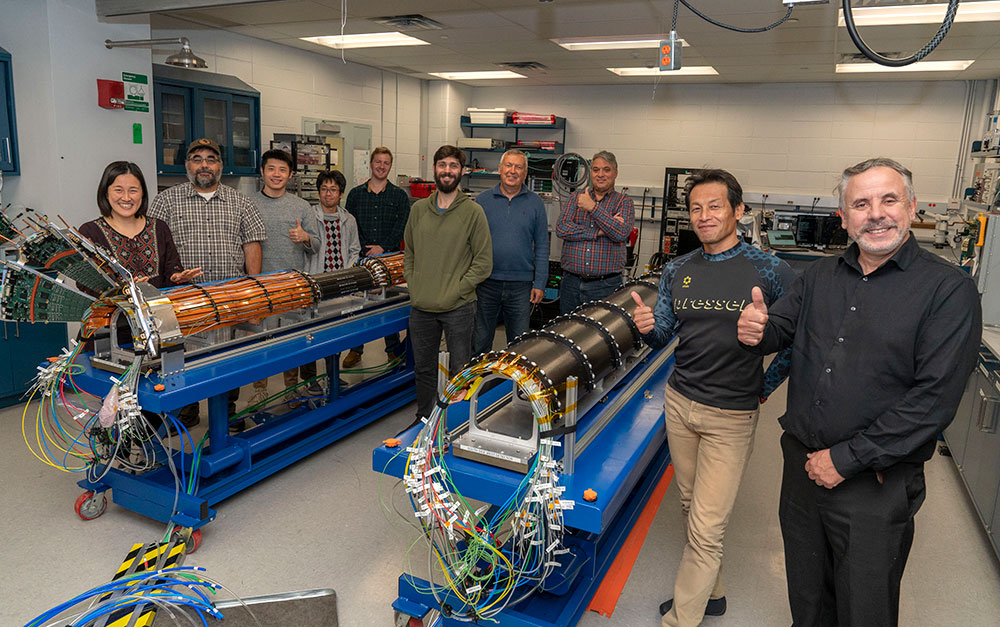 Meanwhile the team is making progress on those other particle-tracking components.

With a response time of 60 nanoseconds—60 billionths of second—the INTT will be key in capturing continuous snapshots of 15,000 particle collisions per second, more than three times faster than the former PHENIX detector.

The INTT takes measurements in the space where MVTX and TPC do not, allowing physicists to reconstruct a complete particle track. It’s super-fast response time enables it to distinguish which tracks come from overlapping events when collisions are piling up.

The sub-detector was completed in mid-September by an international collaboration that included technicians, engineers, postdocs, and scientists from Japan, Taiwan, and the U.S. The project is funded primarily through the RIKEN BNL Research Center (RBRC) with additional U.S and international contributions.

The INTT consists of four layers of overlapping silicon strips that form a semiconductor particle detector based on ionizing radiation detection. The layers sit in two halves of a 10-foot-long cylinder. Bringing the two-halves of the detector together for testing, and soon installation, was a tricky task with many moving parts.

To ensure a “safe landing” the INTT assembly team used a machine with two “claws” that picked up each half and pressed them together while technicians tightened screws and knobs around the device. They had to be careful to prevent any cracks in the silicon strips. They also needed to ensure there are no gaps between overlapping silicon layers so the detector can receive all particle signals when its operational.

“Physics is always moving towards precision and detector technology has to keep up with it—we want detectors to be faster, more precise,” Nouicer said. “It’s a great accomplishment to see all the INTT detector’s channels working. Now, we want to do physics with it.”

As work progresses on the TPC, a gas tracking detector, at Stony Brook, the time for physics is fast approaching. Stay tuned for another update on that detector component.

“We’re right at the end of detector component construction. O’Brien said. “We’re done within errors. The challenge ahead is completing installation in the next few months”

“As you can see, the construction and assembly of these complex detector components is a major international effort,” said sPHENIX co-spokesperson Gunther Roland, a physicist at the Massachusetts Institute of Technology. “This work brings together so many great physicists from all over the world—80 universities and labs from 14 countries and close to 400 collaborators —to make the vision for this detector and the science it will enable a reality.”

The upgrade and operations at RHIC are funded by the DOE Office of Science (NP).