Scientists reveal the source of charge density waves in superconductors 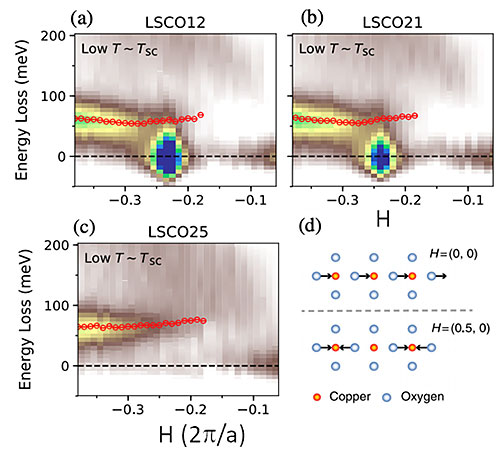 Scientists showed that charge density waves form from electronic effects, not lattice effects, in cuprates, a special class of superconductors.

Understanding the origin of charge density waves is a central piece of the puzzle of high-temperature superconductivity, since the two have been shown to be closely interconnected. Superconductors are materials that can conduct electricity with almost zero resistance and, if realized at room temperature, have many applications.

Superconductors are a class of materials that can conduct electricity with almost zero resistance and hold the promise to revolutionize modern life as we know it; however, they must be chilled to nearly absolute zero, the coldest temperature possible.  Researchers are searching for materials that superconduct at higher temperature— a class of materials called high-temperature superconductors— and are zeroing in on one particular group of materials, called cuprates, that show promise for operating at higher temperatures. Scientists have studied these materials for over 30 years but cannot fully explain how they work—a necessary step towards engineering the “holy grail” of cuprates—a versatile, robust material that can superconduct at room temperature and ambient pressure.

In this work, a team of researchers discovered some new information about the electronic behavior of a particular cuprate using an x-ray technique that has not been widely used to study them. They investigated the cuprate at the Soft Inelastic X-Ray (SIX) beamline at the National Synchrotron Light Source II (NSLS-II), a U.S. Department of Energy (DOE) Office of Science User Facility located at DOE’s Brookhaven National Laboratory. The team measured a specific arrangement of electric charge that arises in cuprates—an ordered pattern of electrons known as a charge-density wave (CDW). The SIX beamline offers ultrahigh energy resolution for investigating excitations of both valence electrons and phonons—the collective vibrations of the atomic lattice. The team looked for a dependence of the measured spectra to the doping level with the various samples of the materials but found that the spectra are not related to excitations.

After careful analysis of the data, the team concluded that CDWs are driven by “strong correlations”—a term used to describe not-well-defined electronic behaviors in materials—between electrons, adding support to the idea that the response to the measurement in the cuprates is driven by how the CDW modifies the crystal lattice and how those modifications invoke more complex interactions.

This work offers a new piece in the puzzle that is the physics of the cuprate superconductors.

Feature Story:  “A New Approach for Studying Electric Charge Arrangements in a Superconductor”