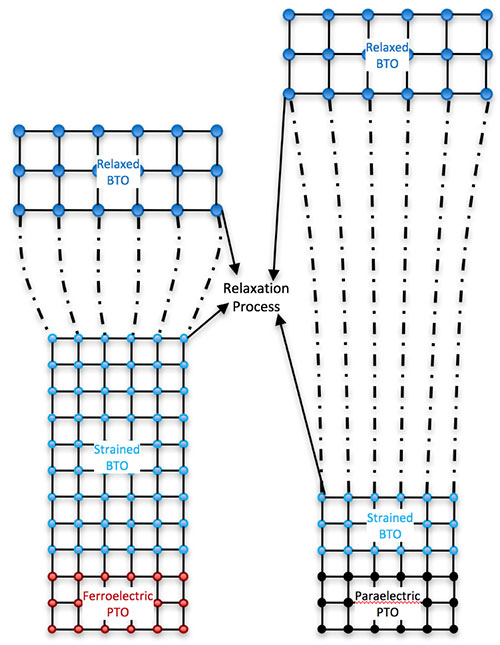 The schematic depicts the modified relaxation of strain in BaTiO3 when the underlying PbTiO3 layer is ferroelectric (delayed and abrupt) vs. paraelectric (rapid onset, but gradual). Image credit: Matthew Dawber

Scientists used polarization to engineer the properties of ferroelectric thin films during growth.

Ferroelectric thin films have applications in ferroelectric memory that is based on capacitors or ferroelectric field effect transistors; this work offers a complementary pathway to engineer these films.

Ferroelectric materials have various applications in energy storage and sensor technology.  Researchers are working on ways to engineer these materials to reach desired properties; however, until now, the engineering process during the growth of these materials had been predominantly through strain engineering.

In this work, scientists demonstrated the ability to engineer material properties of ferroelectric thin films during growth through polarization. The polarization of the thin film is linked to its crystal structure, and the researchers showed that it can also play an important role in the growth process, influencing growth rates, relaxation mechanisms, electrical properties, and domain structures.

The team studied the properties of the ferroelectric material BaTiO3 during the growth of thin films by using complementary techniques including x-ray diffraction, piezoforce microscopy, and electrical characterization. Among these techniques, the team used in situ x-ray diffraction at the Integrated In situ and Resonant Hard X-ray Studies (ISR) beamline at the National Synchrotron Light Source II (NSLS-II), a U.S. Department of Energy (DOE) Office of Science User Facility located at DOE’s Brookhaven National Laboratory, to measure how the material grew.

Based on their research, the team showed that the changes in growth were driven by the energy cost for the top layers to sustain the polarization imposed by underlying layers.

They also expect that these effects may occur in other multilayer systems where polarization is present during growth. Therefore, they conclude that the concept of polarization engineering could be a complementary approach to strain engineering.