UPTON, NY—From advances in accelerators and experiments exploring the building blocks of matter and making medical isotopes to new revelations about superconductors, nanomaterials, and biofuels, 2016 was a year of accomplishment at the U.S. Department of Energy's Brookhaven National Laboratory. Here are our Top-10 highlights.

Scientists Model the "Flicker" of Gluons in Subatomic Smashups 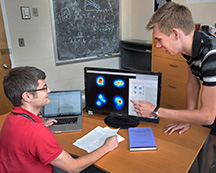 enlarge
Scientists exploring the dynamic behavior of particles emerging from subatomic smashups at the Relativistic Heavy Ion Collider (RHIC), a particle collider used for nuclear physics experiments at Brookhaven Lab, are increasingly interested in the role of gluons. These glue-like particles ordinarily bind quarks within protons and neutrons, and appear to play an outsized role in establishing key particle properties. A model developed in 2016 by nuclear theorists at Brookhaven reveals that a high degree of gluon fluctuation—a kind of flickering rearrangement in the distribution of gluon density within individual protons—could help explain some of the remarkable results at RHIC and also in nuclear physics experiments at the Large Hadron Collider (LHC) in Europe. The model describes how the structure of a seemingly simple proton can fluctuate as gluons continuously split and recombine, essentially flickering in and out of existence like the light of fireflies blinking on and off in the nighttime sky. Understanding this behavior is essential to interpreting what happens when protons strike larger particles such as gold or lead ions in particle collisions at RHIC and the LHC. 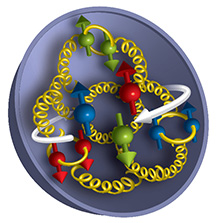 enlarge
Accelerator physicists at Brookhaven National Laboratory have successfully implemented an innovative scheme for increasing proton collision rates at the Relativistic Heavy Ion Collider (RHIC), giving scientists more data to sift through to answer important nuclear physics questions, including the search for the source of proton spin.  RHIC is the world's only polarized proton collider, capable of sending beams of protons around its 2.4-mile-circumference racetrack with their internal magnetic axes (also known as spins) aligned in a chosen direction. Colliding beams of such "spin polarized" protons and manipulating the spin directions gives scientists a way to explore how their internal building blocks, quarks and gluons, contribute to this intrinsic particle property. But getting protons to collide is an ongoing challenge because, as one beam of these positively charged particles passes through the other, the particles' like charges make them want to move away from one another. Brookhaven accelerator physicists use a beam of oppositely charged particles, electrons, to compensate for the head-on beam-beam effects. As the protons pass through the negatively charged electron beam, they experience a kick in the opposite direction from the repulsive force created by their like-sign positive charges. The kick from this "electron lensing" nudges the protons back toward the center of the beam, so far doubling the peak and average "luminosity" (measures related to collision rates) at RHIC.

Lab Boosts Production of Radioisotopes for Diagnostics and Therapeutics 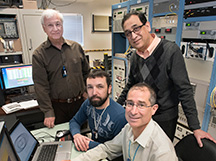 enlarge
Upgrades to the Brookhaven Linac Isotope Producer (BLIP), the Lab's radioisotope production and research facility, have increased the yield of key medical isotopes used to diagnose and treat diseases. Many of these isotopes can only be produced by nuclear reactions that rely on high-energy particle accelerators like those that feed particle beams to fundamental nuclear physics experiments at the Relativistic Heavy Ion Collider (RHIC), part of Brookhaven's flagship collider-accelerator complex. The upgrades at BLIP increased the intensity of the particle beams used to trigger isotope-producing reactions in target materials, and also introduced a novel system for scanning the beam across the targets to maximize their use. Since early 2016, these improvements have contributed to increased production of strontium-82 (Sr-82), an isotope used for cardiac imaging, and to research and development on actinium-225 (Ac-225), an isotope that may be a promising treatment for many forms of cancer, including leukemia and melanoma. 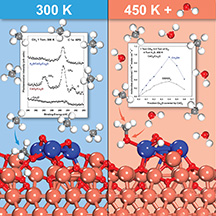 enlarge
Brookhaven scientists have developed a catalyst for converting methane, the main component of abundant natural gas, directly to methanol at fairly low temperatures. Refining this catalyst could lead to a major commercial breakthrough—an inexpensive way to convert methane into methanol and other fuels or feedstocks for the synthesis of commodity goods such as plastics, paints, and textiles. The catalyst is made of inexpensive cerium dioxide (ceria) particles on a copper-oxide surface, which react with methane to free reactive hydrocarbon intermediates. Water provides hydroxide (OH) groups to react with the intermediates, producing methanol at high yield and low temperature. This reaction beats current two-step processes, where the first step is energy-intensive and expensive, as well as other attempts at one-step reactions where higher temperatures convert most of the useful hydrocarbon building blocks into carbon monoxide and carbon dioxide rather than methanol.

DNA Shaping Up to be Ideal Framework for Rationally Designed Nanostructures 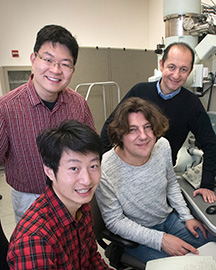 enlarge
In a series of papers, Brookhaven scientists working at the Lab's Center for Functional Nanomaterials (CFN) used DNA as a programmable nanoscale building material, driving particles measuring just billionths of a meter to self-assemble into a wide variety of three-dimensional lattice structures. The scaffold-like frames made of DNA can even form interconnecting modules, or hold nanoparticles inside with DNA arms as programmable cages. The scientists verified the frame structures and nanoparticle arrangements using cryo-electron microscopy (a type of microscopy conducted at very low temperatures) at the CFN and Brookhaven's Biology Department, and x-ray scattering at the National Synchrotron Light Source II (NSLS-II). In each case, the external and internal binding properties and shapes of the precisely designed DNA frames control the structure of the resulting assemblies. This gives the scientists a way to engineer different lattices and architectures without having to manipulate the individual particles. The method opens up opportunities for rationally designing nanomaterials with optical, electric, and/or magnetic properties that can be enhanced or optimized by precisely organizing functional components. Some examples include targeted light-absorbing materials that harness solar energy, or magnetic materials that increase information-storage capacity. 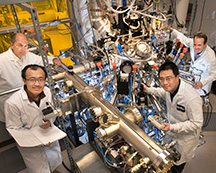 enlarge
A team of Brookhaven physicists has discovered a possible reason why certain copper-oxide (cuprate) materials can conduct electricity without resistance at temperatures well above those required by conventional superconductors. After growing and analyzing thousands of precisely engineered samples of a cuprate known as LSCO (containing lanthanum, strontium, copper, and oxygen), they determined that LSCO's "critical" superconducting temperature is controlled by the density of electron pairs—the number of electron pairs per unit area—instead of the strength of the electron pairing interaction, challenging a standard theory. If the team is correct, then it seems that small, local pairs of electrons essentially form a "superfluid" that flows without resistance. Previous experiments have established that the size of electron pairs is much smaller in cuprates than in conventional superconductors, whose pairs are so large that they overlap. Understanding what interaction makes the electron pairs so small in cuprates is the next step in the quest to solve the mystery of high-temperature superconductivity. Cracking this mystery may pave the way for engineering materials that become superconducting at room temperature—a capability that could transform the way energy is produced, transmitted, and used.

enlarge
Brookhaven scientists discovered another clue to understanding the electronic ordering in copper-oxide superconductors. Using x-rays at Brookhaven's National Synchrotron Light Source II (NSLS-II), they found evidence that static "charge stripes" (fixed arrangements of charges) coexist with the material's ability to conduct electricity without resistance. Previously, the exact nature of these stripes—specifically, whether they fluctuate over time and whether they work together with or against the electrons that pair up and flow without energy loss—has remained a mystery. The new evidence for the coexistence of superconductivity with static (as opposed to fluctuating) charge stripes suggests that this static ordering of electrical charges may cooperate rather than compete with superconductivity. If this is the case, then the electrons that periodically bunch together to form the static charge stripes may be separated in space from the free-moving electron pairs required for superconductivity. Understanding the detailed physics of how these compounds work should point the way toward a recipe for how to raise the superconducting temperature. 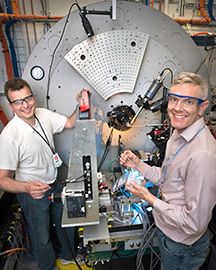 enlarge
Computational tools play a role in every area of science at Brookhaven. Two standouts of 2016 include sorting out structures at the nanoscale and a new, efficient way to sift through petabytes of data generated at the Large Hadron Collider (LHC). In the first example, scientists used advanced data analytics to make sense of "fuzzy" data generated by x-rays scattering off clusters of gold nanoparticles. The analysis revealed two unique atomic arrangements of the gold particles—somewhat like the differing arrangements of carbon atoms that result in diamond and graphite. The discovery gives engineers a new material to explore, along with the possibility of finding other "polymorphic" nanomaterials with potentially divergent functions. The second example was a demonstration of a "workload management system" that breaks up complex data analysis jobs and simulations for the LHC's ATLAS and ALICE experiments and "feeds" them into untapped pockets of available supercomputing time—similar to the way tiny pebbles can fill empty spaces between larger rocks in a jar. Mobilizing these previously unusable supercomputing capabilities, valued at millions of dollars per year, could quickly and effectively enable cutting-edge science in many data-intensive fields.

Study Shows Trees with Altered Lignin are Better for Biofuels 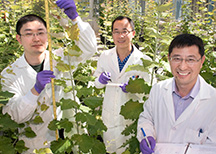 enlarge
Scientists at Brookhaven have made a major advance that could lead to increased production of biofuels and other sustainable plant-based products. They engineered a novel enzyme involved in the synthesis of lignin—a natural component of the cellular scaffolding that enables plants to grow to great heights but simultaneously makes them hard to break down. Lignin forms a barrier of sorts around other plant cell-wall polymers, making it difficult for digestive enzymes to release their carbon-rich building blocks—the simple sugars needed to create biofuels like ethanol. Past approaches to limit lignin have weakened plants, reduced biomass, or both. The new enzyme changes lignin in a way that increases access to the biofuel building blocks without inhibiting plant growth. The engineered enzyme resulted in healthy aspen trees whose woody biomass released 62 percent more simple sugars than native plants, and an almost 50 percent increase in ethanol yield. 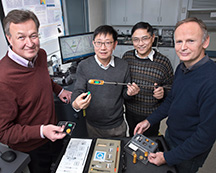 enlarge
Scientists at Brookhaven Lab and Stony Brook University have discovered a new way to generate very low-resistance electric current in a new class of materials. The discovery, made in part using x-ray beams at Brookhaven's National Synchrotron Light Source, points to a range of potential applications in energy, quantum computing, and medical imaging, and possibly even a new mechanism for inducing superconductivity—the ability of some materials to carry current with no energy loss. The materials scientists were surprised when they first measured the significant drop in electrical resistance and the accompanying dramatic increase in conductivity when the material, zirconium pentatelluride, was placed in parallel electric and magnetic fields. But a nuclear theorist who had explored similar behavior of subatomic particles in the magnetic fields created in collisions at Brookhaven's Relativistic Heavy Ion Collider (RHIC) suggested there could be a link. In both cases, the dramatic separation of charges could be triggered by a chiral imbalance—the separation of right- and left-"handed" particles (a property determined by whether a particle's spin is aligned with or against its direction of motion). When the scientists compared their measurements with mathematical predictions of how powerful the increase in conductivity should be with increasing magnetic field strength, they found definitive evidence of this long-predicted chiral magnetic effect—the first such evidence in a materials science laboratory.