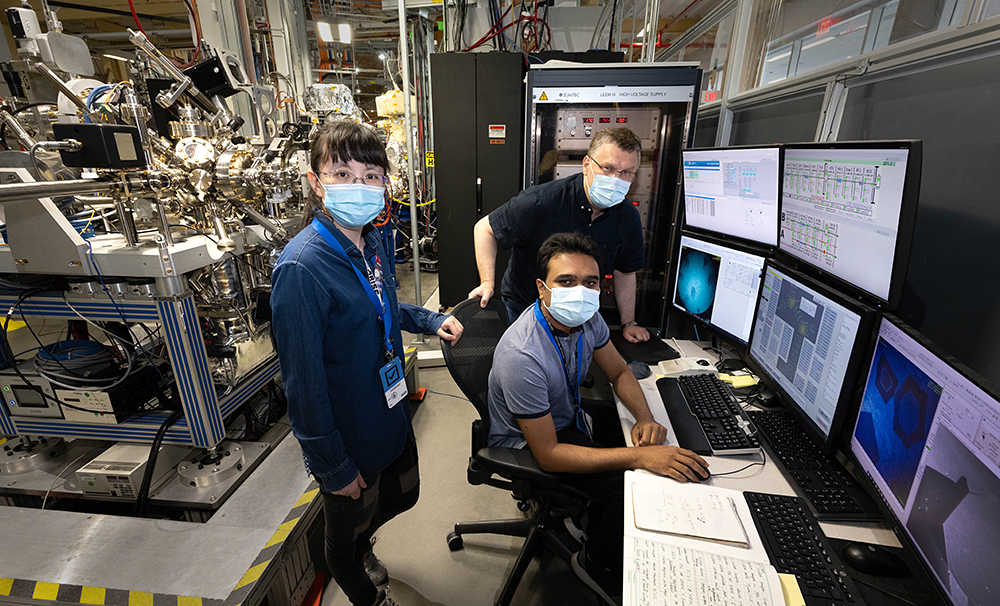 (Left to right) Mengjia Gaowei, Jyoti Biswas, and Jurek Sadowski at the x-ray photoemission electron microscopy/low-energy electron microscopy endstation of the Electron Spectro-Microscopy beamline at the National Synchrotron Light Source II at Brookhaven Lab. The team—which includes staff from the Collider-Accelerator Department, Center for Functional Nanomaterials, Electron-Ion Collider Directorate, and Instrumentation Division at Brookhaven and the research innovation company Euclid Techlabs—will use this endstation to observe intercalation in real time. Intercalation is a reaction in which a material is inserted into a layered structure. In this case, their goal is to insert cesium (an alkali metal) under a layer of graphene or hexagonal boron nitride to react with an antimony (a semi-metal) layer, ultimately forming an alkali antimonide photocathode. Such photocathode materials are of interest for the Electron-Ion Collider, a next-generation facility for nuclear physics research that is being built at Brookhaven.

In January 2020, the U.S. Department of Energy (DOE) selected Brookhaven National Laboratory as the site to build a multibillion-dollar Electron-Ion Collider (EIC). This next-generation facility for nuclear physics research will consist of two intersecting accelerators: one producing an intense beam of electrons and the other a beam of either protons or heavier atomic nuclei. Scientists will study the head-on collisions of these beams, which will produce precise three-dimensional (3-D) snapshots of the internal arrangements of the quarks and gluons that make up the protons and neutrons of atomic nuclei. The goal of these studies is to deepen our understanding of the fundamental building blocks of visible matter in today’s universe and the force holding it all together.

Building this machine over the next decade will require several technical advances, including a way to cool the ion beams. At the EIC, ion beams will heat up as they’re traveling and spread apart by intra-beam scattering, making collisions with electrons less likely. The EIC team plans to cool the ion beams by using high-brightness, high-current electron beams. For this electron cooling system, photocathodes—materials that convert light (photons) into electrons—will serve as the electron source. In particular, they selected photocathodes made of alkali metals—those occupying the first column of the periodic table (lithium, sodium, potassium, rubidium, cesium, and francium)—and antimonides, or compounds with antimony (a semi-metallic element).

“The alkali antimonides are a group of cathode materials with photoemissive properties, meaning they generate electrons when struck by light,” explained Mengjia Gaowei, an associate scientist in Brookhaven Lab’s Collider-Accelerator Department (C-AD).  “These photocathode materials emit electrons because their surface has a relatively low energy barrier for electrons with enough energy to come out. They have a high quantum efficiency at visible-light wavelengths, generating more electrons per photon of light than a lot of other materials.” 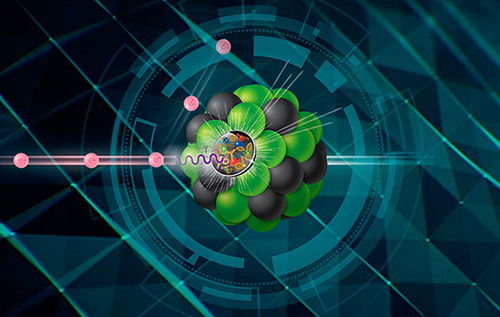 Electrons will collide with protons or larger atomic nuclei at the EIC to produce dynamic 3-D snapshots of the building blocks of all visible matter.

To meet design parameters for EIC electron cooling, the photocathode will need to operate for an extended period (several days) while producing high current (100 milliamperes), exceeding the cathode performance previously reported by the scientific community (65 milliamperes for several hours for multi-alkali photocathodes). As Gaowei explained, multi-alkali photocathodes can degrade due to various factors. For example, heat generated by the laser (source of light) can cause a loss of material under high-current operation. Another issue is ion back bombardment, which happens when the electron beam ionizes residual gas in the vacuum chamber, creating ions that bombard the cathode surface. The surface can also become chemically contaminated; alkali antimonides are very sensitive to water and oxygen.

Ao Liu, deputy director of the Research Department at Euclid Techlabs, LLC, is the Euclid principal investigator (PI) on a DOE Small Business Innovation Research (SBIR) award from the Office of Nuclear Physics to prepare a layer on top of the photocathode in order to protect it against these damages and extend its lifetime. The Brookhaven PI is Gaowei, who is partnering with Liu to lead a collaborative effort including colleagues from Brookhaven’s C-AD, Center for Functional Nanomaterials (CFN), Instrumentation Division, and EIC Directorate.

Liu first started collaborating with Brookhaven as the PI on another related SBIR award, granted in 2020, with Brookhaven EIC physicist Erdong Wang. The goal of this SBIR is to build a radio-frequency (RF) magnetron sputtering source for hexagonal boron nitride (hBN)—a promising two-dimensional (2-D) material for the protection layer. Sputtering is a technique used to deposit thin films of a material onto a surface, or substrate. In RF magnetron sputtering, an RF electric field accelerates ions toward a target containing the material to be deposited, ejecting (sputtering) its atoms from the surface. These atoms deposit onto the substrate to form a thin film.

“A primary goal of these SBIR projects is to find innovative ways to enhance the performance of various beamline components for key DOE accelerator programs such as the EIC,” said Liu.

For this SBIR project, Gaowei’s and Liu’s teams are using a different technique—2-D thin-film wet transfer—to obtain thin films of hBN on an antimony substrate and then deposit the alkali metal cesium on top. The team will try to force cesium to move under the hBN layer to react with the antimony layer in a controlled way—a process known as intercalation—to form the alkali antimonide photocathode. But the first coating candidate they will explore is graphene, or 2-D carbon, on antimony. Euclid is preparing and pre-characterizing the samples at the Center for Nanoscale Materials (CNM) at DOE’s Argonne National Laboratory under an active user proposal. Then, they will bring the samples to Brookhaven for cesium intercalation and final characterization.

A conceptual representation of the encapsulation and growth process through alkali intercalation. Left: Alkali (cesium metal) atoms intercalate beneath the hexagonal boron nitride (hBN) or graphene layer, converting antimony into an alkali antimonide. Right: After intercalation, an alkali antimonide is formed beneath the protective layer of hBN or graphene. (The thickness of each layer is not scaled proportionally.)

“We chose to start with graphene because cesium intercalation has already been proven to happen on a monolayer of graphene,” explained Gaowei. “For hBN, there’s no such results published. Our calculations suggest cesium will have similar behavior on hBN, but we need to test this experimentally. Eventually, hBN will be the final coating material because graphene will not create an emissive surface for the photocathode; it will block the electrons from coming out.”

To monitor the growth of the photocathode under the protective 2-D layer, the team will use the x-ray photoemission electron microscopy (XPEEM)/low-energy electron microscopy (LEEM) endstation of the National Synchrotron Light Source II (NSLS-II) Electron Spectro-Microscopy beamline at Brookhaven. The CFN operates this endstation through a partner user agreement with NSLS-II. Jurek (Jerzy) Sadowski, a materials scientist in the CFN Interface Science and Catalysis Group who is leading the electron spectro-microscopy research program at the CFN, is the endstation’s point of contact. Last year, Gaowei, Sadowski, Wang, and colleagues performed an experiment at this endstation, activating gallium arsenide photocathodes with cesium, tellurium, and oxygen to improve their quantum efficiency. Gallium arsenide is the cathode material of choice to generate the polarized electron beams that collide with ion beams in the EIC.

“The XPEEM/LEEM endstation is a comprehensive spectro-microscopy tool that provides information about the local elemental distribution and electronic structure of a sample,” said Sadowski. “For this project, we will use this tool to observe cesium intercalation in real time. These real-time observations will help us understand how to tune the experimental conditions to get the desired structure. In addition to watching the process unfold, we can do elemental mapping of the surface to see how uniform intercalation is on the scale of a few tenths of nanometers.” 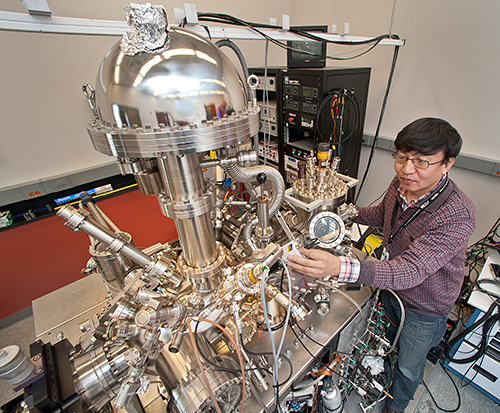 Beyond the beamline experiments, the team will work with staff scientist Xiao Tong and use a multiprobe surface-analysis system in the CFN Proximal Probes Facility to characterize oxidation states. When graphene is transferred onto antimony, antimony inevitably gets oxidized (combines with oxygen) and forms various antimony oxides. Previous studies indicated that these oxides dissociate at increased temperatures. The team will investigate whether they can completely remove the antimony oxides, which would otherwise compromise the performance of cesium antimonide. They will also use the multiprobe system to image the surface structure of graphene on antimony.

“There are a lot of technical challenges to overcome,” said Gaowei. “Our goal through this SBIR award is to test our proposed method of cathode encapsulation, which could increase cathode robustness against poor vacuum while maintaining high quantum efficiency. These enhancements would extend cathode lifetime for applications in nuclear physics facilities, such as electron cooling at EIC.”

To learn more about how to partner with the CFN, contact CFN Assistant Director for Strategic Partnerships Priscilla Antunez at pantunez@bnl.gov.