Inhibitor or Activator: Why not Both? 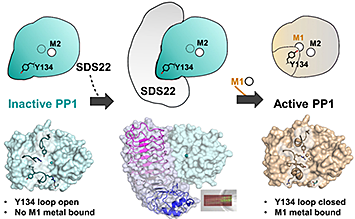 Scientists discovered how the regulatory protein SDS22 acts as both an inhibitor and an activator for protein phosphatase 1 (PP1).

PP1, with PP2A, accounts for more than 90% of the phosphatase activity in eukaryotes. Understanding how PP1 is activated will lead to new treatments for PP1-related diseases, such as cancer.

PP1, a metal-dependent enzyme responsible for more than 50% of all dephosphorylation reactions, forms distinct holoenzymes with more than 200 regulatory proteins, which create specificity for its substrates. Therefore, understanding how PP1 is activated will lead to new treatments for PP1-related diseases, such as cancer.

Intriguingly, one of its most ancient regulators, SDS22, is not only an essential gene but also is both a PP1 inhibitor and an activator. How such divergent functions are mediated by the same regulator is, so far, unknown.

By using biochemical, x-ray crystallographic, and cellular approaches, researchers determined that SDS22 binds a unique, metal-deficient conformation of PP1 that renders PP1 inactive. Furthermore, once the complex forms, it does not permanently dissociate until PP1 binds a M1 metal. The scientists used the Frontier Microfocus Macromolecular Crystallography (FMX) beamline to measure the crystallized protein structure and identity the native metals. The FMX is beamline is part of the life science capability suite at the National Synchrotron Light Source II (NSLS-II), a U.S. Department of Energy Office of Science User Facility located at Brookhaven National Laboratory.

Their results provide a new framework for understanding how the PP1 holoenzyme assembly is regulated; namely, that SDS22 is a "PP1 trap," providing a pool of PP1 poised for the rapid formation of new holoenzymes in response to dynamically changing cellular events. Understanding the mechanisms of PP1 holoenzyme assembly and activation will lead to novel therapies for cancer, drug addiction, and the scores of other diseases associated with PP1 signaling.