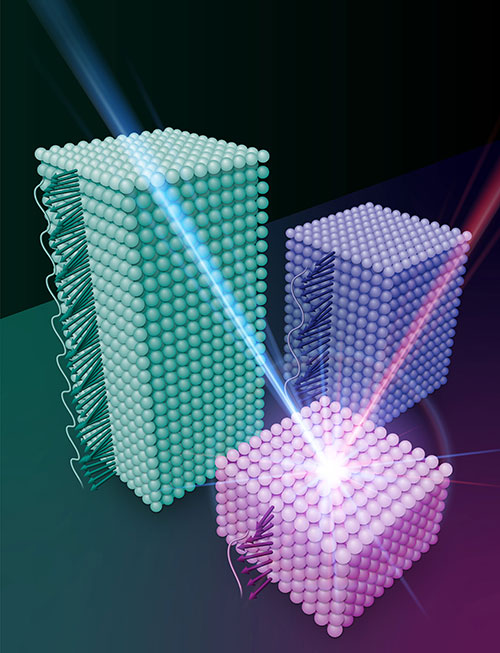 An artist's interpretation of measuring the evolution of the spin dynamics as a function of thickness using resonant inelastic x-ray scattering. Image credit: Brookhaven National Laboratory

Traditional electronics rely on a fundamental property of electrons—charge—to transmit information. But as electrical current flows throughout a device it dissipates heat, limiting how small devices can be designed. Mitigating the risk of overheating often results in sacrificing performance. To meet the demand for smaller and more advanced electronics, researchers are looking into an alternative approach based on a different fundamental property of electrons—spin. Understanding the general behavior of spin excitations in magnetic thin films is the key to unlocking the pathway to new electronics based on this property. While researchers have studied spin dynamics in bulk materials extensively, their studies of the same behavior in thin films were hampered by the lack of the right experimental tools.

In this work, a team of researchers used resonant inelastic x-ray scattering (RIXS) to investigate high-quality, ferromagnetic iron (Fe) films with various thickness, from 100 to 3 unit cells. Through their studies, the researchers discovered that in thick samples the magnetic behavior is consistent with the known information about it through other research techniques. However, they found that as the thickness is reduced, these ferromagnetic spin excitations change and become dependent on the thickness of the film. They found that the origin of this dependance was the change in out-of-plane spin excitations, which could explain them through the loss of Fe bonds at the surface using a Heisenberg model.

These findings, made possible by the SIX beamline, identified thickness as a knob for fine-tuning and controlling magnetic properties in films. This research could also be applied to other systems, opening a new pathway in the development of spin-based electronics.