Each year we compile a list of the biggest advances made by scientists, engineers, and those who support their work at the U.S. Department of Energy’s Brookhaven National Laboratory. From unraveling new details of the particle soup that filled the early universe to designing improvements for batteries, x-ray imaging, and even glass, this year’s selections span a spectrum of size scales and fields of science. Read on for a recap of what our passion for discovery has uncovered this year. 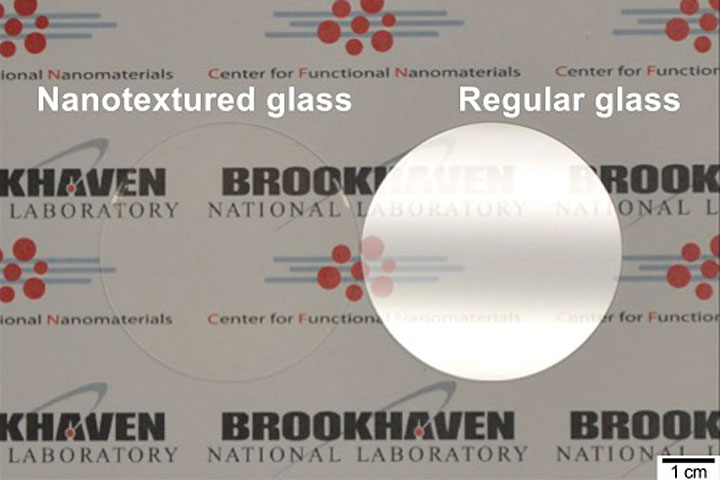 By texturing glass surfaces with features measuring mere billionths of a meter, scientists at Brookhaven Lab’s Center for Functional Nanomaterials (CFN) almost completely eliminated surface reflections. This achievement could enhance solar cell efficiency, support high-power laser applications, and potentially eliminate the nuisance of glare when viewing your smartphone on a sunny day. The ultra-transparent nanotextured glass is antireflective over a broad range of wavelengths (the entire visible and near-infrared spectrum) and viewing angles. Reflections are reduced so much that the glass is essentially invisible. The team has also used this nanotexturing approach to create highly water repellent surfaces that are resistant to fog, potentially leading to improvements in steam turbine condensation coils, car and aircraft windshields, and other materials prone to fogging. 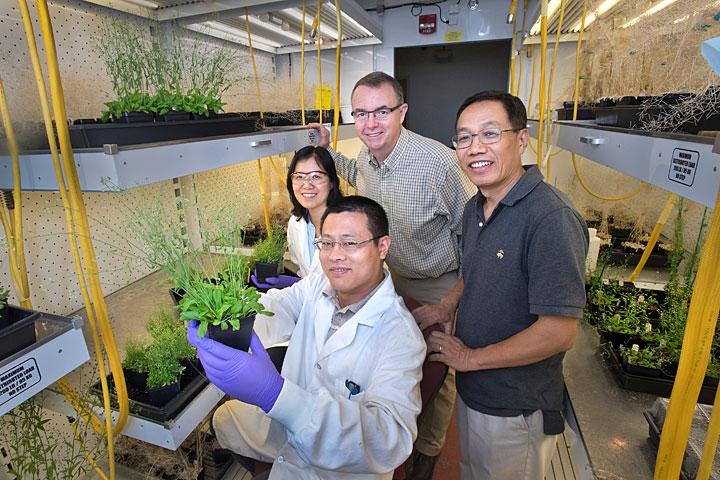 Brookhaven biochemists devised a way to get plants to accumulate oil in their leaves—an advance that could make plant oils more abundant and accessible for producing biofuels and other useful chemicals. Instead of having to extract oils from seeds, where plants normally store oil, scientists could make use of vegetative tissues packed with large quantities of energy-dense lipids. The team ramped up leaf-oil accumulation by selectively combining plants with traits that first led the leaves to hold onto more sugar. Though not quite as simple packing on extra pounds by consuming sweet treats, the approach took advantage of an earlier discovery of a link between sugar levels and oil accumulation in plants. Understanding these biochemical pathways and the genes that regulate them helped the scientists tip the balance to fatten up the leaves. 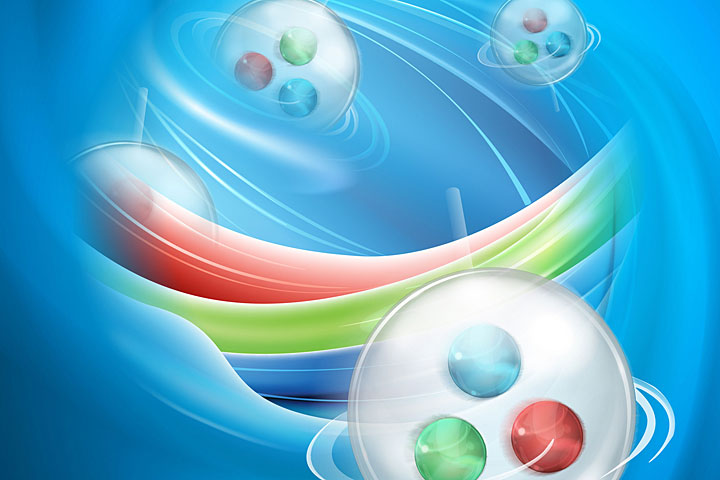 New findings from particle collisions at Brookhaven’s Relativistic Heavy Ion Collider (RHIC) revealed that the “perfect” liquid created in these collisions—which mimics the particle soup that filled the early universe—swirls faster than any known fluid.  The results on “vorticity,” or swirling fluid motion, will help scientists sort among different theories describing this “quark-gluon plasma.” With more data, they could use vorticity to measure the strength of the plasma’s magnetic field, which influences how charged particles emerge from the collisions. Another set of RHIC data showed that particles containing heavy quarks get caught up in the flow of the plasma. These findings suggest that the heavy particles are interacting directly with particles that make up the plasma, and should help scientists make precise measurements of its properties. RHIC physicists also just demonstrated the first use of high-performance computing to dramatically reduce the time it takes to make detailed collision data available for scientists to analyze—so more RHIC discoveries should be coming soon! 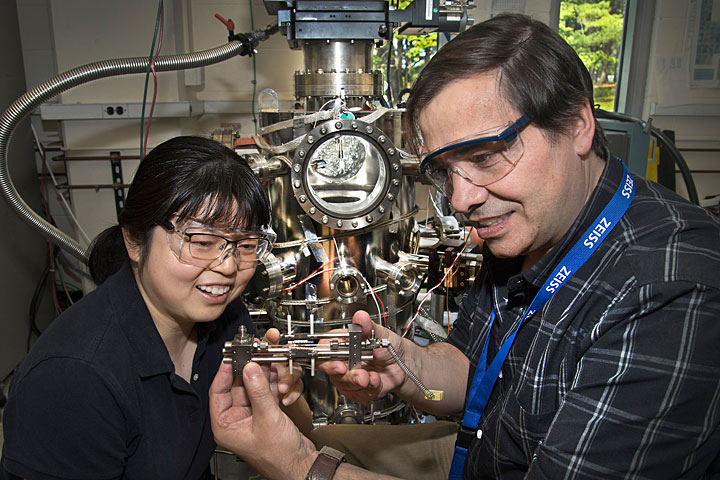 Brookhaven chemists conducted essential studies to decipher the details of a new low-temperature catalyst for producing high-purity hydrogen gas. Developed by collaborators at Peking University, the catalyst operates at low temperature and pressure, and could be particularly useful in fuel-cell-powered cars. The Brookhaven team analyzed the catalyst as it was operating under industrial conditions using x-ray diffraction at the National Synchrotron Light Source (NSLS). These operando experiments revealed how the configuration of atoms changed under different operating conditions, including at different temperatures. The team then used those structural details to develop models and a theoretical framework to explain why the catalyst works so well, using computational resources at Brookhaven’s Center for Functional Nanomaterials (CFN). Those studies and additional input from experiments at Oak Ridge National Laboratory, Lawrence Berkeley National Laboratory, and in China offered insight into how a particular configuration stabilizes the key intermediate chemical that forms as the reaction proceeds, which determines the rate of hydrogen production. These details could lead to the design of improved catalysts for a range of applications. 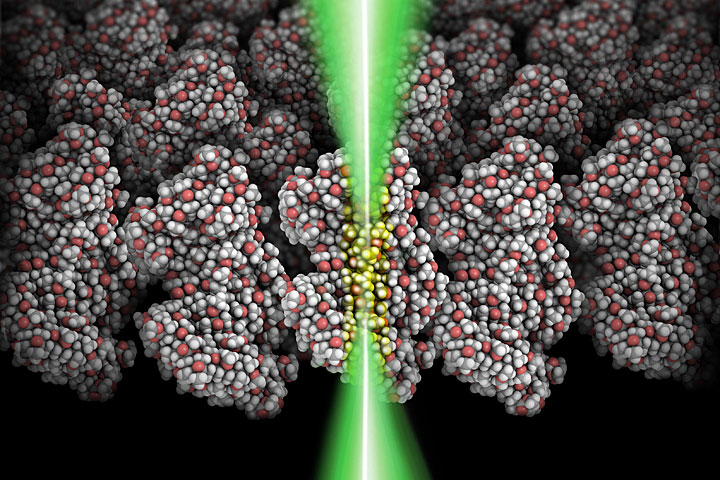 Scientists at Brookhaven Lab’s Center for Functional Nanomaterials (CFN) set a new record for patterning materials at the nanoscale. Using a focused beam of electrons, they “drew” individual features as small as one nanometer spaced just 11 nanometers apart on the surface of a polymer that can be used to transfer the pattern to a wide array of other materials. Such small-scale patterning, which surpasses the limits currently achievable with commercial patterning instruments, could dramatically alter material properties, such as color, chemical reactivity, electrical conductivity, and light interactions. The scientists pushed the resolution limits by installing a pattern generator—an electronic system that precisely moves the electron beam over a sample to draw patterns designed with computer software—in one of CFN’s aberration-corrected scanning transmission electron microscopes, a specialized microscope that provides a focused electron beam at the atomic scale. Essentially, they converted an imaging tool into a drawing tool that is capable of not only taking atomic-resolution images but also making atomic-resolution structures. This new tool is now available for all scientists visiting CFN. 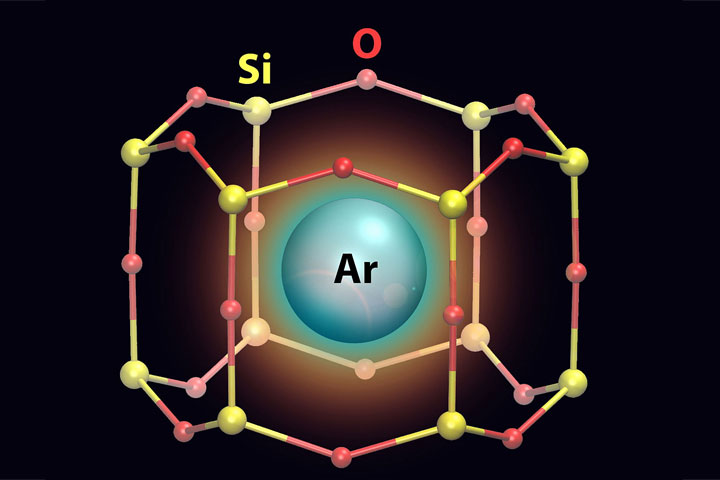 A team of scientists using two-dimensional model surfaces to study catalysts discovered that these 2D structures could trap individual atoms of gas. They found argon gas atoms trapped inside the structure’s nanosized pores. The discovery opens the potential to use traditional surface-science tools to perform detailed studies of single gas atoms in confinement, and could lead to the design of new types of adsorbent materials and membranes for capturing gases. Such 2D “cages” could potentially trap radioactive krypton and xenon generated by nuclear power plants, or act as molecular sieves for filtering carbon monoxide and other small molecules like hydrogen and oxygen gas. These experiments were carried out at the Lab’s Center for Functional Nanomaterials (CFN), National Synchrotron Light Source (the original) and NSLS-II, and in the Lab's Chemistry Division. The scientists will continue to explore how different pore sizes affect the materials’ ability to trap and filter gas molecules. 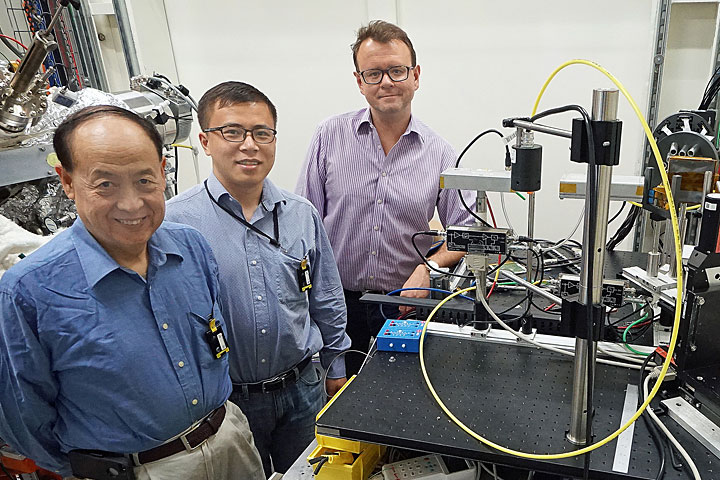 A team of scientists from Brookhaven and the Chinese Academy of Sciences has designed a new type of cathode that could make the mass production of sodium batteries more feasible. Batteries based on plentiful and low-cost sodium could help offset increasing demand and rising costs of lithium batteries. Sodium batteries could facilitate a more cost-efficient production process for grid-scale energy storage systems—so we can tap into excess energy generated by solar and wind power when the sun isn’t shining and the wind isn’t blowing—and also be used in consumer electronics and electric vehicles. The team overcame a tendency of the metals in sodium battery cathodes to break down when exposed to air by substituting different metals and increasing the space between the metals. They used x-ray techniques at the National Synchrotron Light Source II (NSLS-II) to identify the ideal composition and arrangement for maximizing battery efficiency and lifetime—a major step forward in enabling future mass production of these batteries. 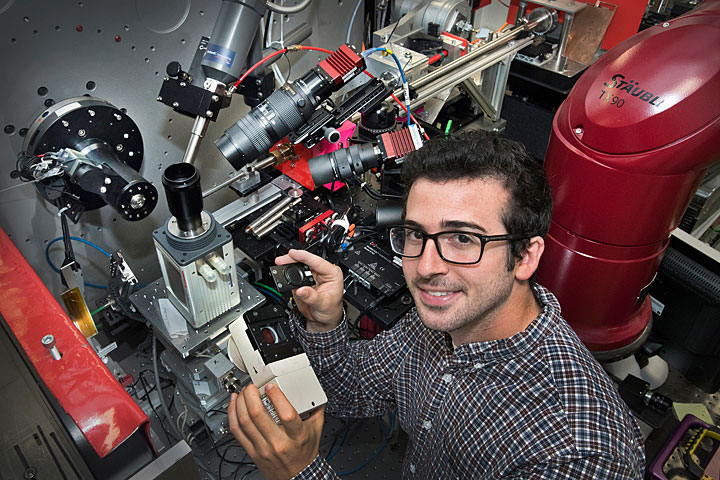 Using individual x-rays to characterize how light moves within scintillators—a component of x-ray detectors—scientists from Stony Brook University and Brookhaven solved a mystery that could lead to improved technology for medical imaging. Scintillators absorb x-rays and turn them into bursts of visible light that produce shadow images of the body’s internal structures. But “noise” created by light bouncing around inside the scintillator can reduce image resolution. The scientists used precision x-ray beams at the National Synchrotron Light Source II (NSLS-II) to study this phenomenon and identified the sources of the noise. The findings suggest several ways to improve scintillators, which could lead to a new generation of x-ray detectors that produce higher quality images with lower x-ray doses. 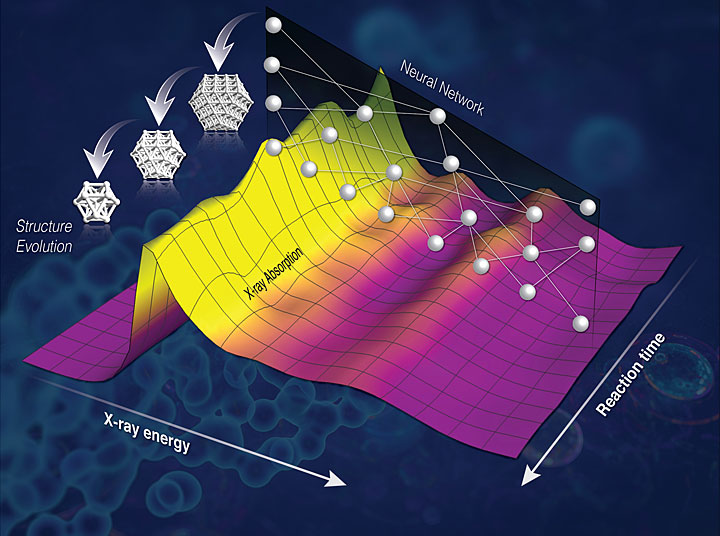 Brookhaven and Stony Brook University chemists, physicists, and computational scientists teamed up to develop a new method to capture chemistry in action. The method relies on computers that have been trained to recognize hidden signs of the complex dance of atoms as they shuffle positions and break and make new bonds during chemical reactions. Experts in Brookhaven’s Computational Science Initiative and Center for Functional Nanomaterials (CFN) used neural networks and machine learning techniques to teach computers to decode previously inaccessible information from x-ray data. The team then used that data to decipher 3D nanoscale structures. The technique will allow on-the-fly analysis of how catalysts change during reactions, providing crucial information scientists need to decipher why a particular reaction slows down, or starts producing an unwanted product—so they can tweak the reaction conditions or catalyst chemistry to achieve desired results. 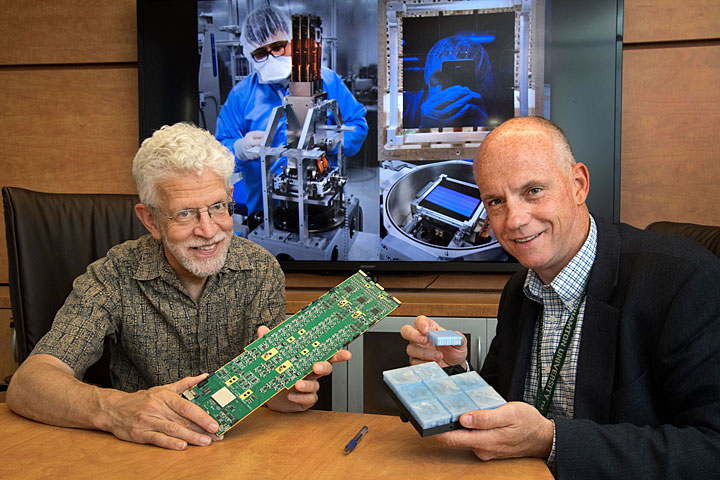 Brookhaven scientists completed and delivered the first “science raft” for the Large Synoptic Survey Telescope (LSST), a massive telescope designed to capture images of the universe like never before. The raft is part of the sensor array that will make up the crucial camera segment of the telescope, and its completion is the first major milestone for Brookhaven’s role in the project. The LSST camera will be the largest digital camera ever built for astronomy and astrophysics. It will provide researchers with the widest, deepest, and fastest views of the night sky for unprecedented studies of the Milky Way, the solar system, dark matter, dark energy, and much more. SLAC National Accelerator Laboratory is assembling and testing the camera from parts built by a large collaboration of labs and universities. The Brookhaven team has completed assembly of eight rafts to date, and will ship one every few weeks over the next year.