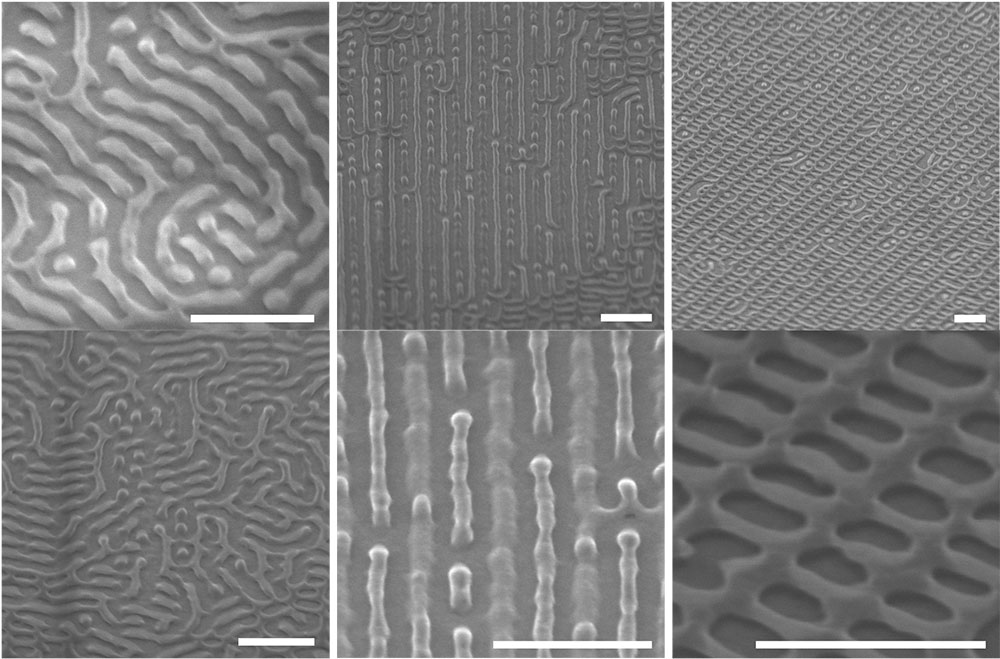 UPTON, NY—Scientists at the U.S. Department of Energy’s (DOE) Brookhaven National Laboratory have successfully demonstrated that autonomous methods can discover new materials. The artificial intelligence (AI)-driven technique led to the discovery of three new nanostructures, including a first-of-its-kind nanoscale “ladder.” The research was published today in Science Advances.

The newly discovered structures were formed by a process called self-assembly, in which a material’s molecules organize themselves into unique patterns. Scientists at Brookhaven’s Center for Functional Nanomaterials (CFN) are experts at directing the self-assembly process, creating templates for materials to form desirable arrangements for applications in microelectronics, catalysis, and more. Their discovery of the nanoscale ladder and other new structures further widens the scope of self-assembly’s applications.

“Self-assembly can be used as a technique for nanopatterning, which is a driver for advances in microelectronics and computer hardware,” said CFN scientist and co-author Gregory Doerk. “These technologies are always pushing for higher resolution using smaller nanopatterns. You can get really small and tightly controlled features from self-assembling materials, but they do not necessarily obey the kind of rules that we lay out for circuits, for example. By directing self-assembly using a template, we can form patterns that are more useful.”

Staff scientists at CFN, which is a DOE Office of Science User Facility, aim to build a library of self-assembled nanopattern types to broaden their applications. In previous studies, they demonstrated that new types of patterns are made possible by blending two self-assembling materials together. 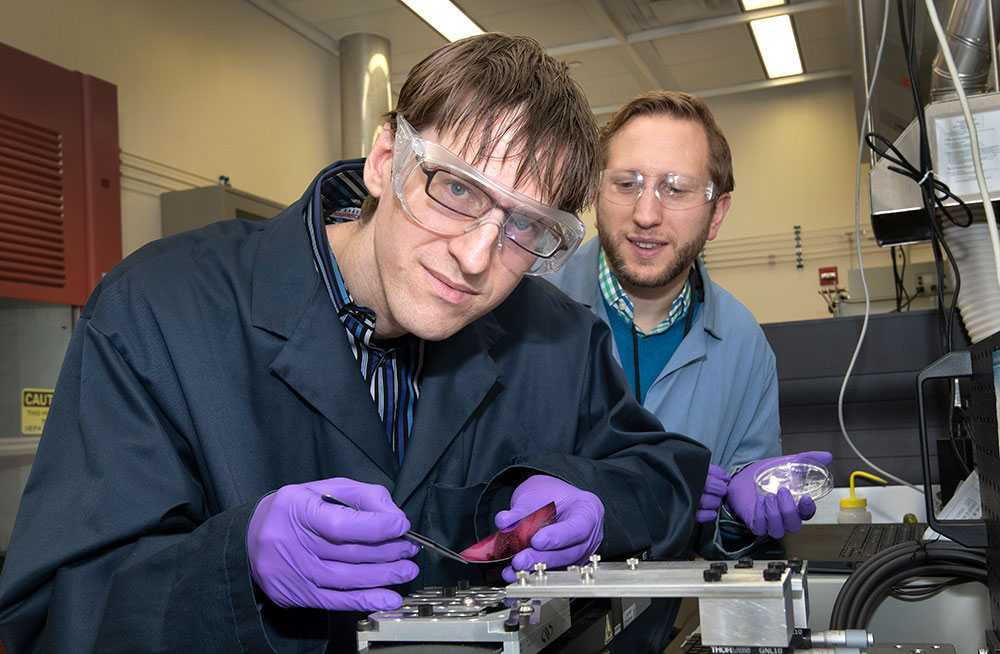 “The fact that we can now create a ladder structure, which no one has ever dreamed of before, is amazing,” said CFN group leader and co-author Kevin Yager. “Traditional self-assembly can only form relatively simple structures like cylinders, sheets, and spheres. But by blending two materials together and using just the right chemical grating, we’ve found that entirely new structures are possible.”

Blending self-assembling materials together has enabled CFN scientists to uncover unique structures, but it has also created new challenges. With many more parameters to control in the self-assembly process, finding the right combination of parameters to create new and useful structures is a battle against time. To accelerate their research, CFN scientists leveraged a new AI capability: autonomous experimentation.

In collaboration with the Center for Advanced Mathematics for Energy Research Applications (CAMERA) at DOE’s Lawrence Berkeley National Laboratory, Brookhaven scientists at CFN and the National Synchrotron Light Source II (NSLS-II), another DOE Office of Science User Facility at Brookhaven Lab, have been developing an AI framework that can autonomously define and perform all the steps of an experiment. CAMERA's gpCAM algorithm drives the framework's autonomous decision-making. The latest research is the team’s first successful demonstration of the algorithm’s ability to discover new materials. 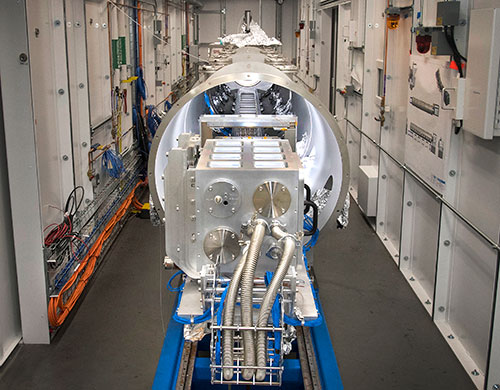 “gpCAM is a flexible algorithm and software for autonomous experimentation,” said Berkeley Lab scientist and co-author Marcus Noack. “It was used particularly ingeniously in this study to autonomously explore different features of the model.”

“With help from our colleagues at Berkeley Lab, we had this software and methodology ready to go, and now we’ve successfully used it to discover new materials,” Yager said. “We’ve now learned enough about autonomous science that we can take a materials problem and convert it into an autonomous problem pretty easily.”

To accelerate materials discovery using their new algorithm, the team first developed a complex sample with a spectrum of properties for analysis. Researchers fabricated the sample using the CFN nanofabrication facility and carried out the self-assembly in the CFN material synthesis facility.

“An old school way of doing material science is to synthesize a sample, measure it, learn from it, and then go back and make a different sample and keep iterating that process,” Yager said. “Instead, we made a sample that has a gradient of every parameter we’re interested in. That single sample is thus a vast collection of many distinct material structures.”

Then, the team brought the sample to NSLS-II, which generates ultrabright x-rays for studying the structure of materials. CFN operates three experimental stations in partnership with NSLS-II, one of which was used in this study, the Soft Matter Interfaces (SMI) beamline.

“One of the SMI beamline’s strengths is its ability to focus the x-ray beam on the sample down to microns,” said NSLS-II scientist and co-author Masa Fukuto. “By analyzing how these microbeam x-rays get scattered by the material, we learn about the material’s local structure at the illuminated spot. Measurements at many different spots can then reveal how the local structure varies across the gradient sample. In this work, we let the AI algorithm pick, on the fly, which spot to measure next to maximize the value of each measurement.”

As the sample was measured at the SMI beamline, the algorithm, without human intervention, created of model of the material’s numerous and diverse set of structures. The model updated itself with each subsequent x-ray measurement, making every measurement more insightful and accurate. 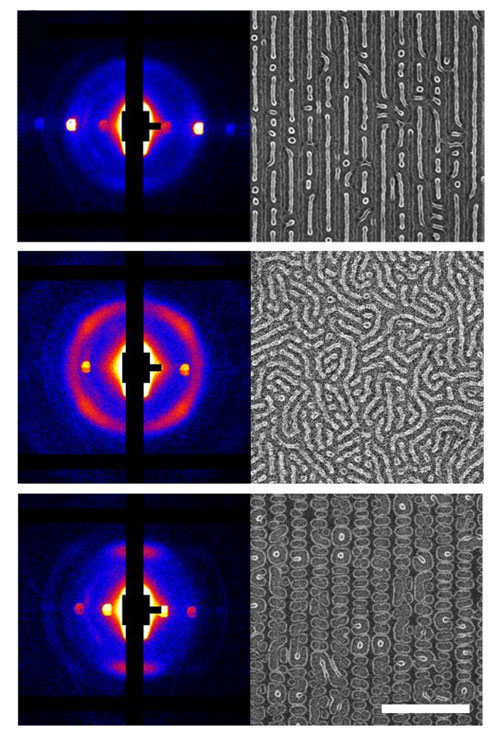 In a matter of hours, the algorithm had identified three key areas in the complex sample for the CFN researchers to study more closely. They used the CFN electron microscopy facility to image those key areas in exquisite detail, uncovering the rails and rungs of a nanoscale ladder, among other novel features.

From start to finish, the experiment ran about six hours. The researchers estimate they would have needed about a month to make this discovery using traditional methods.

“Autonomous methods can tremendously accelerate discovery,” Yager said. “It’s essentially ‘tightening’ the usual discovery loop of science, so that we cycle between hypotheses and measurements more quickly. Beyond just speed, however, autonomous methods increase the scope of what we can study, meaning we can tackle more challenging science problems.”

“Moving forward, we want to investigate the complex interplay among multiple parameters. We conducted simulations using the CFN computer cluster that verified our experimental results, but they also suggested how other parameters, such as film thickness, can also play an important role,” Doerk said.

The team is actively applying their autonomous research method to even more challenging material discovery problems in self-assembly, as well as other classes of materials. Autonomous discovery methods are adaptable and can be applied to nearly any research problem.

“We are now deploying these methods to the broad community of users who come to CFN and NSLS-II to conduct experiments,” Yager said. “Anyone can work with us to accelerate the exploration of their materials research. We foresee this empowering a host of new discoveries in the coming years, including in national priority areas like clean energy and microelectronics.”