In self-assembly, molecules are designed to form in a spontaneous manner desired structures, allowing rapid and scalable fabrication. However, this paradigm generates a limited set of simple shapes. CFN staff scientists have demonstrated how layers of self-assembling materials can be used to create nanostructures never realized before. Each layer guides the assembly of subsequent layers, allowing novel structures to be designed.

By vastly increasing the diversity and sophistication of nanomaterials, increasingly demanding multi-functional applications can be pursued and realized. 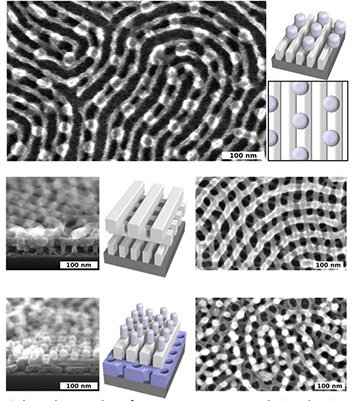 “Self-assembly” is a powerful concept for fabricating nanomaterials. Molecules are designed to spontaneously assemble into desired nanoscale structures, allowing large amounts of nanomaterials to be rapidly generated. However, a fairly small library of possible shapes can be formed in this way. In fact, self-assembly emphasizes simple shapes that minimize surface area, such as spheres or cylinders. In this work, we demonstrate how self-assembly can be guided to create more complex nanostructures. By layering self-assembling materials, each layer is organized by the layers that came before. In this way, one can guide the layered materials to form shapes not typically observed in self-assembly, including squares and rectangles. Using this technique, CFN researchers have demonstrated a large library of new, never-before-seen, nanoscale constructs—all spontaneously assembled over large areas.

Research carried out at the Center for Functional Nanomaterials, and the National Synchrotron Light Source II, Brookhaven National Laboratory, which are supported by the U.S. Department of Energy, Office of Basic Energy Sciences, under Contract No. DE-SC0012704.