CFN scientists have created a general theoretical model that explains the observed wide diversity of periodic structures formed through nanoparticle self-assembly.  The theory applies to a broad portfolio of experimental systems, across nanometer- and micron-length scales. The core interactions dictating the ultimate structure of the assembly are between two types of mutually attractive spherical particles.

Nanoparticle assemblies allow design of new optical, electronic, and catalytic functions that naturally-forming materials do not have. This theoretical study introduces a universal framework for predicting the structure of assemblies as a function of the size and relative composition of the constituent nanoparticle building blocks. 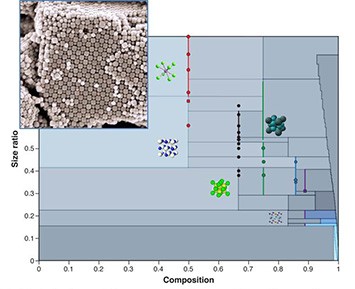 Calculated structures of binary nanoparticles assemblies. The resulting crystals are different, depending on the relative compositions of the two constituent particles, and the size ratio of the components. (Inset) Electron microscope image of an experimentally realized 3D binary crystal assembled from nanoparticles.

Self-assembly of nanoparticles and colloids into crystals, or ‘superlattices,’ has proven to be a useful way to create structures with properties not found in naturally forming materials.  Nanostructures with enhanced electronic, optical, mechanical, and catalytic function have been experimentally realized by this approach — which is typically Edisonian in nature.  This work introduces a general, remarkably rich theoretical model that explains the experimentally-observed diversity of structures and high degree of universality of particle assemblies.  The model describes two-component systems of mutually-attractive (‘sticky’)  spheres of different sizes.  An intuitive geometric procedure is used for constructing a diagram of different structures that form depending on the relative ratio of nanoparticle constituents, and their relative size.  The model’s value is in predicting the phase behavior of a broad range of self-assembly scenarios, including DNA-mediated assembly, electrostatic assembly, and assemblies induced by controlled drying.

The CFN Theory and Computation Facility was used to model particle superlattices and to calculate 2D and 3D phase diagrams.

This research was carried out at the Center for Functional Nanomaterials at Brookhaven National Laboratory (BNL), which is supported by the U.S. Department of Energy, Office of Basic Energy Sciences, under Contract no. DE-SC0012704.