CFN users and staff have directly observed how electron beams split water into hydrogen and oxygen using a perovskite oxide catalyst. This was found to not occur at the surface – as would be expected – but rather in the bulk, leading to bubbles in the catalyst that expand and contract with time.

The interaction between water and oxides is critical for many applications, including energy storage, photocatalysis, surface wetting, and sensors.  This work provides direct, nanoscale insight into the way an applied electrical bias can split water to yield hydrogen and oxygen, using a known, efficient photocatalyst. 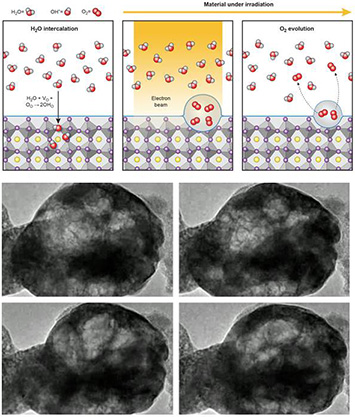 Top: Schematic illustrating water molecules entering the perovskite crystal, then breaking into hydrogen and water, leading to the formation of bubbles in the near surface region. Bottom: TEM images extracted from real time observations of the process.

Understanding the interaction between water and oxides is critical for many technological applications, including energy storage materials, surface wetting/self-cleaning, photocatalysis and sensors. In this study, strong structural oscillations of a perovskite oxide ceramic (Ba0.5Sr0.5Co0.8Fe0.2O3−δ, or BSCF) were observed in the presence of both H2O vapor and electron irradiation. These oscillations are related to the formation and collapse of gaseous bubbles, and spectroscopic measurements confirmed that the were a result of O2 formation cause by first incorporation, and then splitting of H2O in the BSCF lattice. The structural oscillations of BSCF can be attributed to the fact that its oxygen 2p-band center is close to the Fermi level, which leads to a low energy penalty for oxygen vacancy formation, high ion mobility, and high water uptake. This work provides surprising insights into the interaction between water and oxides under electron-beam irradiation, and has implications for our understanding of what leads to effective water splitting in materials.

This work was supported in part by the MRSEC Program of the National Science Foundation under award number DMR-0819762 and the Skoltech-MIT Center for Electrochemical Energy Storage. The ETEM/EELS experiments were carried out at the Center for Functional Nanomaterials, Brookhaven National Laboratory, which is supported by the US Department of Energy, Office of Basic Energy Sciences, under Contract No. DE-SC0012704, which also supported A.D.G. and E.A.S.