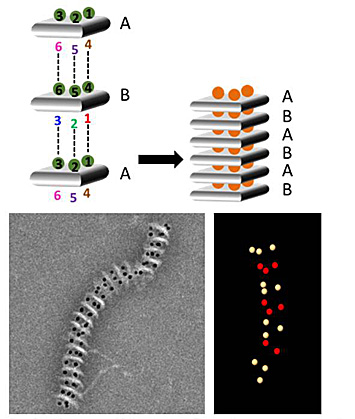 “By-design” assembly of materials and devices from nanoscale inorganic components requires the development of new and improved fabrication methods. Conventional self-assembly is often limited in its ability to simultaneously control material morphology and structure. This work demonstrates a new approach to addressing this challenge, by assembling nanoparticles in a linear “pillar” morphology with regulated internal configurations. This method is inspired by supramolecular systems, where intermolecular stacking guides the assembly process to form diverse linear morphologies. Programmable stacking interactions were realized through incorporation of DNA coded recognition between the designed planar nanoparticle clusters. This resulted in formation of multilayered pillar architectures with a well-defined internal nanoparticle organization. By controlling the number, position, size, and composition of the nanoparticles in each layer, a broad range of nanoparticle pillars were assembled and characterized in detail. In addition, the study shows the utility of this stacking assembly strategy for investigating plasmonic and electrical transport properties.