A team of researchers from Brookhaven National Laboratory and Chungnam National University have advanced fundamental understanding of the complex ways that ceria (CeO2) catalyst nanoarchitectures grow on on practical anatase titania (TiO2) powder supports, by carrying out a bottom-up study guided by density functional theory calculations.

The performance of heterogeneous catalysts relies on control of the catalyst structure on a powder oxide support.  Understanding the ways catalysts grow on the different facets of oxide support materials is key to improved performance. 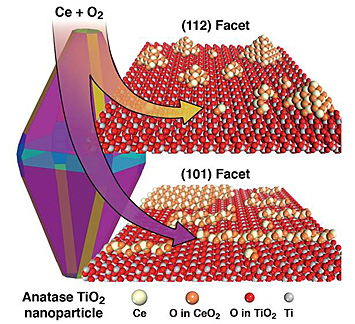 Schematic for growth of ceria nanostructure on different facets of an anatase TiO2 nanoparticle powder support through deposition of Ce with oxygen. (Top) The higher surface energy TiO2 (112) facet is stabilized by CeO2 deposition, so that CeO2 forms coherent 3D nanoparticles with the increasing amount of deposition. (Bottom) By contrast, CeO2 deposited onto the TiO2 (101) facet forms 1D chains or 2D plates.

The leading edge of catalysis research motivates physical understanding of the growth of nanoscale oxide structures on different supporting oxide materials that are themselves also nanostructured. This research opens up for consideration a diverse range of facets on the support material, versus the single facet typically involved in wide-area growth of thin films. Here, we study the growth of ceria nanoarchitectures on practical anatase titania powders as a showcase inspired by recent experiments. Density Functional Theory (DFT) based methods are employed to characterize and rationalize the broad array of low energy nanostructures that emerge.  Using a bottom-up approach, we are able to identify and characterize the underlying mechanisms for the facet-dependent growth of various ceria motifs on anatase titania based on formation energy. These motifs include 0D clusters, 1D chains, 2D plates and 3D nanoparticles. The ceria growth mode and morphology is determined by the interplay of several factors including the role of the common cation valence, the interface template effect for different facets of the anatase support, enhanced ionic binding for more compact ceria motifs and the local structural flexibility of oxygen ions in bridging the interface between anatase and ceria structures.

The research was carried out at Brookhaven National Laboratory under Contract DE-SC0012704 with the U.S. Department of Energy. The DFT calculations were performed using computational resources at the Center for Functional Nanomaterials, a user facility at Brookhaven National Laboratory, and at the National Energy Research Scienti?c Computing Center (NERSC), which is supported by the O?ce of Science of the U.S. DOE under Contract No. DE-AC02-05CH11231. This work was also partially supported by the Basic Science Research Program through the National Research Foundation of Korea (NRF) funded by the Ministry of Education (NRF-2014R1A1A2057335).