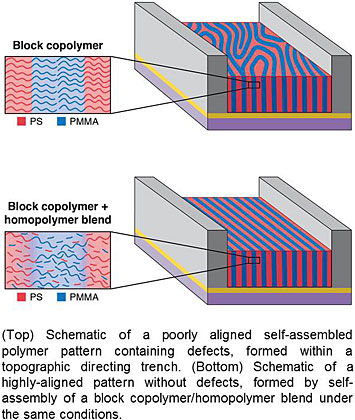 Although polymer self-assembly offers a cost-effective method for creating nanoscale patterns across wide areas, slow ordering kinetics typically result in self-assembled patterns that are riddled with defects.  In this work, CFN scientists discovered that mixtures self-assembling block copolymers combined with small homopolymers can speed the process of nanoscale pattern formation by more than 10 times and improve their quality — providing a material for efficient, wide-area nanopatterning in a fraction of the time compared to block copolymers alone.

When heated, block copolymers can spontaneously self-assemble into nanopatterns over large areas, offering a convenient, economical alternative to lithography in applications like designer surface texturing or nanodevice fabrication.  However, ubiquitous pattern defects emerging in the initial stages of self-assembly become trapped due to the poor ordering kinetics inherent to block copolymer thin films.  In fact, the self-assembled structure itself imposes energetic barriers inhibiting polymer reorganization necessary to remove defects, making long-range ordered patterns practically impossible in many cases.  This work shows that much smaller homopolymers of the same type as the constituent blocks of the copolymer can be blended with it in very high proportions (> 50% by weight), minimally affecting the local self-assembled structure while vastly improving the long range pattern order.  Despite the blending, the patterns may be readily transferred into underlying substrates by common etch processes.  Moreover, the uniformly distributed homopolymer reduces the energy barriers to polymer reorganization, accelerating the ordering process at a basic level and enabling the fabrication of highly aligned self-assembled patterns – such as unidirectional line gratings spanning widths of over 80 times the self-assembled feature size in as little as 2 minutes on a hot plate – making this a powerful yet practical solution to one of the most long-standing issues in nanopatterning by self-assembly.

CFN Materials Synthesis and Nanofabrication facilities were used to fabricate and characterize the self-assembled polymer patterns.