Magnetic Quasicrystals are Both Ordered and Disordered Nanomaterials 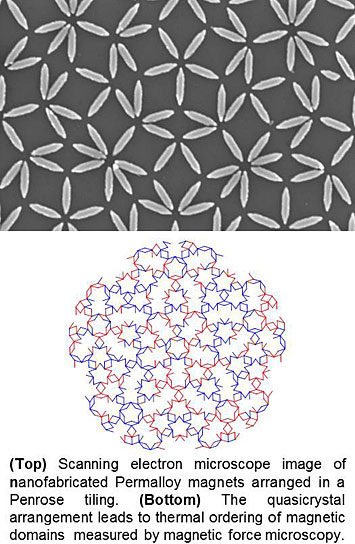 Quasicrystals made of Penrose tilings are fascinating structural arrangements with small repeating units but without any overall pattern periodicity.  They are mesmerizing, because the human eye seeks to find patterns that do not quite exist.  In this work, the researchers observed that quasicrystals made of nanomagnets form magnetic states having both an ordered, rigid ‘skeleton’ spanning the entire network, and smaller domains with configurations that are switchable without energy cost.

Bistable magnetic elements can naturally represent bits of stored digital information, and interactions between elements can be used to perform logical operations. In magnetic quasicrystals, different groups of nanomagnets can play each role.

Artificial frustrated systems offer a playground for studying the emergent properties of interacting systems.  Most research to date has been performed on spatially periodic systems, known as artificial spin ices when the interacting elements are magnetic. In this work, we have studied artificial magnetic quasicrystals based on quasiperiodic Penrose tiling patterns of interacting nanomagnets. We construct a low energy configuration from a step-by-step approach that we propose as a ground state. Topologically induced emergent frustration means that this configuration cannot be constructed from vertices in their ground states.  It has two parts, a quasi-one-dimensional ’skeleton’ that spans the entire pattern and is capable of long-range order, surrounding ‘flippable’ clusters of macrospins that lead to macroscopic degeneracy.  Magnetic force microscopy of Penrose tiling arrays revealed superdomains that are larger for more strongly coupled arrays, especially after annealing the array above its blocking temperature.

This research used resources of the Center for Functional Nanomaterials, which is a U.S. DOE Office of Science Facility, at Brookhaven National Laboratory under Contract No. DE-SC0012704, and was also supported by the EPSRC (grant EP/L00285X/1). ZB was supported by the ERC Advanced Grant no. 291002 SIZEFFECTS.