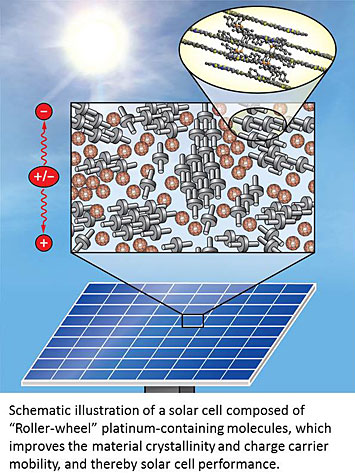 Scientists from the University of New Mexico and CFN synthesized and characterized new platinum-containing (Pt) conjugated small molecules with an unconventional “roller-wheel” structure, improving molecular ordering and boosting the performance of solar cells made from these materials to 5.9% — a nearly 50% improvement over previous Pt-containing small molecules.

Platinum (Pt) atoms can be used to increase the triplet population through intersystem crossings after initial excitation, and these long triplet-state lifetimes can then be used to increase the collection of excitons from organic photovoltaic materials.  Researchers at the University of New Mexico have synthesized novel organic molecules with Pt groups attached in the side chain, rather than along the main molecular chain as in other previously-synthesized molecules.  The side-chain position moves the bulky Pt groups out of the way, so that molecules are better able to crystallize through for pi-orbital interactions.  This has the effect of increasing the material crystallinity and improving its electrical conductivity.  The stacking structure is confirmed with single crystal X-ray scattering  analysis.  Theoretical calculations from CFN researchers characterized the singlet and triplet excited states using time-dependent density functional theory and the natural transition orbitals, with the results suggesting conditions that can lead to efficient intersystem crossing.  A large triplet yield in these materials is corroborated using transient absorption spectroscopy measurements.

The authors would like to acknowledge NSF (DMR-1453083) for financial support for this research. NM EPSCoR (NSF Grant No. IIA-1301346) and USDA (NIFA 2015-38422-24059) are acknowledged for partially supporting the research. The Bruker  X-ray diffractometer was purchased via a National Science Foundation CRIF:MU award to the University of New Mexico (CHE 04-43580). All computations were carried out at the Center for Functional Nanomaterials, Brookhaven National Laboratory, which is supported by the U.S. Department of Energy, Office of Basic Energy Sciences, under contract DE-SC0012704.  JJR acknowledges NSF (Grant CHE 1602240) for financial support.