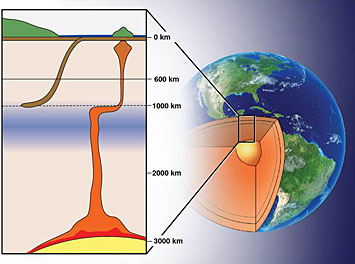 Schematic cross-section of Earth's crust and mantle, showing a profile from the surface to a depth of 3000 km. A local maximum in the viscosity of ferropericlase, which occurs at depths between 700-1000 km, causes subducting slabs from Earth's crust to stagnate at this depth, and also deflects plumes rising from Earth's core.

CFN users from Yale University measured the melting behavior of ferropericlase (MgO–FeO), one of the main constituents of Earth's lower mantle, at high pressures using a laser-heated diamond-anvil cell.  The measurements indicate that ferropericlase has a local viscosity maximum at pressures of ~40 GPa, likely caused by a spin transition occurring in iron.

The melting relations determined by this study predict the ferropericlase viscosity depth profiles required to explain some of the observed tectonics of Earth’s continents, such as subducting slabs stagnating at depths between 700 and 1000 kilometers.

Convection provides the mechanism underlying the tectonics of Earth’s continents, including subduction of the oceanic lithosphere into the mantle as “slabs,” and new rock generation by volcanism. Stagnation of subducting slabs and deflection of rising plumes in Earth’s shallow lower mantle have been suggested to result from a viscosity increase at those depths.  However, the mechanism for this increase has remained elusive until now. In this work, CFN users examined the melting behavior in ferropericlase (a MgO–FeO binary system) at high pressures using the laser-heated diamond-anvil cell, and showed that the system exhibits a local viscosity maximum at ~40 GPa — likely caused by the spin transition of iron. This result supports a single mechanism being responsible for both slab stagnation and plume deflection in in Earth’s mantle.

The CFN Nanofabrication Facility was used to prepare quenched samples for compositional analyses by electron microscopy.

This work was supported by NSF (EAR-1321956, EAR-1551348). FIB use was supported by YINQE and NSF MRSEC DMR 1119826 and by the Center for Functional Nanomaterials, and National Synchrotron Light Source II at Brookhaven National Laboratory, a U.S. Department of Energy (DOE) Office of Science User Facility operated for the DOE Office of Science under Contract No. DE-SC0012704. This research was also partially supported by COMPRES, the Consortium for Materials Properties Research in Earth