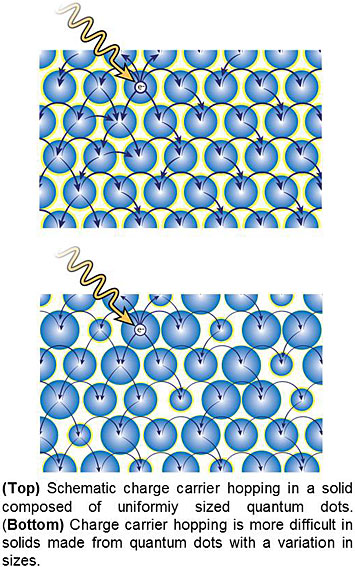 Researchers from MIT combined ultrafast transient absorption measurements and kinetic Monte Carlo simulations to show that the intrinsic electrical mobility of materials made by assembly of lead sulfide quantum dots decreases with increasing dot size.  Furthermore, in realistic solids made from quantum dots with size variations, this structural disorder more strongly degrades the electronic performance relative to other factors.

This work quantifies the relative impacts of quantum dot size and size dispersity on important charge transport properties of materials synthesized by assembly of quantum dot components.  The results indicate that self-assembly of monodisperse quantum dots into electronically-coupled solids is a pathway to high-efficiency optoelectronic devices.