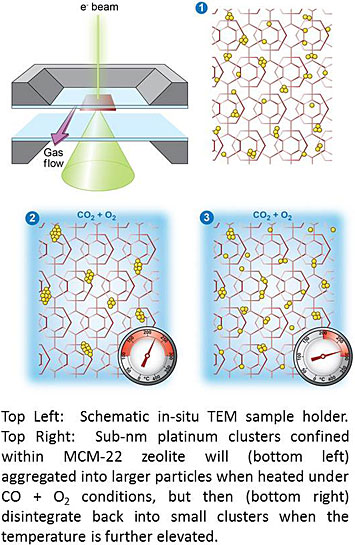 Observing dynamic structural transformations of sub-nm metal species under reaction conditions is helpful for understanding catalytic phenomena and for developing more efficient/stable catalysts based on single atoms and clusters.

Understanding the behavior and dynamic structural transformation of subnanometric metal species under reaction conditions will be helpful for understanding catalytic phenomena and for developing more efficient and stable catalysts based on single atoms and clusters. In this work, the evolution and stabilization of subnanometric Pt species confined in MCM-22 zeolite has been studied by in situ transmission electron microscopy (TEM). By correlating the results from in situ TEM studies and the results obtained in a continuous fix-bed reactor, it has been possible to delimitate the factors that control the dynamic agglomeration and redispersion behavior of metal species under reaction conditions. The dynamic reversible transformation between atomically dispersed Pt species and clusters/nanoparticles during CO oxidation at different temperatures has been elucidated. It has also been confirmed that subnanometric Pt clusters can be stabilized in MCM-22 crystallites during NO reduction with CO and H2.

This work has been supported by the European Union through the European Research Council (grant ERC-AdG-2014-671093, SynCatMatch) and the Spanish government through the “Severo Ochoa Program” (SEV-2016-0683).  The in situ TEM experiments were performed in the Center for Functional Nanomaterials, which is a US DOE Office of Science User Facility, at Brookhaven National Laboratory under contract number DESC0012704. The HAADF-HRSTEM studies have been conducted in the Laboratorio de Microscopias Avanzadas (LMA) at the Instituto de Nanociencia de Aragon (INA)-Universidad de Zaragoza (Spain), Spanish ICTS National facility.  R.A. gratefully acknowledges the support from the Spanish Ministry of Economy and Competitiveness (MINECO) through project grant MAT2016- 79776-P (AEI/FEDER, UE).