Measuring "The Impossible" X-ray Photoelectron Spectroscopy of Hydrogen and Helium 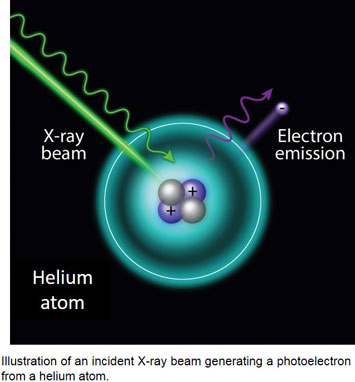 CFN and Harvard University scientists obtained the first-ever X-ray photoelectron spectroscopy spectra of hydrogen and helium, making use of the high flux of X-rays at the 23-ID-2 beamline of NSLS-II. The hydrogen molecule vibrational structure is evident in the H2 1s spectrum.

These results disprove misconceptions that it is impossible to obtain XPS spectra of elements lighter than lithium due to low probabilities of electron photoejection from these elements.  Unparalleled NSLS-II brightness makes possible the use of XPS to directly study the two most abundant elements in the universe.

The scientific literature contains many claims of the impossibility of measuring X-ray photoelectron spectra for the light elements hydrogen and helium, which is true when using lab-based X-ray sources. However, this limitation is technical and not fundamental — it is primarily related to the low X-ray photoionization cross-sections of the 1s orbitals of hydrogen and helium. In this work, we show that a sufficiently-bright synchrotron X-ray source such as the National Synchrotron Light Source II makes possible the use of ambient pressure X-ray photoelectron spectroscopy (XPS) for studies of these light, abundant elements. This result has important implications for understanding the ultimate limitations of one of the most useful techniques in materials science.  Moreover, it potentially makes the technique of XPS useful for direct studies of the two most abundant elements in the universe.

The ambient-pressure X-ray photoelectron spectroscopy instrument, operated in partnership between CFN and NSLS-II, was used to obtain XPS spectra.  The CFN Theory and Computation facility was used to assess the hydrogen adsorption on a Pt crystal.

Research carried out at the Center for Functional Nanomaterials and National Synchrotron Light Source II, which is supported by the U.S. Department of Energy, Office of Basic Energy Sciences, under Contract No. DE-SC0012704. This research used resources of the National Energy Research Scienti?c Computing Center, a DOE Of?ce of Science User Facility supported by the Of?ce of Science of the U.S. Department of Energy under Contract No. DE-AC02-05CH11231.