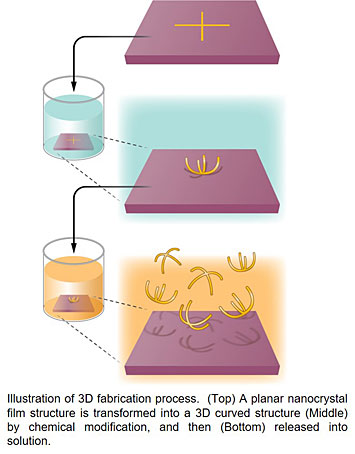 CFN users from the University of Pennsylvania have developed a new method for fabricating 3D cell-sized machines from colloidal nanocrystal films.  Manipulating the organic ligands that cap the nanocrystals in a thin film introduces controlled strain, which causes fabricated structures to “fold-up” into 3D configurations.

This strategy may be used to fabricate 3D, cell-sized machines with unique integrated optical and magnetic properties derived from the nanocrystal constituents. Potential examples are helical structures for plasmonic metasurfaces and claw-shaped structures for capturing tumor cells and bacteria.

The authors are grateful for primary support of this work from the National Science Foundation (NSF) under Award No. CMMI-1562884 for hetero-structure fabrication and characterization. Synthesis of Au nanocrystals was supported by National Science Foundation Grant No. NSF-561658, and synthesis of magnetic nanocrystals was supported by the Catalysis Center for Energy Innovation, an Energy Frontier Research Center funded by the U.S. Department of Energy, Office of Basic Energy Sciences under Award no. DE-SC0001004.  E-beam lithography to pattern the nanoimprint lithography master stamp was carried out at the Center for Functional Nanomaterials, Brookhaven National Laboratory, which is supported by the U.S. Department of Energy, Office of Basic Energy Sciences, under Contract No. DE-AC02-98CH10886. Electron tomography was performed at Karlsruhe Nano Micro Facility (KNMF), Karlsruhe Institute of Technology (KIT).  MZ is grateful for support from the NatureNet Science Fellowship offered by the Nature Conservancy.  JG was supported by Chinese Scholarship Counsel (CSC).  YY was supported by Penn’s Department of Materials Science and Engineering Masters Scholars Award. Scanning electron microscopy/FIB was performed in facilities supported by the NSF MRSEC Program under Award No. DMR-1720530