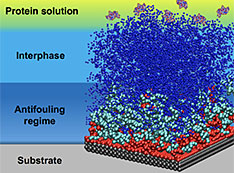 Schematic of polymer thin film interacting with a protein solution.

CFN users from Stony Brook University and their collaborators from the CNMS at Oak Ridge Lab performed experiments and simulations to reveal a new understanding of the mechanism endowing polymer films with protein-repellent properties. These studies show that polymer films thinner than about 20 nanometers strongly inhibit protein absorption, while thicker films become less effective.

Accumulation of biological matter on surfaces, called biofouling, is undesirable in applications ranging from medical implants to aircraft carrier hulls. These results provide new insights into structure-driven protein adsorption under nanoconfinement that will aid in the design of versatile antifouling coatings using common polymers — with important economic and environmental impacts.

Antifouling is the process of inhibiting unwanted adsorption of foreign substances on a material. Polymers have been used to develop an effective and relatively inexpensive method of formulating products with antifouling properties. It has been believed that interfacial water molecules, which strongly interact with hydrophilic polymer surfaces, act as a barrier against protein adsorption. Here, the authors reveal ultrathin polymer films with protein-repellent properties considered to be of structural origin and generalizable across homopolymer systems. Ultrathin homopolymer films composed of polystyrene (PS), poly(2-vinyl pyridine) (P2VP), poly(methyl methacrylate) (PMMA), and polybutadiene (PB) were subject to protein adsorption tests against two model plasma proteins: bovine serum albumin (BSA) and fibrinogen. These proteins were chemically marked with a fluorescence molecule, which was detected with the PC1 spectrofluorometer at the CFN. Working with CFN scientists, the team successfully measured the adsorption profiles with respect to the film thickness.

The work was partially supported by American Chemical Society Petroleum Research Fund. This research used resources of the Center for Functional Nanomaterials and the National Synchrotron Light Source II, which are U.S. DOE Office of Science Facilities, at Brookhaven National Laboratory under Contract No. DE-SC0012704. The computational/simulations aspect of this work was performed at the Center for Nanophase Materials Sciences, a U.S. Department of Energy Office of Science User Facility. This research also used resources of the Oak Ridge Leadership Computing Facility, which is a DOE Office of Science User Facility supported under Contract DE-AC05-00OR22725.