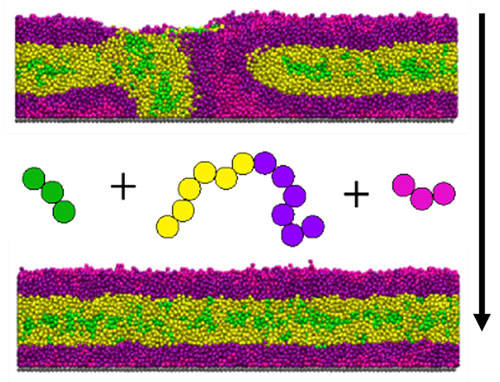 Simulations confirm that compositional changes affect the morphology of a ternary blend. The figure shows a blend of block copolymers with homopolymers to achieve control over features in blends with three or more components.

A detailed understanding of composition and film thickness effects can enable prescriptive control over self-assembled morphology for applications in nanolithography, membrane separations, and nanomaterial synthesis.

Films of self-assembled block copolymers and polymer blends hold promise for facile and inexpensive nanopatterning over large areas but dictating the desired nanoscale features in blends with three or more components requires the exploration of a vast parameter space including film thickness, blend composition, and molar mass. This work utilizes a new workflow developed at CFN for creating combinatorial samples with gradient composition using electrospray deposition (ESD) and gradient film thicknesses using flow coating. Combined with grazing-incidence small-angle X-ray scattering and scanning electron microscopy, multicomponent polymer blends were characterized in a high-throughput and systematic manner.  The results demonstrate that blending homopolymers with block copolymers may increase or reduce self-assembled domain spacings depending on the homopolymer’s molar masses. More surprisingly, the measured domain spacing in blends also depends on film thickness.  Coarse-grained molecular dynamics simulation indicate that the observed dependence of domain spacing on film thickness is a potential consequence of changes in the vertical homopolymer composition profile in thicker films during lamellae reorientation. This detailed understanding will help enable prescriptive control over the size, spacing, and orientation of self-assembled domains in block copolymer/homopolymer blend films, which is of paramount importance for application to nanolithography, membrane separations, and the functional nanomaterial synthesis.

The CFN Material Synthesis & Characterization Facilities were used to prepare and image combinatorial samples that were characterized by X-ray scattering at the CMS beamline, which is operated in partnership between NSLS-II and CFN.

This research was carried out at the Center for Functional Nanomaterials, the National Synchrotron Light Source II, and the Scientific Data and Computing Center (a component of the Computational Science Initiative) at Brookhaven National Laboratory, which are supported by the U.S. Department of Energy (DOE) Office of Science under Contract DE-SC0012704. K.T. acknowledges NSF support through a Graduate Research Fellowship DGE-1122492 and INTERN supplement to CBET-1703494. C. O. acknowledges NSF support through DMR-1410568.