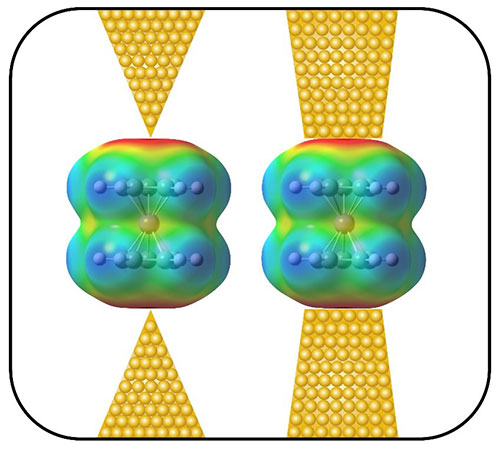 A team of CFN users and staff formed single molecule circuits with single metallocenes and gold electrodes. They found that barrel shaped metallocenes bind to gold without need for chemical link groups and exhibit extended conductance plateaus.  Metallocenes bind more strongly to a dull tip, compared to a sharp one.

What is the Significance and Impact?

Understanding how metallocenes form junctions differently from the more widely studied, rod shaped molecular wires can allow for further manipulation and tunability of these single-molecule circuits.

Single molecule circuits are formed by trapping group 8 metallocenes between nanoscale gold electrodes. Metallocenes, which incorporate a single transition metal ion within an organic framework, are tunable through the choice of transition metal and have been shown to exhibit interesting transport phenomena in single molecule circuits, including current rectification and spin filtration.  The present study investigates the impact of junction bonding motifs enabled by the electron-rich rings inherent to the metallocene structure.

Experiments are performed using the Scanning Tunnelling Microscope (STM)-based break junction technique. In this approach, a gold tip is initially pressed into a gold substrate, then pulled apart, in the presence of the target molecules, until the metal-metal contact ruptures leaving a molecule scale gap that can be filled by the target molecule.  In the present measurement protocol, the tip is withdrawn further, rupturing the single molecule junction.  It is then pushed back towards the substrate, allowing for a junction to reform, initially bridged by a molecule, but terminating when metal-metal contact is restored.  Current flow is monitored throughout the experiment, characterizing the nanoscale structure of the contact region and its conducting properties.

Measurements at cryogenic temperature were performed at the Center for Functional Nanomaterials (CFN) by Professor Kamenetska and her student Brent Lawson under a user project with CFN working with staff member Percy Zahl. Room temperature measurements were carried out at Boston University by Lawson and Kamenetska. Density functional theory (DFT) based calculations were carried out by Lawson at Boston University under the supervision of CFN staff member Mark Hybertsen for model electrode structures to provide an atomic-scale picture of junction characteristics for several scenarios.

Typical single molecule circuits are formed from rod-like molecules that bond to the gold electrodes through specific chemical link groups.  In this study, metallocenes without link groups are shown to reproducibly form junctions through direct gold-π binding motif.  The measurement technique under cryogenic conditions tracks the junction through the full cycle of extension and compression. Analysis reveals that junction persistence when the metal electrodes are pushed together correlates with whether electrodes are locally sharp or blunt, suggesting distinct scenarios for metallocene junction formation and evolution. The top and bottom surfaces of the “barrel” shaped metallocenes present the electron-rich π system of cyclopentadienyl rings which interacts with the gold electrodes in two distinct ways. An undercoordinated gold atom on a sharp tip forms a donor-acceptor bond to a specific carbon atom in the ring. However, a small, flat patch on a dull tip can bind more strongly to the ring through Van der Waals interactions.

The calculations demonstrate the role of these bonding motifs during junction evolution and showing that the conductance is relatively independent of tip atomic-scale structure. The non-specific interaction of the cyclopentadienyl rings with the electrodes enables extended conductance plateaus, a mechanism distinct from that identified for the more commonly studied, rod-shaped organic molecular wires.

The bonding motifs identified in this study offer interesting opportunities to further manipulate the formation of single molecule junctions that incorporate a transition metal atom and tune the conductance characteristics.

This research used resources of the Center for Functional Nanomaterials (CFN), which is a U.S. Department of Energy Office of Science User Facility, at Brookhaven National Laboratory under contract No. DE-SC0012704. This work was supported by the Air Force Office of Scientific