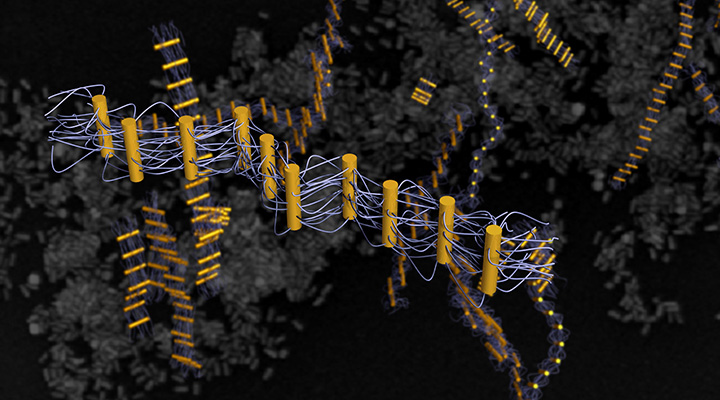 DNA-tethered nanorods link up like rungs on a ribbon-like ladder—a new mechanism for linear self-assembly that may be unique to the nanoscale.

The assembly of molecules and nanoscale objects into one-dimensional (1D) structures, such as fibers, tubules, and ribbons, typically results from anisotropic interactions of the constituents.  Conversely, we found that a 1D structure can emerge via a very different mechanism: the spontaneous symmetry breaking of interparticle interactions during structure formation.  For systems containing DNA-decorated nanoscale rods, this mechanism, driven by the flexible DNA chains, results in the formation of 1D ladder-like ribbons with a side-by-side rod arrangement.  Detailed structural studies using electron microscopy and in-situ small angle x-ray scattering (SAXS), and concurrent analysis of the assembly kinetics, reveal the role of collective DNA interactions in the formation of the linear structures.  Moreover, the reversibility of DNA binding facilitates the development of these hierarchical assemblies across time.  We also observed similar linear structures comprised of alternating rods and spheres, which implies that the discovered mechanism is generic for nanoscale objects interacting via flexible multiple linkers.

The observed emergence of lower dimensional structures, comprised of homogeneously functionalized objects, showcases the rich behavior that polymer grafted colloids possess in the regime for which the nanoparticle and the polymers are of comparable size.  The observed self-assembly mechanism can be used for the creation of optically-active nanomaterial architectures.

Research was carried out at the Center for Functional Nanomaterials, Brookhaven National Laboratory, which is supported by the U.S. Department of Energy, Office of Basic Energy Sciences, under Contract No. DE-AC02-98CH10886. S. Vial acknowledges support from International Iberian Nanotechnology Laboratory (INL) in Braga, Portugal.