Resolution Limits of Electron-beam Lithography Pushed Towards the Atomic Scale 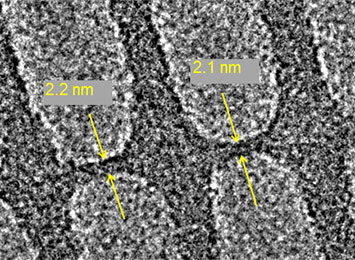 Electron-beam lithography (EBL) is a method of creating nanoscale patterns by exposing a resist to a focused source of electrons. We investigated the ultimate limits of EBL through the use of an aberration-corrected scanning transmission electron microscope (STEM). Optimization of electron exposure and resist development demonstrated the ability to create features of 2 nm in size – roughly 10 atoms wide.  This is the highest resolution ever achieved with this technique.

EBL has been used for the last 50 years as method to pattern nanoscale features and devices, and it continues to be broadly used in nanotechnology and industrial applications. It is essential to the field of nanotechnology for its sub-10-nm resolution, arbitrary patterning capabilities and fast prototyping. The practical resolution limit of current EBL methods is near 10 nm, but the future of research in nanotechnology increasingly requires top-down control at the few nanometer length scale. It is expected that the development of EBL methods at this length will impact a wide array of fields, including excitonics, plasmonics, nanoscale optics, molecular electronics, the placement of biomolecules and templated self-assembly.