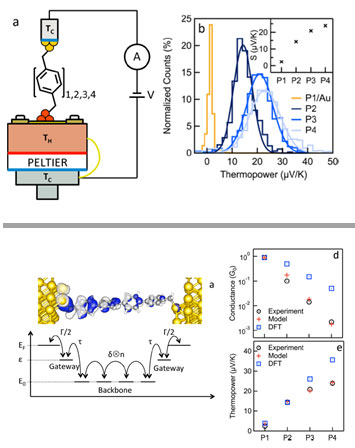 TOP: Schematic set-up for simultaneous measurement of conductance and thermopower (left). Measured histograms of thermopower for a series of oligophenyl backbone molecular junctions (right). BOTTOM: Theoretical simulation of the transmitted wave incident from the left, entering the molecule through the Au-C bond orbital and then tunneling through the P4 backbone p states, together with a simplified quantum mechanical model (left). Comparison of experiment to DFT and model results (right).

Single molecule circuits possess high electrical conductivity and exhibit the characteristics to generate electricity from heat sources, a phenomenon called thermoelectricity. This research demonstrates that these organic molecules can have exceptionally large thermoelectric properties that can be exploited.

Overall project coordination, measurements, and sample synthesis were supported as part of the Center for Re-Defining Photovoltaic Efficiency Through Molecular-Scale Control, an Energy Frontier Research Center funded by the U.S. Department of Energy (DOE), Office of Science, Office of Basic Energy Sciences under Award DE-SC0001085.  Part of this work was carried out at the Center for Functional Nanomaterials, Brookhaven National Laboratory, which is supported by the U.S. Department of Energy, Office of Basic Energy Sciences, under contract no. DE-AC02-98CH10886. H.V. and T.K. were supported through the Nanoscience and Engineering center by the New York State Office of Science, Technology, and Academic Research (NYSTAR). L.V. thanks the Packard Foundation for support.