Through development of a new dynamic imaging technique, we have measured the non-adiabaticity parameter in permalloy and studied its effect on resonant magnetic vortex motion.  This parameter is an intrinsic material property of the materials system that places upper limits on the switching speed of spintronic devices.  The high value measured in our work shows promise for future high-speed spintronic applications.

The performance of many spintronic devices is limited by the speed at which magnetic domain walls can be manipulated within a material.  A phenomenon, known as non-adiabatic spin torque, poses one such limit.  In this work, we measured with high precision a very large non-adiabatic parameter, indicating that high switching speeds are achievable.

Experimental setup and sample images. (a) Schematic layout of the TEMholder assembly with its actual image in the inset. A high-frequency signal is supplied externally through a coaxial cable (brown) and a copper waveguide (gold). The waveguide is wire bonded to gold contact pads on the silicon nitride Si3N4 membrane (blue). (b) Connection diagram of the in situ TEMexcitation experiments. (c) A scanning electron microscopy image of the permalloy square and Cr/Au contact pads fabricated on the membranes. Scale bar, 1 μm. (d) Lorentz micrograph of the permalloy square showing the remnant state Landau domain structure. The arrows indicate the direction of the magnetization within each domain. Scale bar, 500 nm. (e) Linescan across the vortex core (indicated by the white line in d). The full width at half maximum of the vortex core is about 21 nm. The magnetic imaging resolution of the instrument is 1 nm, thus the accuracy of the vortex core positions in the experiments is not limited by the instrument. 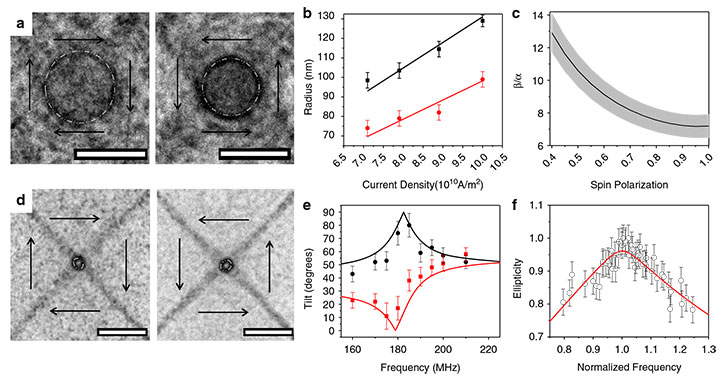 Vortex core precession orbits due to the adiabatic, nonadiabatic and Oersted field contributions. (a) Experimental images of the vortex precession at resonance (170 MHz) at a current density of 1×1011 A m − 2. Clear differences in orbit amplitude are visible for vortices of CW (left) and CCW (right) chirality. The white dashed circles are a guide to the eye, and arrows indicate the sense of rotation of the vortex. Scale bar, 250 nm. (b) Orbit radius at resonance versus current density. The values are extracted from images of the orbit sizes at resonance. Red (black) points are from CCW (CW) vortices. A fit to these data (solid lines) yields a non-adiabatic parameter β = (9.2 ± 0.8)α and an Oersted field per unit current of 1.62×10 − 11 ± 0.03×10 − 11 Oe m2 A − 1 (1.3 Oe for a current density jo of 7.9×1010 A m − 2). (c) Experimentally determined β/α versus assumed spin polarization. The ratio ranges from ~7 to 13, showing a clear lower limit for β. The error band corresponds to the uncertainty in β obtained from fits to the experimental amplitude versus jo data assuming a given value of spin polarization. (d) Off-resonance orbits at 200 MHz for vortices of (polarity = + 1, CW) and (polarity = + 1, CCW). The tilts of the orbit differ measurably, as predicted by theory. Black arrows indicate the sense of rotation of the vortex, while white dashed circles are superimposed on the vortex orbit to guide the eye. Scale bar, 250 nm. (e) Measured tilt from the current direction versus frequency for the same element at jo = 7.9×1010 A m − 2. The small shift in resonance frequency from that of a current density of 1×1011 A m − 2 is due to Joule heating. (f) Ellipticity (defined as short axis/long axis) versus normalized frequency for CCW chiralities with a theoretical prediction superimposed (solid line). The characteristics of the vortex orbit at off-res

The work was carried out at the Department of Condensed Matter Physics, Brookhaven National Laboratory (BNL), and was supported by the US Department of Energy, Office of Basic Energy Science, under contract no. DE-AC02-98CH10886, and K.S.B. was supported by the NSF award number 0907706. Assistance from Anthony T. Bollinger on wire bonding and the use of Center for Functional Nanomaterials’ facilities at BNL are greatly acknowledged.