The Mechanism of Caesium Intercalation of Graphene 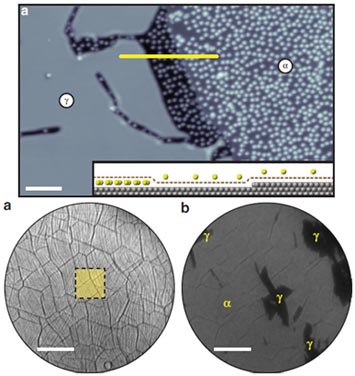 Intercalation of Cs of graphene monolayer on Ir(111) : A) An scanning tunneling microscopy topograph showing two characteristic areas found after the deposition of 0.5ML of Cs: the adatom γ-phase (marked as α) and the intercalated γ-phase (marked as γ). B) Low energy electron microscopy topographs of an uniform e-Gr ML on Ir(111) showing characteristic surface features: graphene wrinkles and substrate steps, and the same area as after deposition of 0.2 ML of Cs – moderate decrease (γ-phase) and a strong decrease (γ-phase) in contrast (electron reflectivity) are visible.

Properties of many layered materials, including copper- and iron-based superconductors, topological insulators, graphite and epitaxial graphene, can be manipulated by the inclusion of different atomic and molecular species between the layers via a process known as intercalation. Intercalation involves complex diffusion processes along and across the layers; however, the microscopic mechanisms and dynamics of these processes are not well understood. Using in-situ microscopy to follow the intercalation process of caesium (Cs) of graphene monolayer on iridium (111) surface we discovered a novel mechanism for intercalation and entrapment of alkali atoms under epitaxial graphene. We find that the intercalation is adjusted by the van der Waals interaction, with the dynamics governed by defects anchored to graphene wrinkles.

There are many potentially useful properties associated with the intercalation of epitaxial graphene systems. For instance, it was demonstrated that by precise control of the intercalation interface, laterally well-defined mesoscopic regions of n- and p-doped graphene—that is, p–n graphene junctions, can be formed. It was also demonstrated that it is possible to form well-defined ferromagnetic nano-islands under graphene. Therefore, it is extremely important to understand in detail how the properties of chemically modified graphene depend on its chemical environment. From the view point of chemical kinetics, understanding the penetration and diffusion of ions under graphene sheets in atomistic detail is of fundamental importance for the design of novel batteries and supercapacitors.

The mechanism of caesium intercalation of grapheme

We acknowledge experimental assistance by F. Craes and J. Klinkhammer. This work was supported by the Unity Through Knowledge Fund (grant no. 66/10), the Deutsche Forschungsgemeinschaft (projects Bu2197/2 and INST 2156/514-1), the Ministry of Science and Technology of the Republic of Croatia (contract no. 098-0352828-2863) and by the German Academic Exchange Service and Ministry of Science of the Republic of Croatia via the project ‘Electrons in two dimensions’. Research carried out at the Center for Functional Nanomaterials and National Synchrotron Light Source, Brookhaven National Laboratory is supported by the U.S. Department of Energy, Office of Basic Energy Sciences, under the Contract No. DE-AC02-98CH10886.