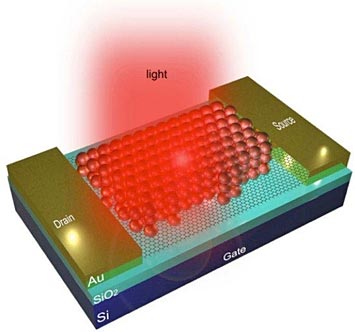 Schematic of a quantum dot-graphene nano-photonic device, as described in this research project.

Semiconductor quantum dots (QDs) are nanoscale semiconductors that exhibit size dependent physical properties. For example, the color (wavelength) of light that they absorb changes dramatically as the diameter decreases. Graphene is an atomically thick sheet of carbon atoms, arranged in a hexagonal lattice pattern. In this work, QDs have been combined with graphene to develop nanoscale photonic devices that can dramatically improve our ability to detect light. Quantum dots can absorb light and transfer it to graphene, but the efficiency of the transfer depends on how far the QDs and the graphene are separated from each other. This study demonstrated that the thickness of the organic molecule layer that typically surrounds the QDs is crucial in attaining sufficiently high efficiency of this light/energy transfer into the graphene. In other works, the thinner the organic layer, the better. This transfer can be further optimized by engineering the interface between the two nanomaterials, specifically optimizing the thickness of the organic capping molecules on the quantum dots. Based on this work, further improvement of the performance of these nano-photonic devices can be expected.

a) Schematic of a chloride-terminated CdSe quantum dot. b) A high resolution transmission electron microscopy image of such quantum dots.

Commercial cadmium selenide (CdSe) quantum dots have long insulating organic ligands that prevent their utilization in energy and charge transfer applications for which short distances between the QDs and other materials are critical.  Short, chlorine ligands that passivated CdSe QDs are an intriguing alternative material to enhance the interaction with materials into which charge carriers, such as electrons, can easily conduct.  Graphene is such a material.  The combination of CdSe quantum dots and graphene could hold the key to the development and implementation of nanoscale materials systems in flexible electronics and photodetectors. 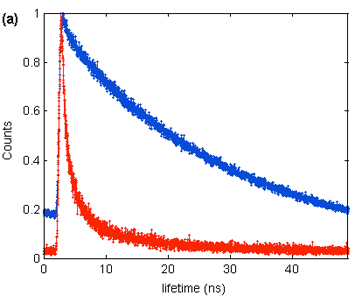