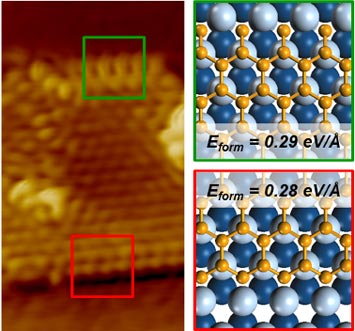 Through high resolution scanning tunneling microscopy measurements and first principles Density Functional Theory based calculations, a novel atomic scale edge structure was shown to be stable for graphene islands grown on cobalt surfaces.  The low-coordinated carbon atom at the Klein edge structure is stabilized by interaction with the cobalt surface.  This is the first demonstration, combining experiment and theory, that the interaction of the carbon atoms with a metal substrate stabilizes the low coordinated carbon edge atoms.  In models for the growth of graphene on metal substrates, such low coordinated atoms at the growing edge play a special role.  These results, which demonstrate such stability, will play a significant role in further development of these models and will help guide future strategies to grow graphene nanostructures with atomic scale control of edge structure.

A leading method to produce graphene nanostructures with potential for new electronic devices involves chemical reactions and growth of the one-atom thick graphene on metal surfaces.  Low-coordinated carbon atoms at the growing edge play a key role in leading models for the growth mechanism.  This work can lead to improved growth and the needed atomic-scale control of structure.

We thank M. Lefenfeld for contributions to the early phases of the experiments reported here. This work was supported by the U.S. Department of Energy (DE-FG02-88-ER13937 to G.W.F., DE-FG02-07ER15842 to T.F.H., and DE-AC02-98CH10886 to M.S.H.), by the National Science Foundation through the NSEC Program (CHE-06-41523), by the New York State Office of Science, Technology, and Academic Research (NYSTAR), by the Air Force Office of Scientific Research (MURI FA955009-1-0705), and by the Italian Ministry of Research (Grant No. PRIN-20105ZZTSE to D.P.). Research was conducted in part with facilities of CINECA and in part with facilities of the Center for Functional Nanomaterials at Brookhaven National Laboratory, supported by the U.S. Department of Energy, Office of Basic Energy Sciences, under contract number DE-AC02-98CH10886.  Equipment and material support were provided by the National Science Foundation through Grant CHE-10-12058 (to G.W.F.).