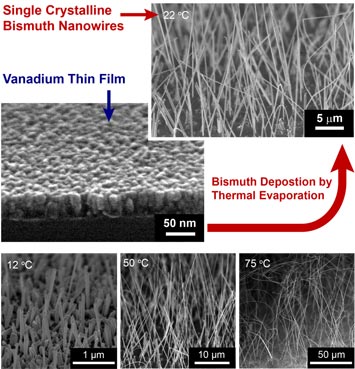 By adjusting the substrate temperature, the thickness and length of the bismuth nanowires can be tuned over very wide ranges (60-400 nm) and (1- >100 mm), respectively.

Bismuth nanowires have intriguing electronic and energy-harvesting application possibilities. However, fabricating these materials with high quality and in large quantities is challenging. A group at the CFN has demonstrated a new technique to produce single- crystal nanowires atop arbitrary substrates, including glass, silicon, and metal, when an intermediate layer of vanadium is present.  The simplicity of the technique and the universality of the mechanism open a new avenue for the growth of nanowire arrays of a variety of materials.

This is the first report on the high yield (>70%) synthesis of single crystalline bismuth nanowires, a material with potentially exploitable and intriguing thermoelectric properties.  This technique produces bismuth nanowires in quantities limited only by the size of the substrate on which they are deposited.  The dimensions of the bismuth nanowires can be tuned over a very wide range simply by varying the substrate’s temperature.  Further, in contrast with other fabrication methods, with this new technique there is no need for a catalyst to activate the production of the nanowires, thus avoiding inevitable contamination and enabling high-quality material. 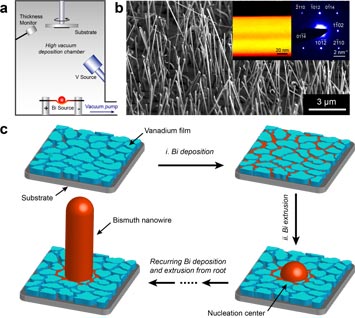 Research was carried out at the Center for Functional Nanomaterials, Brookhaven National Laboratory, which is supported by the U.S. Department of Energy, Office of Basic Energy Sciences, under Contract No. DE-AC02-98CH10886.  We thank Drs. Kevin Yager and Dmytro Nykypanchuk for helpful discussions on the X-ray reflectivity measurements.