Rust never sleeps. Whether a reference to the 1979 Neil Young album or a product designed to protect metal surfaces, the phrase invokes the idea that corrosion from oxidation—the more general chemical name for rust and other reactions of metal with oxygen—is an inevitable, persistent process. But a new study performed at the Center for Functional Nanomaterials (CFN) at the U.S. Department of Energy’s (DOE) Brookhaven National Laboratory reveals that certain features of metal surfaces can stop the process of oxidation in its tracks.  The findings, published in the Proceedings of the National Academy of Sciences, could be relevant to understanding and perhaps controlling oxidation in a wide range of materials—from catalysts to the superalloys used in jet engine turbines and the oxides in microelectronics.  The team used a low-energy electron microscope (LEEM) to capture changes in the surface structure of a nickel-aluminum alloy as “stripes” of metal oxide formed and grew under a range of elevated temperatures.  The metal Zhou wanted to study, nickel-aluminum, has a characteristic common to all crystal surfaces: a stepped structure composed of a series of flat terraces at different heights. The steps between terraces are only one atom high, but they can have a significant effect on material properties. Being able to see the steps and how they change is essential to understanding how the surface will behave in different environments, in this case in response to oxygen. 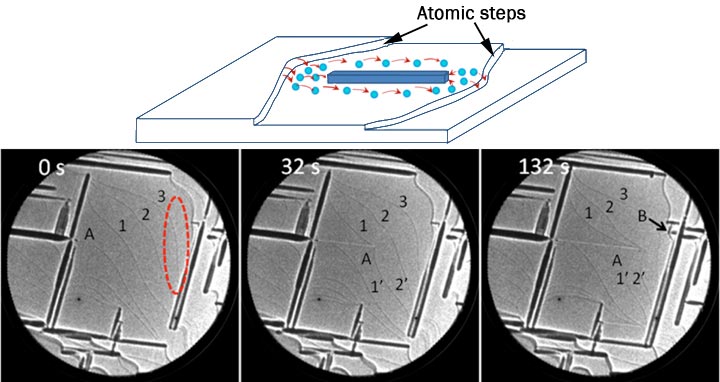 (top) Schematic of the surface of a Ni-Al alloy with atomic-height surface steps, present on all crystalline materials. Aluminum oxide (Al2O3) grows by incorporating aluminum atoms released from the steps. As the oxide encounters a step, its further growth becomes inhibited. (bottom) In-situ microscopy image sequence illustrating the encounter of an Al2O3 stripe ('A') with surface steps (faint black lines).

While the formation of thicker oxide layers has been studied extensively, the initial stages of surface oxidation remain poorly understood, particularly for complex materials such as metal alloys. The findings of this study demonstrate that atomic-height steps can play a key role in limiting the onset of oxidation.  This points to new avenues for controlling metal oxidation in applications ranging from catalysis to corrosion protection and microelectronics.