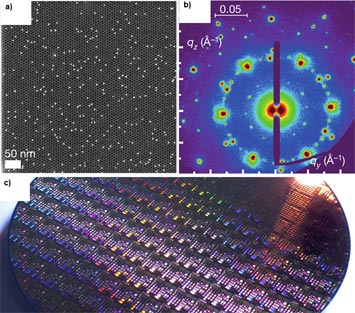 a) Transmission electron microscopy image of the nanoparticle superlattice with doping nanoparticles. b) TSAXS pattern of the superlattice. The well-defined peaks arise because of the excellent order of the crystal. c) This work is a nanoscale analogue of semiconductor doping, a keystone of the microelectronics industry.

Silicon semiconductors form the basis of all modern electronics and microprocessors. Crucial to these applications is the ability to ‘dope’ the semiconductor; which is to say, by controllably adding impurity atoms to a semiconductor, one can continuously vary its electronic and optical properties. A recent collaboration of scientists from the University of Pennsylvania and NIST has demonstrated for the first time, a unique nanoscale analogue. In particular, nanoscale crystals are created by assembling nanoparticles into close-packed arrangements (so-called ‘nanoparticle superlattices’). In this work, the assembly is performed with controlled amounts of ‘impurity’ nanoparticles that differ from those used to form the host crystal. The resulting superlattices are ‘doped’, and exhibit properties that depend sensitively on the concentration and intrinsic behavior of the dopant particles. In one example, by controlling the concentration of doping gold nanoparticles (into a crystal of lead selenide nanoparticles), the conductivity could be tuned over 6 orders-of-magnitude. To characterize the ordering in these nanomaterials, x-ray scattering measurements were performed at the X9 beamline (NSLS), which is co-managed by the CFN. This ability to rationally tune the properties of superlattices will be crucial to future applications of optical and electronic materials.

This work received support from the Office of Naval Research MURI program (award number ONR-N00014-10-1-0942), and from the US Department of Energy Office of Basic Energy Sciences, Division of Materials Science and Engineering (award number DE-SC0002158). Research was carried out in part at the Center for Functional Nanomaterials, Brookhaven National Laboratory under contract No. DE-SC0012704.