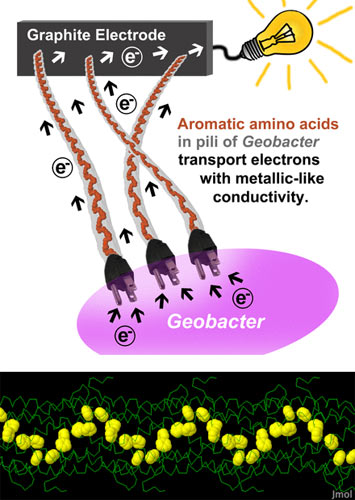 Although proteins are usually electrically insulating, hair-like, protein-based nano-filaments (called pili) on the surface of Geobacter bacteria have been found to exhibit metallic-like conductivity. Recently, scientists from U. Mass Amherst, Holy Cross, and BNL used X-ray diffraction to analyze the distribution and spacing of aromatic amino acids in the pili and compared this data with that of mutated pili, which lack these specific amino acids.  The amino acids in the normal pili were found to be spaced within 3 Å of each other, enabling strong π-orbital overlap among the amino acids.  This finding sheds considerable light onto why the pili’s conductivity is comparable to that of copper.  This information is expected to be useful in the design of novel bioelectronic materials.

This finding could be exploited to enhance the electron transport properties of pili through genetic engineering, which subsequently can be employed for bioelectricity generation and bioremediation. Moreover, non-toxic and inexpensive nano-electronic devices, based on these filaments, could be readily realized.

CFN Capabilities: The CFN Materials Synthesis and Characterization Facility’s X-ray diffraction system was used to measure the distances between aromatic residues in pili, which confirmed the plausibility of the π-orbital origin of the enhanced conductivity.

Research was carried out in part at the Center for Functional Nanomaterials, Brookhaven National Laboratory, which is supported by the U.S. Department of Energy, Office of Basic Energy Sciences, under Contract No. DE-AC02-98CH10886. This research was supported by the Office of Naval Research (grant no. N00014-12-1-0229 and N00014-13-1-0550), the Office of Science (BER) and US Department of Energy (award no. DE-SC0006790). Nikhil S. Malvankar holds a Career Award at the Scientific Interface from the Burroughs Wellcome Fund.