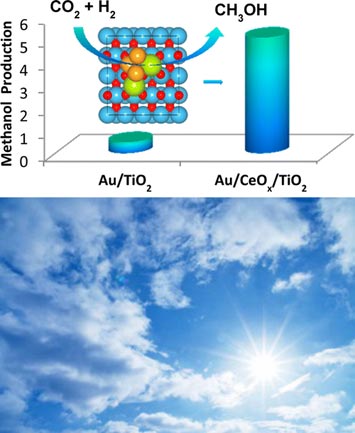 Top) Carbon dioxide molecules, the main component of greenhouse emissions, are converted into valuable methanol at the interface between Au nanoparticles and a mixed oxide (CeOx/TiO2) support under unprecedented low pressures of hydrogen. Bottom) This could lead to breakthroughs on greenhouse gas emission remediation.

The capture and recycling of carbon dioxide (CO2) not only prevents its emission into the atmosphere but also can lead to the production of valuable chemicals, such as methanol. This study demonstrates that gold (Au) nanoparticles anchored and stabilized on a substrate comprised of a mixture of ceria and titania (CeOx/TiO2) generates active centers for CO2 adsorption and can facilitate the subsequent conversion of CO2 into methanol at low environmental pressures. This study underscores the importance of the localized electronic properties and structure of catalysts for achieving high alcohol selectivity from CO2 hydrogenation.

CFN Capabilities: CFN’s Ambient Pressure Photoelectron Spectroscopy Endstation at X1A1 Beamline of NSLS (now at beamline CSX-2 of NSLS-II) was used to probe the role of CeOx and TiO2 in promoting the catalytic properties of Au.