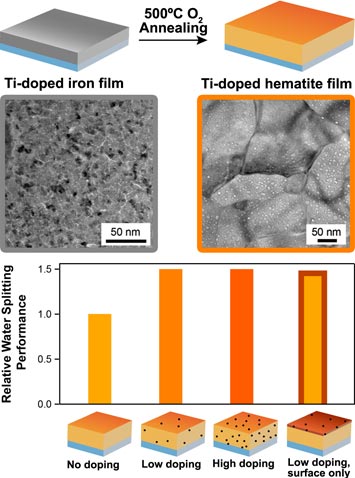 Top: The synthesis of hematite involves the thermal oxidation of a titanium-doped iron thin film deposited by magnetron sputtering. Bottom: Above a certain level, the concentration of titanium plays a moderate role in the enhancement of hematite's water splitting ability; doping location (on the surface of hematite) plays a more significant role, due to surface catalysis.

Hematite (a form of iron oxide) is a promising material to facilitate the splitting of water, using sunlight, into hydrogen and oxygen. Unfortunately, hematite’s low electrical conductivity and poor catalytic activity stand as a challenge to its wide implementation. The water splitting performance of hematite improves when titanium (Ti) is added as a dopant, but its role is not well understood. This work shows a new method to prepare hematite thin films with independent control of the doping species and doping levels, which has led to the highest ever water splitting photocurrent for hematite films. Contrary to conventional wisdom, their activity was optimized not in proportion with the Ti-doping amount, rather in correlation with the Ti-doping location, specifically along the surface of the hematite.

Titanium improves hematite’s ability to split water due largely to its catalytic role on the hematite surface, dispelling longstanding assumptions. Controlled titanium doping levels as low as 0.5 atom-% resulted in a 50% enhancement of the water splitting performance.

CFN Capabilities: CFN’s Materials Synthesis and Characterization Facility was used for the preparation and photocatalytic study of the hematite films. Their structural characterization was done at the Electron Microscopy Facility.