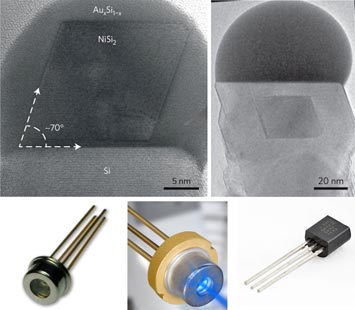 Top: High-resolution electron microscopy images of a nickel silicide rhombic nanocrystal embedded in a silicon nanowire prepared with gold silicide used as a catalyst. The images demonstrate the intimate interactions that arise at the interfaces of these nanomaterials. Bottom: The physical properties that arise from such complex nanosystems could be used in next-generation photodetectors, lasers, and transistors.

Semiconducting nanowires have a wide range of existing and potential applications in optoelectronic materials, from single-electron transistors and tunnel diodes, to light-emitting semiconducting nanowires to energy-harvesting devices.  An international collaboration led by the University of Cambridge and IBM, has demonstrated a new method to create novel nanowires that contain nanocrystals that are embedded within them.  This accomplished by modifying the classic “vapor-liquid-solid” crystal growth method, wherein a liquid phase catalyst is used to both decompose an incoming gas-phase source and mediate the deposition of the solid, growing nanowire. In this work, a bimetallic catalyst is used, and it was shown that by appropriate thermal treatment that it is possible to crystallize a solid silicide structure within the liquid catalyst, and then attach the nanowire to the solid silicon in a controlled epitaxial fashion.  This leads to exquisite control over these structures at the nanoscale, and opens up a wide range of potential device structures.

This development could lead to new classes of nanoscale devices, with a range of potential applications from single-electron transistors and tunnel diodes to photodetectors and semiconductor lasers.